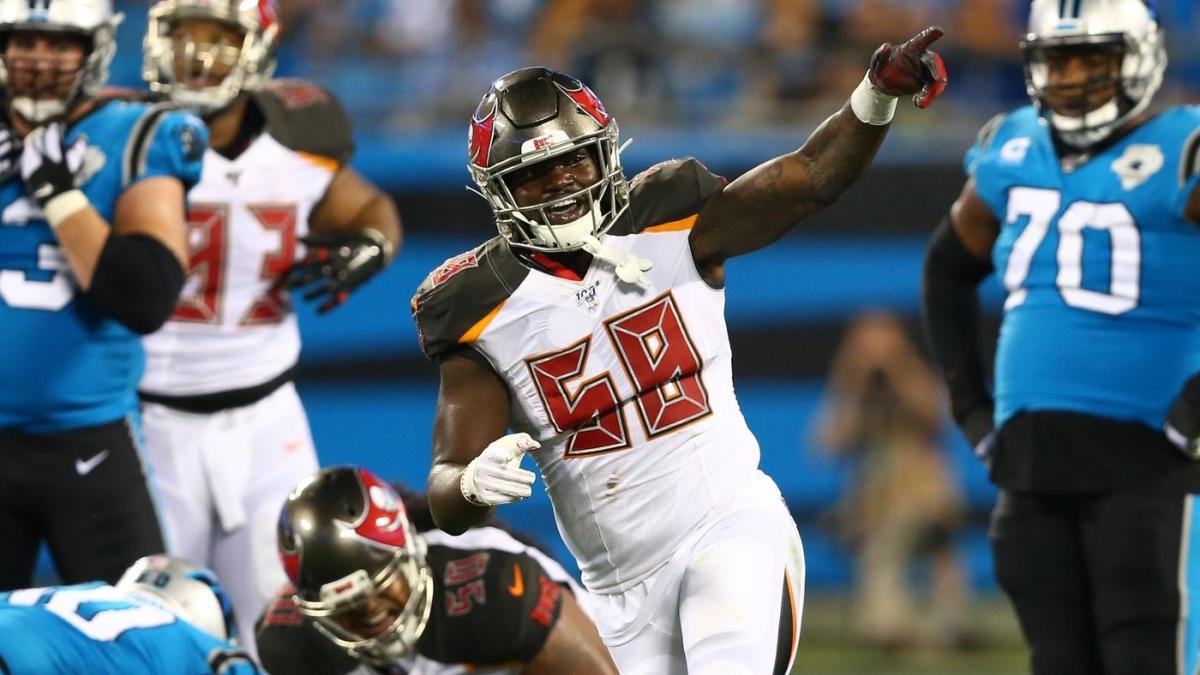 You’ve heard the phrase “trust the process” before and, quite honestly, probably ad nauseam if you’re fan of any major sport.

More often than not, however, things don’t usually pan out at the professional level, and that’s mostly because processes, personnel and personalities vary wildly across sports and teams. It takes a lot for all of the parts of a recipe to come together for a delicious outcome, as Tampa Bay Buccaneers linebacker Shaquil Barrett can most certainly attest.

Before Barrett even started his career in the league back in 2014, he ran into a massive stumbling block when playing Division II football for University of Nebraska-Omaha. The team ended it’s football program and left Barrett searching for a new collegiate home, which he found at Colorado State in 2011. He wasn’t an instant success there, though, and battled for two years to truly make a name for himself before finally breaking out in Year 3 — racking up 12 sacks and an interception en route to be named the 2013 Mountain West Conference Defensive Player of the Year.

Much like his collegiate career arc that included a team switch and several seasons of trusting the process to few results, Barrett went undrafted and signed with the Denver Broncos in 2014 with Gary Kubiak calling the coaching shots, but spent the majority of his rookie season on the practice squad after not surviving final roster cuts that August, and having seen zero game snaps that year.

Not one to give up, Barrett went back to the drawing board in 2015, improved dramatically — which included leading the Broncos in preseason sacks — and was finally awarded a shot to make his NFL debut. He went on to log 5.5 sacks in six starts in Year 2, and that was good enough to tie for third-most on an eventual Super Bowl-winning team behind only Von Miller and future Hall of Fame linebacker DeMarcus Ware.

Riding high on a wave of success, life brought Barrett crashing back down to earth in Year 3, when he had zero starts in 16 games and only 1.5 sacks in 2016. Again, it was back to the drawing board to determine how to level up and extend his promising NFL career, and he’d bounce back to a degree in 2017 under new head coach Vance Joseph, when Barrett upped his production to four sacks along with two forced fumbles and a fumble recovery in nine starts.

The Broncos had seen enough at that point to warrant keeping him in Mile High at least one more season, placing a second-round restricted free agent tender on him in 2018 that he’d go on to sign.

A bit of adversity again awaited him, though, as he’d take a slight step backward in 2018 — still delivering a respectable three sacks in another otherwise abysmal season for the Broncos as a team. Not long thereafter, Joseph was fired halfway into his four-year contract and the Barrett’s divorce with the team ended a five-year stretch filled with the highest of the highs and the lowest of the lows.

Hoping for a fresh start and a chance to again establish himself as a meaningful pass rusher, he signed a one-year prove-it deal with the Tampa Bay Buccaneers worth just $4 million, but the $3 million guaranteed was evidence of a market for his services outside of Central Florida. Barrett believed in what the Buccaneers were selling, which included the wooing of former Arizona Cardinals head coach Bruce Arians out of retirement and the subsequent hiring of Todd Bowles as defensive coordinator in 2019. His belief in the team’s plan along with their belief in Barrett’s talent has paid off like gangbusters this season, to say the very least.

Under Bowles, Barrett has flourished into a premier NFL pass rusher, and he currently leads the league with nine sacks over the first four games. That’s three more than second-place and former first-round pick Myles Garrett, and twice as many as perennial All-Pro linebacker Khalil Mack.

Is that to say Barrett is better than either? No, but it is to say he’s finally in the company of the best pass rushers in the NFL, and even though it’s his sixth year in the league — it feels like the 26-year-old is just getting started.

Barrett has been an absolute force of nature this season, and is sweetening his stock by adding three forced fumbles and an interception to the pot. He’s already started in each of the first four games and is playing 80% or more of the defensive snaps on average, as Bowles continually allows him time to find his groove, uninterrupted.

Now sitting at 2-2, the Buccaneers know Barrett is a key reason they have a chance at going above .500 in October, and he’ll look to continue wreaking havoc in Week 5 when they visit their rival New Orleans Saints. Barrett has only faced Sean Payton’s bunch once in his career, and he brought down Drew Brees for a sack in that contest. With Brees sidelined and despite the mobility of backup Teddy Bridgewater — as long as Arians and Bowles continue to leave Barrett unleashed — there’s no reason he shouldn’t continue his bullying ways in New Orleans, and against every other team put in front of him.

An unrestricted free agent in 2020, Barrett is finally in line for a monstrous payday, and one that could very well come with a Bucs logo attached. Finally, for the man who was once a kid without a collegiate football program to call home, and thanks in no small part to having the right chefs in the kitchen in Tampa — his NFL recipe is complete.

Dinner is served, and the City of Tampa can’t get enough of Barrett’s buffet.