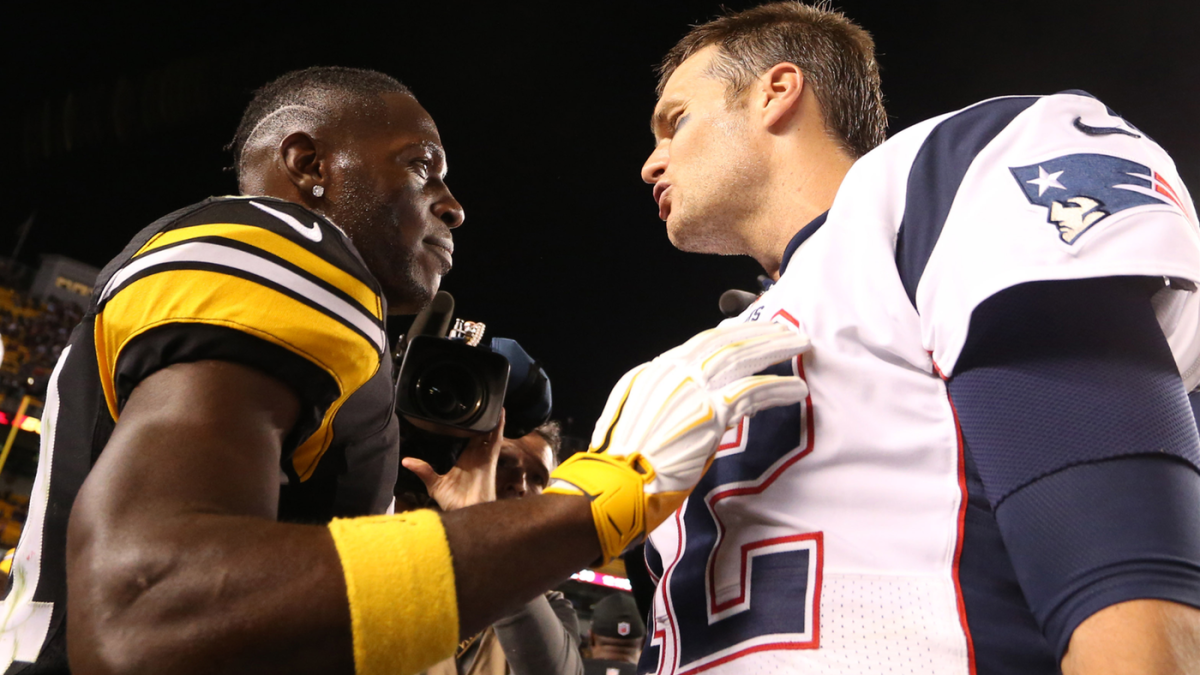 Antonio Brown officially become a member of the New England Patriots on Monday, signing a contract with the Patriots just two days after being released by the Oakland Raiders.

Hours after Brown officially became a Patriot, he apparently met up with Tom Brady, as a photo of the two appeared on social media on Monday night.

Brady, who reportedly offered to house Brown as he begins to get settled in New England, discussed the acquisition of Brown shortly after shredding the Steelers on Sunday Night Football. NBC Sports’ Al Michals said that, per Patriots owner Robert Kraft, that Brady told him that he was “1 million percent” behind the acquisition of Brown, the first receiver in NFL history to catch at least 100 passes in six consecutive seasons.

“Everyone comes in here and works as hard as they can to try to establish a great role and it’s about getting him up to speed,” Brady told NBC Sports’ Michele Tafoya. “He’s obviously a great player. I’ve played against him for a long time. We’re excited to have him and to try to incorporate him the best way he can.”

Brown will join a Patriots’ offense that toyed with Pittsburgh’s defense Sunday to the tune of 465 total yards in New England’s 33-3 rout of the Steelers. Brady, who improved to 6-0 at home against Pittsburgh in his career, completed 24 of his 36 throws for 341 yards and three touchdowns while completing passes to seven different Patriots.

A four-time All-Pro during his nine seasons in Pittsburgh, Brown will look to duplicate the success that Randy Moss had after he came to New England at about the same point in his career. During his first season with Brady, Moss caught an NFL record 23 touchdown passes while helping the Patriots become the only team in league history to go undefeated in a 16-game regular season. The success Moss enjoyed with Brady solidified his future status as a first-ballot member of the Pro Football Hall of Fame.

Donte’ Stallworth, a fellow receiver on New England’s 2007 team, believes that Brown can enjoy similar success with Brady while giving himself a chance to win his first Super Bowl ring.

“I really think he’ll be okay,” Stallworth told Pro Football Talk’s Peter King on Sunday night. “You’ve got to remember too that there’s something about playing with Brady. They’ll find things in common with each other.

“I know people are talking about the money he lost,” Stallworth continued. “Money’s great. But when you can be a Super Bowl contender, and when you can play for maybe the greatest coach ever in team sports, and you can play with the greatest quarterback, maybe ever, I’ll just tell you, the way players think, that is something money can’t buy. That appeals to players.

“Antonio’s got a once-in-a-lifetime opportunity. But when you get to New England, you have to accept being a cog in the wheel. I think if Antonio buys in, he’s going to have a great year. If he doesn’t, the experience will be over pretty quick.”

Brown’s first opportunity to play with Brady will likely come on Sunday in Miami — Brown’s hometown — against a team that just gave up 59 points to the Baltimore Ravens. In that game, Brown’s cousin, Ravens’ rookie wideout Marquise “Hollywood” Brown, caught four passes for 147 yards and two scores in his NFL debut.

Hollywood’s older cousin will look to have a similar performance this Sunday, his first game with Brady and the rest of the defending champions.