It’s Labor Day weekend, so with summer winding down, baseball’s playoff chase is heating up.

Here’s where our attention will be:

The four leading contenders for the second National League wild-card spot are paired up this weekend with Brewers-Cubs at Wrigley Field and Mets-Phillies in Philadelphia (that finale is on ESPN’s Sunday Night Baseball). Rank this foursome by likelihood to make the wild-card game.

Eddie Matz: I’m not jazzed about any of the teams in this foursome, but I guess that’s why they’re fighting for the Nationals’ scraps right now. The Brewers’ pitching staff is a dumpster wreck wrapped in a train fire — wait … strike that, reverse it — so they’re automatically fourth of four here. The Phillies are a sub-.500 club in the three months since Andrew McCutchen went down, which seems like a large enough sample size to trust. The Mets’ rotation is nails right now, but their remaining schedule is hairy and they literally can’t catch the baseball. That leaves the Cubs, who have the softest competition from here on out. So … (1) Cubs, (2) Mets, (3) Phillies, (4) Brewers. 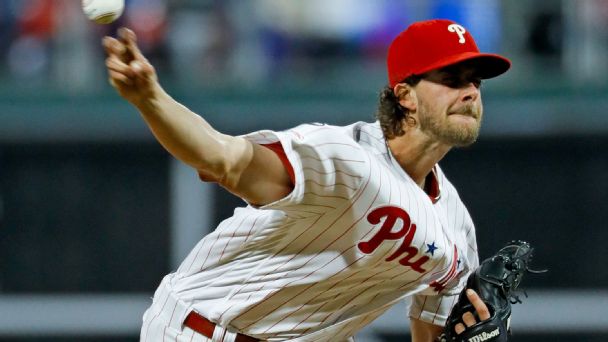 Brewers at Cubs, Fri., 2:20 p.m. — Milwaukee needs to win at least two of three at Wrigley as the Brew Crew comes in trailing the Cubs by four games in the wild-card hunt.
Mets at Phillies, Fri., 7:05 p.m. — Desperate to turn around a six-game losing streak, the Mets draw Phillies ace Aaron Nola, who is 6-1 with a 2.94 ERA at home.
A’s at Yankees, Sat., 1:05 p.m. — In eight starts with Oakland, Homer Bailey has had two clunkers but the other six have been solid. Can he keep the Bombers in the park?
Indians at Rays, Sun., 1:10 p.m. — Charlie Morton, who has been fading of late, goes for Tampa Bay in the finale of a key series in the AL playoff race.
Red Sox at Angels, Sun., 4:07 p.m. — Clinging to slim playoff chances, the Red Sox get lefty David Price back to help fill out a depleted rotation.
Mets at Phillies, Sun., 7 p.m. (ESPN) — By the end of this game, we should have a little more clarity on the NL wild-card picture. Unless we don’t.

Sam Miller: We’ve reached the period of the season where it’s all small samples left. There are about 28 games (depending on the team); remember who was in first place 28 games into this season? The Seattle Mariners. There’s just no maintaining order over 28 baseball games, which is really great news if you’re the worst of these teams (the Brewers) or the one with the toughest schedule (the Phillies), because “worst” and “toughest” are words that order-enforcers use. I’d rank them like this: Cubs, Mets, Phillies, Brewers, but absolutely nothing stops any of these teams from going 18-10 or 10-18, as .500ish-type teams do over 28-game stretches all the time.

David Schoenfield: I look at the Phillies and see an injured list that includes Jake Arrieta, David Robertson, Seranthony Dominguez, Tommy Hunter, Pat Neshek, Edubray Ramos, Victor Arano … and that’s just the pitchers on the 60-day list. Six of their next 10 games are against the Mets, then they play the Braves, Red Sox, Braves again, Indians and Nationals — that final trio on a brutal 11-game road trip. I don’t see the Phillies surviving that. Milwaukee is three games over .500 despite being outscored by 39 runs. As Sam suggests, you can kind of throw out run differential at this point, but it feels like the Brewers are the least likely of the four to go on one of those 18-10 runs. The Mets? Well, right when you start believing in the Mets, they finish a big homestand by getting swept by the Braves and the Cubs. Plus, their schedule is reasonably tough down the stretch. So I guess that leaves the Cubs.

How about the American League, where wild-card hopefuls Cleveland and Tampa Bay square off? Who will make the play-in game: the Indians, the Rays, both or neither?

Matz: Jose Ramirez‘s broken hand could mean a broken heart for Tribe fans, as he was the resurgent straw that had been stirring Cleveland’s comeback cocktail. But Rays ace Charlie Morton, who has been Tampa Bay’s MVP this year but has never thrown more than 172 innings, sure looks like he’s hitting the wall (4.82 ERA since the break). So that might cancel out the Ramirez injury and then some. Oakland definitely gets one of the AL wild cards. As for the second spot, the Indians and Rays will square off in Game 163, with feel-good story Carlos Carrasco getting the win in relief, as Ramirez — fresh off the injured list — hits a walk-off bomb. And yes, Jordan Peele is already in talks to star as Ramirez in the movie version.

Miller: Hoo boy, a September where Tyler Glasnow, Blake Snell, Carrasco and Corey Kluber could all be coming back for the final weeks is a nice script. The A’s will win a spot thanks to a soft schedule, Cleveland gets one because of its 2½-game cushion over the Rays, and Tampa Bay ends up about where it was last year: better than half the NL playoff teams but born to be bullied in the AL East.

Schoenfield: Am I bad person if I point out that the Red Sox aren’t technically out of this? Will they spoil this small-market parade? I don’t think so, as they have a lot of ground to make up and FanGraphs gives them just 10% odds of winning a wild card, but 10% isn’t zero. Anyway, the Indians have the advantage of holding the top spot right now plus the added incentive of trying to chase down the Twins for the AL Central title. The Ramirez injury is a huge blow, but the return of Carrasco to the bullpen should provide a big emotional lift. They hold on. The A’s, meanwhile, have played very good baseball for four months now. I see them rolling through September. The Rays have a chance if Snell and Glasnow can actually come back and give a boost to a staff that has looked a little tired the past two weeks or so. I’m going Indians and A’s, but what I really want is a three-way tie.

Sure, teams are jockeying for playoff positions, but which individual player will you be watching most closely this weekend?

Matz: Jo Adell, Luis Robert, Gavin Lux and Kyle Tucker. I know, I cheated. That’s four players instead of one. But it remains to be seen which of these stud prospects will be getting called up when rosters expand Sunday. Tucker seems the most likely to get the call, although based on comments from Astros general manager Jeff Luhnow, the fifth overall pick in the 2015 draft — who has had a 30/30 season at Triple-A Fresno — might not arrive until Monday. Which, as we all know, is technically not the weekend. Nevertheless, I’ll be keeping a watchful eye on Tucker & Friends for the next 48 hours.

Miller: I read a piece at Baseball Prospectus on Thursday confirming what we’ve all intuited: Recent call-ups have had more immediate success than call-ups have ever had, another data point in the “It’s A Young Player’s World And Rajai Davis Is Just Living In It” argument. But I’m confident none of this September’s call-ups will match what Yordan Alvarez has been, and is still, doing. His OPS+ this year is the 66th-highest of all time, right there with peak Albert Pujols, peak Miguel Cabrera, peak Frank Robinson, even peak Mike Trout. The league isn’t successfully adapting to him at all: August has been his best month, with a .333/.431/.750 line. (July was his worst, with a .333/.419/.627 line!) On a per-plate-appearance basis, this is the greatest rookie hitting performance in history, and I’m going to soak it all up this weekend before Tucker or Lux comes and shiny-objects us all.

Schoenfield: The Indians plan to activate Carrasco on Sunday, when rosters expand. He’ll pitch out of the bullpen, but that’s not the important thing: After being diagnosed with chronic myeloid leukemia, he’ll be back in the majors and back with his teammates. I was in New York last week when the Indians played the Mets, and a couple of Cleveland players told me they believed their season turned around when Carrasco had to begin cancer treatment in June. The Indians were struggling at the time and Carrasco’s health problems helped them put things in perspective (granted, it also helped that Jose Ramirez started hitting like Jose Ramirez). Can’t wait to see Carrasco pitching again in a major league game.

Zeroing in on the big names in Mets-Phillies, who will have more total bases this weekend: New York’s Pete Alonso or Philadelphia’s Bryce Harper?

Miller: The Mets have the best ERA in baseball since the break, almost a run and a half better than the Phillies. Pete Alonso me.

We like to think we’re an equal-opportunity feature here at Weekend Watch, and it’s not always about the top 1%. The bottom-feeders deserve some attention, too (or do they?). Average attendance for the three Orioles-Royals games at Kansas City: over or under 14,500?

Matz: The Royals are averaging almost 19,000 fans per game. Since Memorial Day, they haven’t drawn fewer than 65,000 over any Friday-Saturday-Sunday set. And that includes when they hosted the Tigers. On the unofficial final weekend of summer, they’ll crush the 43,501 needed to make the “over” happen here.

Miller: “Unofficial final weekend of summer” might not apply in Kansas City, where public schools opened to students three weeks ago — what a world. But I’m with Eddie. Last year’s terrible Royals hosted last year’s terrible Orioles on this very same weekend last year and drew just over 16,000 per game. Kansas City might straddle two states, but neither one is Florida, and they should clear 14,500 per game.

Schoenfield: Looks like Eddie and Sam already did their homework. They’ll draw over 14,500 per game, and as a bonus the fans will get to see Jorge Soler break Mike Moustakas‘ club record for home runs (he’s one behind and will hit three).

Each week, we ask our panelists to choose one hitter they think will hit the most home runs and one pitcher they think will record the most strikeouts in the coming weekend. Panelists can pick a player only once for the season. We’ll keep a running tally — and invite you to play along at home.

Schoenfield: I can’t believe Sam picked Soler. I just wrote he was going to hit three and was going to pick him and now he’s off the board. Two True Outcomes is a tough game. I’ll go with Gleyber Torres.