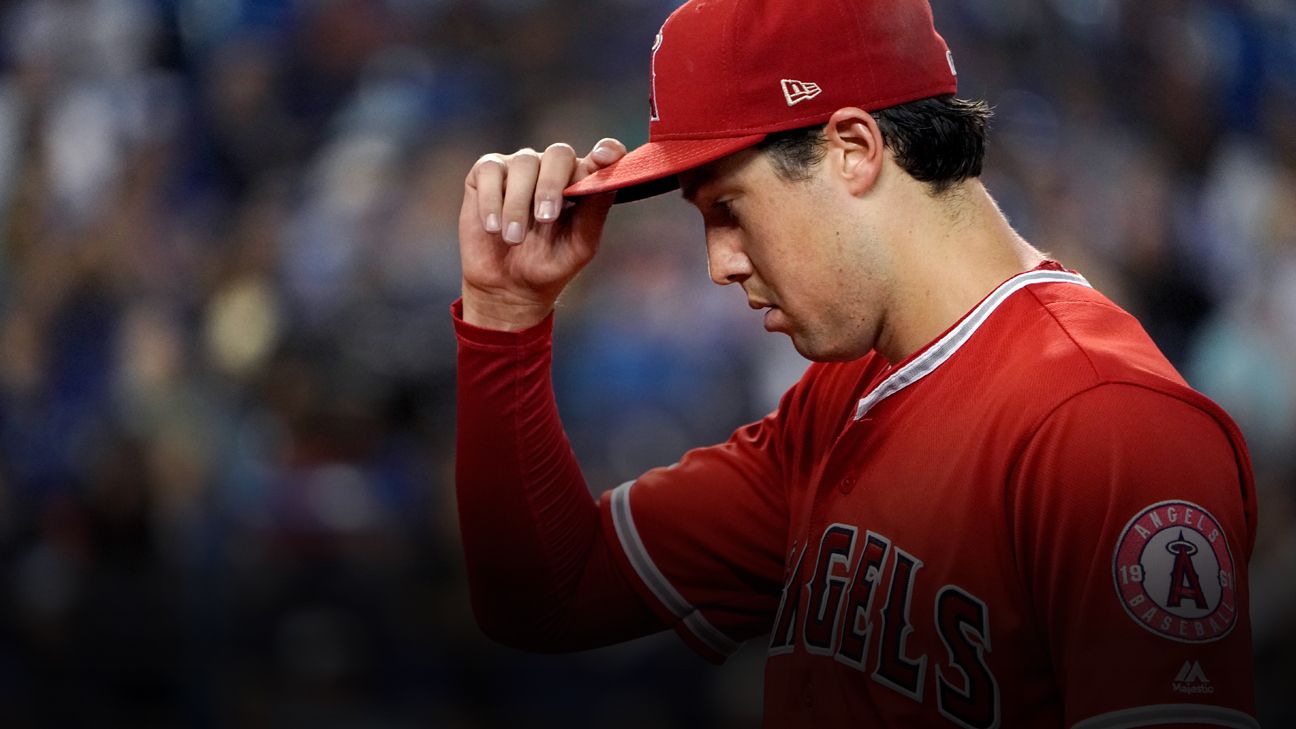 ANAHEIM, Calif. — The opioids fentanyl and oxycodone, along with alcohol, were in Tyler Skaggs‘ system at the time of his death, according to an autopsy report that was released Friday, nearly two months after the Los Angeles Angels pitcher was found unresponsive.

The Tarrant County (Texas) medical examiner’s office listed Skaggs’ cause of death as “mixed ethanol, fentanyl and oxycodone intoxication with terminal aspiration of gastric contents,” which essentially means Skaggs choked on his own vomit while under the influence. Skaggs, 27, died July 1 in his hotel room in Southlake, Texas. The autopsy revealed that his death was accidental.

As part of a two-paragraph statement released through legal counsel, Skaggs’ family revealed that an unnamed Angels employee was tied to an ongoing investigation by the Southlake Police Department. A spokesman for Major League Baseball said the league was unaware of the allegation and will launch its own investigation.

The Angels kept their clubhouse closed prior to facing the Boston Red Sox on the night the autopsy was released. Angels general manager Billy Eppler spoke from a podium in one of the organization’s conference rooms and would not comment on allegations tied to a team employee, citing an ongoing investigation.

“I can just say that we were saddened by that report and completely heartbroken,” Eppler said in an initial statement. “Everyone’s searching for facts, and everyone within the organization wants facts, which is why we are actively cooperating with an investigation.”

Skaggs’ family has retained the services of Rusty Hardin, a prominent Houston attorney best known for representing Roger Clemens during a perjury trial in 2012. Hardin could not be reached for comment by ESPN, but he told The Los Angeles Times that it was “way too early” to speculate on any potential legal action by Skaggs’ family.

The full statement from Skaggs’ family reads as follows:

“We are heartbroken to learn that the passing of our beloved Tyler was the result of a combination of dangerous drugs and alcohol. That is completely out of character for someone who worked so hard to become a Major League baseball player and had a very promising future in the game he loved so much.

“We are grateful for the work of the detectives in the Southlake Police Department and their ongoing investigation into the circumstances surrounding Tyler’s death. We were shocked to learn that it may involve an employee of the Los Angeles Angels. We will not rest until we learn the truth about how Tyler came into possession of these narcotics, including who supplied them. To that end, we have hired attorney Rusty Hardin to assist us.”

Angels manager Brad Ausmus said he was “surprised” by the findings and that he had “no prior notice.”

“But frankly, for me and for the guys in the clubhouse, it doesn’t really change anything,” Ausmus added. “We still lost a teammate, lost a friend, and we miss him.”

Fentanyl and oxycodone are prohibited substances under MLB’s Joint Drug Prevention and Treatment Program, but Skaggs wouldn’t have necessarily been subject to testing for the drugs found in his system. Players on 40-man rosters are tested for drugs of abuse only if the player-management joint treatment board finds reasonable cause, if a player has been found to have used or possessed a drug of abuse, or if a player is subjected to testing under a treatment program.

Asked about the prevalence of opioids, particularly within his own clubhouse, Ausmus said: “Quite frankly, I had to Google what fentanyl was. I don’t really know much about it. You read about opioids being an issue both culturally and of course post-surgically for athletes. But I can’t say I’ve ever seen it or noticed it being a problem. Not that I’m qualified to recognize the signs, but I would say no, I haven’t really seen it.”

Eppler said the club has been in communication with Skaggs’ family since his death and would not comment when asked whether the Angels employee connected to the investigation was still employed by the team. Asked if he was surprised by the connection, Eppler said: “We’ve had discussions with the investigators. We told them everything that we know, and we’ve been cooperating with them in every aspect.”

Skaggs, a product of Santa Monica, California, was a first-round pick by the Angels in 2009 who was traded to the Arizona Diamondbacks a year later and found his way back to the organization as part of a three-team trade in December 2013.

Skaggs cracked the Opening Day rotation in 2014, but he underwent Tommy John surgery the ensuing August, a procedure that kept him off a major league mound for nearly 24 months. Skaggs missed more than three months in 2017 with a right oblique muscle strain and was sidelined multiple times in 2018 with a left adductor strain. This year, he spent time on the 10-day injured list after rolling an ankle and also missed a spring training start as a result of forearm soreness.

For his career, Skaggs was 28-38 with a 4.41 ERA in 96 appearances, all starts. On the Angels, he was among the most beloved clubhouse personalities.

In the wake of his death, the Angels honored him with a patch on their uniforms and displayed his likeness throughout their stadium. Fans created a shrine of flowers, posters and memorabilia that still resides in front of the main entrance. Andrew Heaney threw a loopy curveball in his first start following Skaggs’ death to honor his best friend. Mike Trout and Tommy La Stella wore Skaggs’ No. 45 during the All-Star Game, and numerous players throughout the game honored him with inscriptions on their caps and cleats. In the Angels’ first home game after his death, with the entire team wearing Skaggs’ number, Taylor Cole and Felix Pena combined to no-hit the Seattle Mariners.