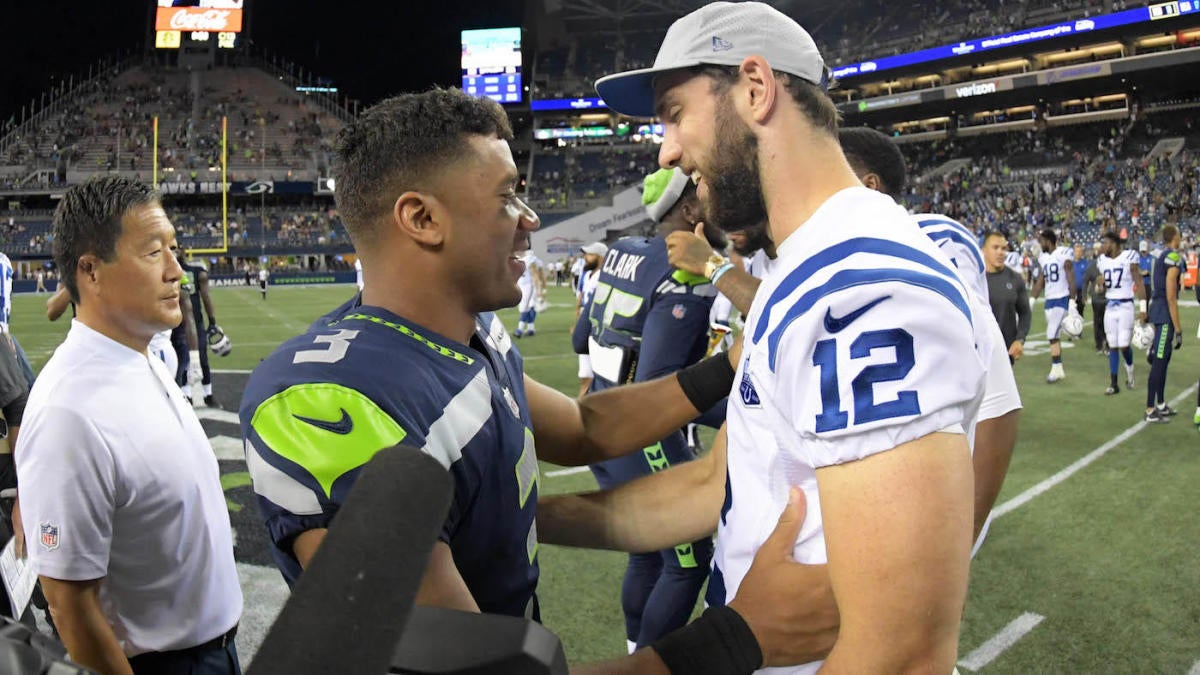 Rewriting history can be a tricky bit of business, but as Quentin Tarantino has repeatedly proved, it makes for a good bit fun. It’s an imperfect procedure, but the imperfections should be embraced, not maligned. Alternative history isn’t as real as, say, a doughnut, but it can be as satisfying as one.

With that in mind, it might be fun to rewrite the 2012 NFL Draft now that we know the fate of Andrew Luck, the No. 1 overall pick who shockingly retired on Saturday after only 86 career regular-season games.

On Tuesday, Will Brinson took an in-depth look at how history would’ve changed if the Indianapolis Colts had kept Peyton Manning instead of taking Luck at the top of the 2012 draft. Today, we’re going to take a look at how the top of the 2012 draft would’ve changed if the teams picking in the top 10 knew what we know today: that Luck would retire before the 2019 season, that Russell Wilson would emerge as one of the best quarterbacks in football, and so on. We’re going to redraft the top-10 picks of the 2012 NFL Draft by using all of the information available to us — the information teams didn’t have available to them seven years ago. The most notable bit of information being, of course, Luck’s early retirement.

A reminder that the top of the 2012 draft did not go well for the teams involved:

The rules are simple. For simplicity’s sake, we’re going to keep the draft order the same, including all of the trades that were made at the top of the draft. The order that the teams picked in originally in 2012 will remain the same in our redraft. In remaking the picks for the 10 teams at the top of the draft, we’re allowed to use all of the information we know today. Even though Luck’s fate likely would’ve changed if he hadn’t landed with the Colts — assuming his new team would’ve actually tried to protect him — we’re assuming in this draft that Luck will only play in 86 career games.

Again, this is an imperfect and an imprecise way of rewriting history. It’s more of a thought exercise. It’s also an answer to the following question: If, in 2012, teams knew what we knew today — if they knew how Luck’s career would turn out — how high would they draft him?

This will likely be the only uncontroversial selection. With the Seahawks, Wilson has become one of the league’s best quarterbacks, he’s been to two Super Bowls, he’s won one championship, and he’s still getting better.

Since entering the league as a third-round pick, he’s yet to miss a single start and with him as their starter, the Seahawks have missed the playoffs only once. Since 2012, he ranks eighth in passing yards, seventh in touchdown passes, second in wins, second in game-winning drives, second in fourth-quarter comebacks, and sixth in passer rating (minimum: 16 starts). This shouldn’t be interpreted as a slight against Luck, but Wilson pretty much fulfilled the destiny that Luck was supposed to fulfill coming out of Stanford as a generational quarterback prospect.

With the benefit of hindsight, the Colts probably would’ve still moved on from Manning, but instead of moving forward with Luck, they would’ve done so with Wilson.

It hasn’t been perfect, but with Trent Williams, Morgan Moses, and Brandon Scherff, the Redskins would have also provided Luck with a much stronger offensive line than he ever had — at least until the 2018 season — in Indianapolis.

Really, this goes to show two things: How valuable the quarterback position is and how great Luck was during his short career. A team like the Redskins — most teams, really — would’ve welcomed the chance to build a Super Bowl contender in 86 games with Luck. They would’ve gone all in during Luck’s rookie deal and then dumped him soon after. Luck would’ve given the Redskins a five-year Super Bowl window. Most teams don’t get five-season Super Bowl windows.

Cousins certainly isn’t the most beloved quarterback. He’s definitely flawed. As of right now, he’s probably overpaid. But he plays the most important position in sports and he’s pretty darn good at it.

Back in 2012, when the Browns drafted Brandon Weeden in the first round after starting Colt McCoy and Seneca Wallace during the 2011 season, the Browns would’ve leaped at the chance to get Cousins, who for all his faults has completed 67.8% of his passes, and has averaged 4,368.5 yards, 27.8 touchdowns, and 11.5 interceptions while accumulating a 98.1 passer rating since he became a full-time starter in 2015.

The thinking here is similar to the Redskins’ thinking with Luck. The Browns would’ve had five years of Cousins on his rookie deal and in those five seasons, they could’ve tried to follow the Rams model of building a Super Bowl-caliber roster around their cheap, but good quarterback. After five years, the Browns could’ve ditched Cousins, because a lot of his value is lost when his cap hit nears $30 million.

The only concern is that Cousins spent the first three seasons of his career split between the bench and the field before he performed like a good starting quarterback. During his first three years, he threw interceptions at an alarming rate — on 4.7% of his passes, to be exact. But it’s worth noting that Cousins only totaled nine starts during those three seasons, so there’s reason to believe if the Browns started him for 16 games in Year 1, he could’ve worked his way through his interception issues before Year 2.

Just to reiterate, nobody is saying Cousins is a better football player than the likes of Bobby Wagner, Luke Kuechly, Stephon Gilmore, Fletcher Cox, and the other players who filled out the top 10. But the quarterback position is so much more important than every other position that simply having a good, not great quarterback on his rookie deal outweighs the value of having a great linebacker, cornerback or defensive tackle. That’s the argument.

Vikings general manager Rick Spielman loves drafting cornerbacks, which made Stephon Gilmore a tempting pick, but Bobby Wagner is simply too good to pass up. In 2012, the Vikings’ starting middle linebacker was Jasper Brinkley. Wagner would’ve been a substantial upgrade. Wagner gets the nod over Luke Kuechly because he has posted a higher Approximate Value than Kuechly since they both entered the league, but you could flip this pick with the next one and nobody would really complain.

Yes, the Jaguars had Paul Posluszny in the prime of his career, but even at his best, Posluszny was nothing close to what Kuechly has been throughout his career with the Panthers. Furthermore, with the benefit of hindsight, the Jaguars would know that Posluszny was on the verge of a decline. Regardless, Kuechly at No. 5 is way too good of a value to pass up. He and Wagner have been the best two middle linebackers in football for a while now.

It was a tough call between Gilmore and Fletcher Cox — Cox has been better for longer — but since the Cowboys actually took a cornerback with the sixth-overall pick back in 2012, it makes sense to just give them a better cornerback here. Gilmore has developed into one of the best cornerbacks in football, if not the best. The Cowboys wanted a cornerback, so they get a cornerback here — one that’s far better than the one they actually took.

It’s not clear if in hindsight Cox would’ve dropped to No. 7, but if he did, there’s no way the Buccaneers would’ve passed on a defensive tackle who’s a menace against the run and a terror as an interior pass rusher. He’s not slowing down, too. He just racked up a career-high 10.5 sacks. By Approximate Value, Cox ranks fifth among all players from the 2012 draft class. The Buccaneers get an absolute steal here.

At the very least, DeCastro — who has been a key cog in the Steelers‘ consistently great offensive line — could’ve replaced John Jerry at right guard on the Dolphins’ offensive line. But the Dolphins also could’ve had DeCastro replace left guard Richie Incognito, a very good player who became the “ring leader” in the Jonathan Martin bullying scandal. If there was a way for the Dolphins to rewrite that portion of history, they probably would do it. Either way, DeCastro is one of the league’s best guards and the Dolphins would’ve been thrilled to get him here.

Kuechly is no longer available, but if the Panthers still want a linebacker, they can take a pretty darn good one in David, who isn’t on the same tier as Kuechly and Wagner, but is in the tier directly below them. With the Buccaneers, he’s averaged 91.6 solo tackles, 3.1 sacks, 2.6 forced fumbles, and 1.4 interceptions per season. By Approximate Value, he ranks eighth among his fellow members of the 2012 draft class.

A myriad of great players are still available at No. 10, from T.Y. Hilton to Harrison Smith, which makes this a difficult final pick in our top-10 redraft. But to put it another way, it’s impossible to make a bad pick here. So, let’s go with Jones, an edge rusher who has generated 77 sacks in his career. In that span, he ranks third in sacks behind only Von Miller and J.J. Watt, and tied with Ryan Kerrigan. By Approximate Value, he slots in at No. 9 among the 2012 draft class.

10 notable players still on the board