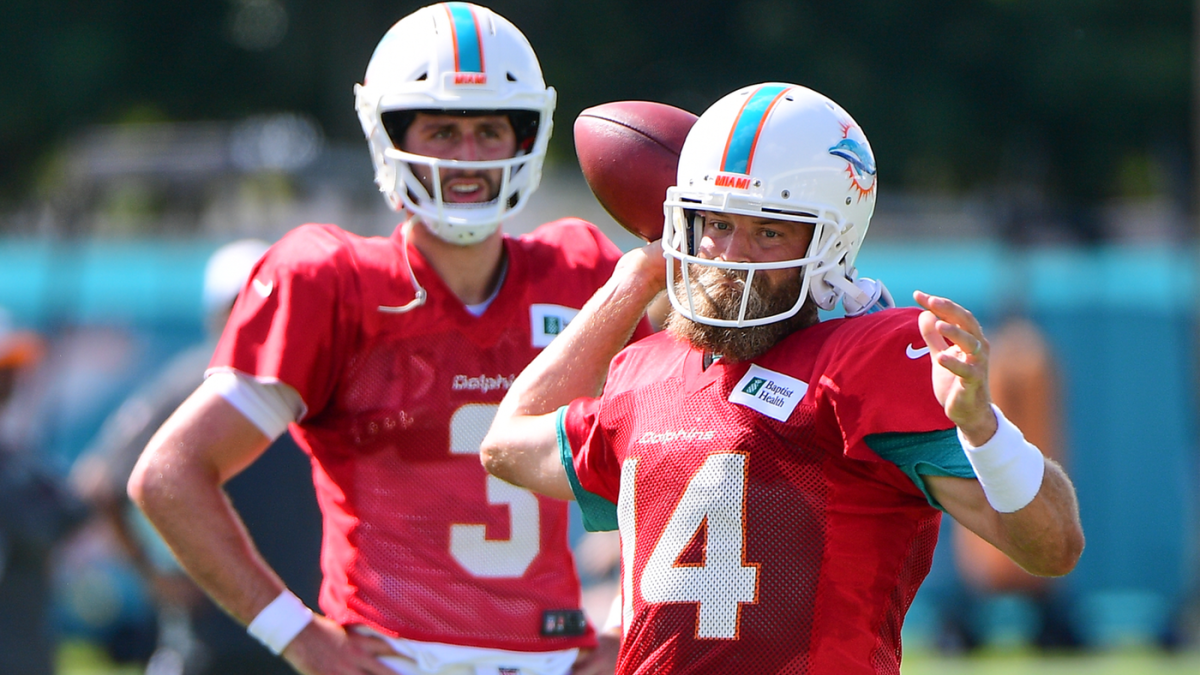 That remains the question Miami Dolphins head coach Brian Flores is trying to answer with Week 1 of the regular season on the horizon. On Tuesday, Flores said that the Dolphins have not decided on a starting quarterback for their season-opening game against the Baltimore Ravens, per Adam Beasley of the Miami Herald.

When it comes to Miami’s preseason finale Thursday against the New Orleans Saints, Flores said that there’s a chance that Fitzpatrick, who is currently ill and was doubtful for Tuesday afternoon’s practice, will sit. Rosen, who started Miami’s second preseason game against the Tampa Bay Buccaneers, will likely get his second preseason start Thursday night.

Fitzpatrick and Rosen alternated starts during the first three weeks of the preseason. Here’s a look at their statistical comparison entering Thursday night’s game:

Both quarterbacks put forth impressive drives during the second half of the team’s most recent preseason game, a 22-7 victory over the Jacksonville Jaguars. Fitzpatrick, who started the game, engineered an 85-yard scoring drive on the first possession of the second half that culminated with his eight-yard touchdown pass to Mark Walton.

Rosen, who replaced Fitzpatrick on the ensuing possession, orchestrated a 13-play, 99-yard drive that saw him complete all but one of his five pass attempts. He also scrambled twice for 25 yards while also connecting with Isaiah Ford for 39 yards to help set up Patrick Laird’s five-yard touchdown run.

Miami traded for Rosen on the second day of the 2019 draft, a day after the Cardinals replaced Rosen by selecting Kyler Murray with the first overall pick. Rosen, the 10th overall pick in the 2018 draft, completed 55.2 percent of his passes for 2,278 yards with 11 touchdowns and 14 interceptions during his one season with the Cardinals.

Rosen recently said that he is embracing Flores’ constructive criticism that has included critiquing Rosen’s fundamentals and in-game body language when things aren’t going his way.

“He’s my head coach. He was a really good defensive coordinator in New England,” Rosen said of Flores, via the South Florida Sun Sentinel. “And he knows a lot about football. Any advice he has is from the perspective of a defensive coordinator that won Super Bowls, that played against the best quarterbacks in football, and the best quarterback in football [Tom Brady in practice] on a day-to-day basis.

“Anything that he sees, I’m all ears and trying to help my game as best as I can.”

While the jury is still out on Rosen’s potential, the Dolphins know what they have in Fitzpatrick, a 15-year veteran with 126 career starts under his belt. While he has enjoyed several stretches of success (he was the NFL‘s leading passer two weeks into the 2018 regular season), Fitzpatrick’s lack of consistency is the main reason why he has never been considered a legitimate franchise quarterback that can lead a team to a championship. That being said, Fitzpatrick — who is 11th in career passing yards among active quarterbacks — is certainly a viable option for a team like the Dolphins, who are not expected to compete for a playoff spot this season.

Dolphins fans can rest assured that regardless who starts Miami’s season opener, Rosen will get the opportunity to play at some point during the regular season, as the Dolphins need to figure out their longterm plans for him heading into the 2020 NFL Draft. Miami faces four formidable opponents (Baltimore, New England, Dallas and the Los Angeles Chargers) before heading into their Week 5 bye, meaning that there’s a real possibility that Rosen is injected as the starter prior to Miami’s Week 6 home game against the Washington Redskins.