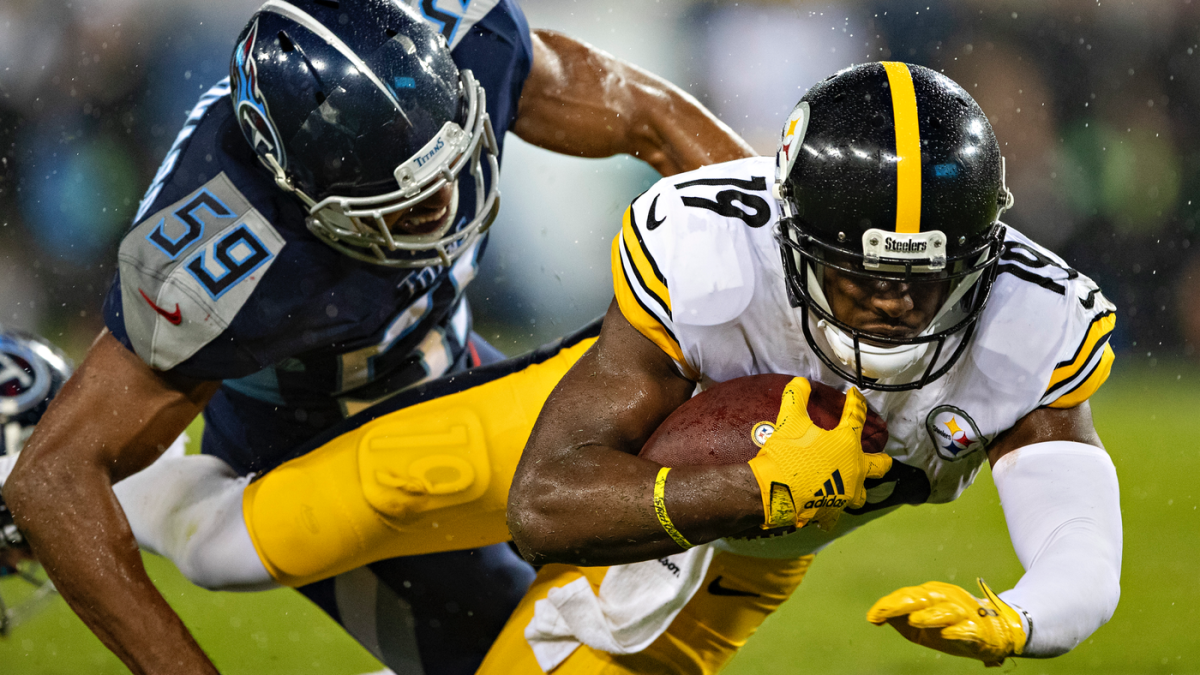 Antonio Brown provided rocket fuel to Pittsburgh’s offense. Rocket fuel, as Steelers legend Joe Greene described during a 2014 documentary for NFL Films, is “lightning-fast, quick.” Diesel fuel, however, is more “slow and methodical” albeit equally as effective. Pittsburgh’s offense this season, which featured its starters Sunday night for the first (and only) time this preseason, will be a blend of rocket and diesel fuel without Brown for the 2019 season.

For several years, Pittsburgh’s offense, blessed with the talents of Brown along with other game-changers in Le’Veon Bell, Martavis Bryant and Brown, could air it out at any time without always having to set up the run. While that often led to breathtaking plays and high-scoring games, it also could lead to interceptions and sloppy play that put Pittsburgh’s defense in some less than desirable spots. That style of play also never helped produce a championship team, something the Steelers are hoping to accomplish during Ben Roethlisberger’s final seasons under center.

On Sunday night, the Steelers’ starting offense displayed what they have been working on this offseason under second-year offensive coordinator Randy Fichtner. Pittsburgh’s new offense, as eloquently described by Chris Carter of DKPittsburghSports.com is best described as a “horizontal offense that picks at weak spots with safer passes and allows for a more efficient offense.” Specifically, Carter was referring to Pittsburgh’s first scoring drive, a nine-play, 58-yard drive on the Steelers’ third offensive possession.

After two punts (mostly due to dropped passes and mistimed throws from Roethlisberger), the Steelers’ starting offense put it together on their final drive of the preseason. James Conner got the drive going, with three touches for 21 yards on the drive’s first four plays that included a 5-yard run in a 3rd-and-1 situation.

Big Ben then went to his short, horizontal game, with Smith-Schuster catching two passes for 14 yards. After Conner and fellow running back Trey Edmunds (brother of 2018 first-round pick Terrell Edmunds), Roethlisberger decided to go for pay dirt, hitting Smith-Schuster in the back of the end zone for the duo’s first score of the season.

“I missed a couple of throws the first couple of series,” Roethlisberger, who completed 8-of-13 passes for 63 yards passing, said of his night. “That’s on me, gotta make [those] throws. But we got it going on the third series. They went to a zero on the [touchdown pass to Smith-Schuster] and just happened to call a good play and JuJu got his eyes around. I threw it early and trusted he was gonna be in the right spot. The line picked it up because they brought one more than we could block, but they kept him away.”

The throws Big Ben missed on Sunday night should be ironed out over the next few weeks, as the Steelers begin to turn their attention to their Week 1 matchup with New England. And even though the first two drives failed to produce points, Pittsburgh revealed a few new plays that will definitely be part of the offense throughout the 2019 season.

And while the passing game will look different this season, the same can be said for Conner and Pittsburgh’s rushing attack. While Bell was a special talent, Conner, who improved his conditioning again this offseason after undergoing a major regiment change in 2018, looks like he is going to take the next step as one of the NFL’s top offensive weapons in 2019. Already one of the NFL’s best running backs between the tackles, Conner showed more of an outside burst Sunday night. He also made a devastating cutback on Titans‘ cornerback Adoree’ Jackson.

While he no longer has Brown at his disposal, Big Ben still has a plethora of other options to turn to in Conner and Smith-Schuster as well as in veterans Donte Moncrief, Ryan Switzer, and Eli Rogers. And while Diontae Johnson looks to make an impact as a rookie, James Washington, who has been a star during the preseason, seems poised to make up for his disappointing rookie season.

The Steelers also appear to have a revised offensive game plan, a game plan that is tailored to what Pittsburgh’s current offense, post-Brown, do best when attacking a defense. The Steelers’ new offense may not be as explosive but, based on the potential it showed Sunday night, could be just as effective as the old one.

“The good thing is we can throw different looks [at a defense],” Roethlisberger said. “We can do two tight ends, we can do five wide. We didn’t get too exotic, we just kinda kept it pretty basis. Wanted to get into a flow, wanted to communicate on the road. I thought we did a pretty good job.”