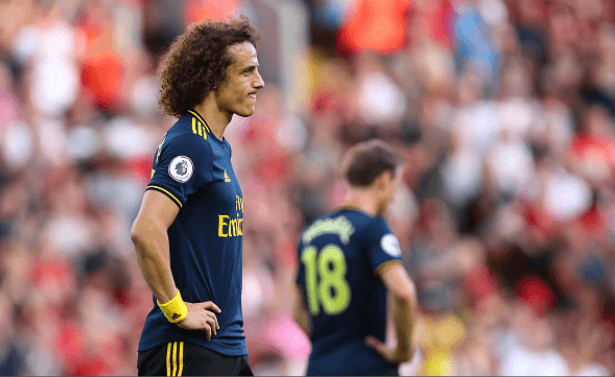 Arsenal suffered a 3-1 defeat at Liverpool on Saturday evening. In truth, it was not a shameful result by any means for the Gunners, who threatened the home goal on a number of occasions. Most teams suffer big defeats at Anfield nowadays. It was no big deal.

However, I ask the title question for the fact that Arsenal have kept one clean sheet in their three league games so far this season.

Many associated with the Gunners seem to believe that they enjoyed a great summer in the transfer market.

The club-record signing of Nicolas Pepe from Lille is an exciting one, while full-back Kieran Tierney arriving from Celtic also seemed to be a good move. The Scotland international is currently sidelined due to injury.

However, the one signing that seemed to be heralded by many people was that of maverick Brazilian centre-back David Luiz from Chelsea. I couldn’t understand why people were so pleased to have signed the Brazilian.

Luiz has good technical ability and he is a decent footballer. However, although his defensive abilities have improved slightly with age, he is still not a great defender. He never will be either.

Saturday’s game at Anfield summed-up Luiz for me. Granted he was up against very good attacking players, but he looked awful. He gave a penalty away and hardly the rock-solid defensive figure the Gunners needed.

My biggest issue with Luiz is that he always seems to have a mistake in him. He will overplay or simply be out of position. These kinds of mistakes can cost his team. He usually performs best in a three-man defence, so there are two players to rectify his mistakes.

Arsenal could have signed a better centre-back

Arsenal’s reported summer budget of £45million was obviously a myth. Therefore, why did the club from north London not pay a bit more money to sign a quality centre-back? Maybe the coffers were empty after the signing of Pepe.

Luiz came relativity cheap very late into the summer transfer window. The Gunners had yet to strengthen in the heart of defence despite the exit of former club captain Laurent Koscielny.

Maybe his signing was out of desperation. It could well turn out for the Gunners. His CV is an impressive one, but you have to ask yourself, why where Chelsea looking to sell Luiz? The player wanted to go. However, that was reportedly only after new Blues boss Frank Lampard had told him that he would fourth choice in the central defensive pecking order.

I may be wrong, but I do not think the signing of Luiz will help the Gunners return to their former glories.

Arsenal made a decent start to the season

Only Liverpool have won all three of their Premier League games this season. Arsenal have made a decent start to their campaign and are currently third-place in the English top-flight table.

The return to fitness of Tierney in the near future could be a key factor in an improvement in Arsenals defensive displays. Whether Unai Emery’s sides defence is any better only time will tell. However, if it is, then the signs suggest that it is not by miles.

Are Arsenal really any better in defence this season?