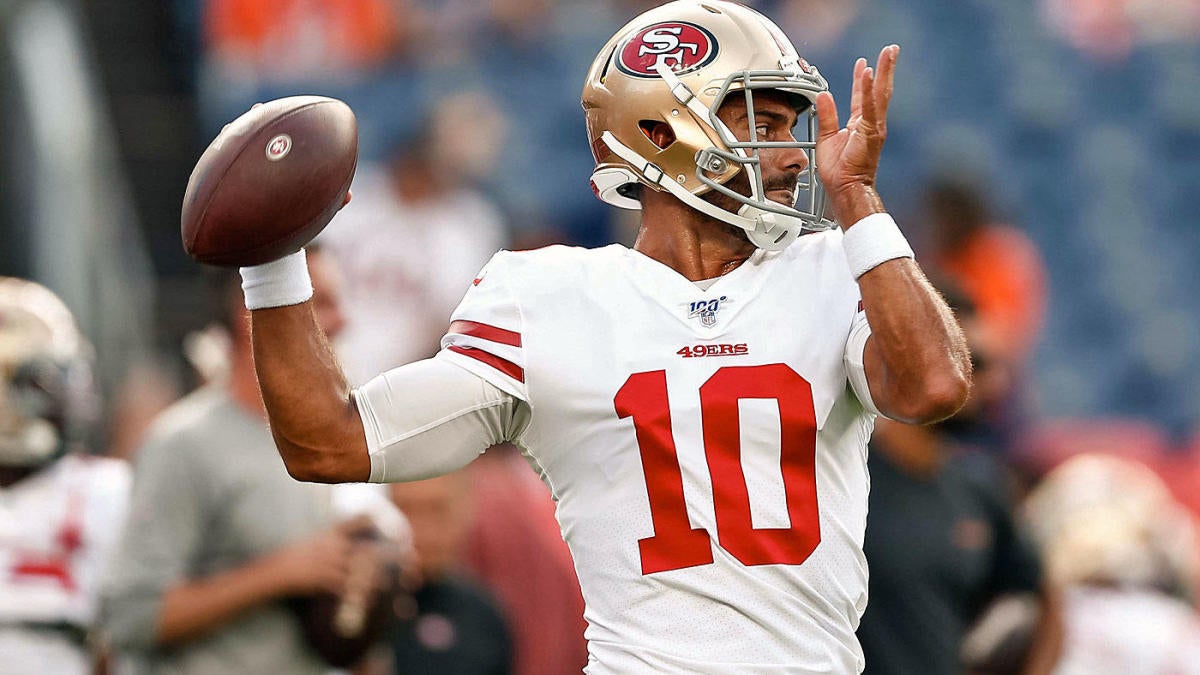 The past few seasons have been trying times for a prestigious franchise like the San Francisco 49ers, failing to win more than eight games in five consecutive seasons and missing the playoffs in each of those years. San Francisco has compiled a record of 17-47 over the past four years, the worst stretch for the franchise since the late 1970s, prior to Hall of Fame coach Bill Walsh making the franchise a winner and the team of the 1980s.

Despite the 49ers’ recent struggles, there is a reason for optimism. The 49ers believe they have their franchise quarterback in Jimmy Garoppolo, 11 months removed from a torn ACL that prematurely ended his 2018 season. Garoppolo will need time to get his knee back to full strength, but the 49ers have done a good job at building a competent roster around him that should keep them competitive. Head coach Kyle Shanahan enters his third year with arguably the most competitive team he’s had, but a poor season could bring his job in question.

The 49ers should make progress this year, with Garropolo leading the way.

Jimmy Garoppolo plays all 16 games for the 49ers

Garoppolo has been a starting quarterback in the NFL since being traded to the 49ers midway through the 2017 season and only had one opportunity to play a full season since. That chance was cut short after three games in 2018 as the 49ers franchise quarterback tore his ACL in the third game of the season. If there was any silver lining for Garoppolo, the injury happened in September of 2018, which the 49ers quarterback will be nearly a full year removed from surgery when the 49ers take the field on September 8.

Garoppolo will be hindered with his mobility to start the season, as the quarterback will be getting comfortable with his knee and his mobility inside the pocket. He’ll get stronger as the season goes along, which will help the 49ers’ ability to win more games.

Don’t expect a setback on Garoppolo’s knee or any other injuries because Garoppolo is attempting to compensate for his repaired ACL. He’ll play 16 games, the biggest win the 49ers can get this season with their franchise quarterback.

Garoppolo’s health will be the key to the 49ers success, as they have a talented roster around him that can win some games in the NFC West. San Francisco has a brutal stretch to start the season — they host the Pittsburgh Steelers and Cleveland Browns in two of their first four games. If the 49ers can get out of the first half 4-4, they have an excellent shot at competing for a .500 record.

A slow start will hurt the 49ers and their chances for that, even if they improve over the course of the season. Playing the NFC South and AFC North this year doesn’t help, nor does a December with the Baltimore Ravens, New Orleans Saints, Atlanta Falcons, Los Angeles Rams and Seattle Seahawks on the schedule.

The 49ers will be a better team with a strong offense and much-improved defense, but seven wins with this schedule is a good season. That would be their most wins since 2014 when they finished 8-8. A few upsets could make this team 9-7 and a competing for a playoff spot.

The 49ers have some promise at wide receiver, but their leading wideout only had 42 catches for 487 yards (Kendrick Bourne). There’s certainly an opportunity for Hurd to be the team’s No. 1 wideout with this young core, whose top two receivers in yards (Bourne and Dante Pettis) from last season are just 24 yards old.

Hurd, a third-round rookie from Baylor, has been impressive in camp. The 49ers have him lining up in the slot and on the outside at the “Z,” is a very physical player when he gets the ball (used to play running back) and a red-zone presence. Hurd will compete with rookie Deebo Samuel for the most receiving yards on the 49ers, but he’ll get the opportunities amongst this young core.

What Kittle did in 2018 was beyond impressive for the second-year tight end, finishing with 88 catches for 1,377 yards and five touchdowns (15.6 yards per catch) in all 16 games for the 49ers. The 1,377 yards receiving was the most yards by a tight end in a season, a year which Kittle caught passes from the likes of Nick Mullins and C.J. Beathard for 13 games. All Kittle did in that stretch was have four 100-yard games, three of which came when Mullins was the quarterback.

Even though the 49ers are much improved at wide receiver and Kittle has been slowed in training camp with a calf injury, he’s still the go-to option in the offense. With Garoppolo has his quarterback for a full season, Kittle will be targeted early and often as the 49ers quarterback gets his groove back in the offense.

Kittle can amass 1,377 yards as he continues to improve at his craft. He’s just 25 years old heading into the year.

Buckner was the breakout star on defense for the 49ers in 2018, as the team’s first-round pick in 2016 led the team with 12 sacks at the defensive tackle position. While Aaron Donald and Fletcher Cox received all the accolades, Buckner finished with 67 tackles (17 for loss), 20 quarterback hits, 53 pressures, and 37 stops.

Buckner is one of the most underrated players in the NFL, not making the Pro Bowl for his dominant 2018 season. With Nick Bosa on the edge to help take the double teams away, Buckner finishes with 15 sacks and having his best season ever.

The 49ers pass rush will be significantly better than the unit that finished tied for 22nd in the NFL with 37 sacks last year, with Buckner leading the way.