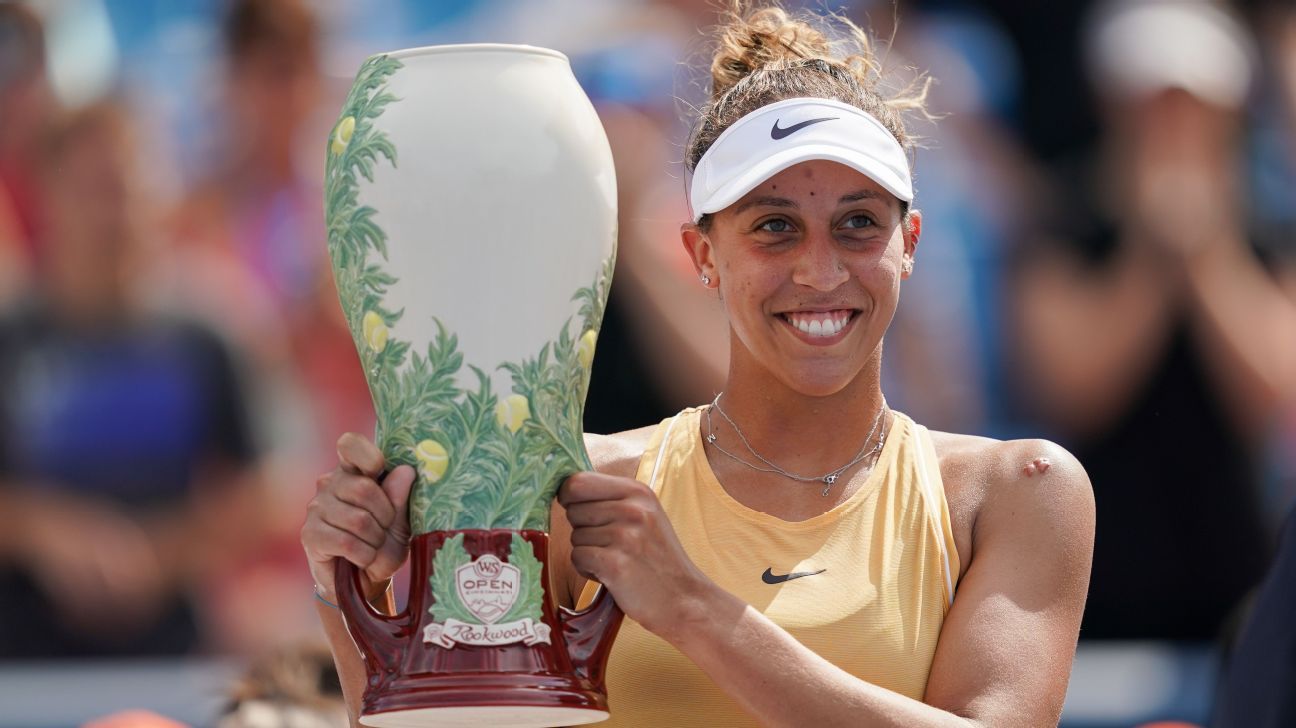 Currently ranked No. 10 in the world, Madison Keys is a 24-year-old American tennis star and a five-time winner on the WTA Tour — including a title earlier this month at the Cincinnati Open. The 2017 US Open runner-up has been checking in with ESPN.com throughout the summer to talk about her season and life on tour. She filled us in while in New York getting ready for the US Open.

It feels pretty great coming to New York for the last Grand Slam of the year with a win under my belt. I was so happy, and relieved, to take home the trophy in Cincinnati last week. I had some tough opponents along the way, including Simona Halep and Venus Williams, and I didn’t play perfectly, but I still managed to figure it out as I went on the court. I can’t tell you how important that is for my confidence level.

I would love to say there was one match in particular where I felt like I really hit my stride, but I somehow feel like it was all of them, and none of them, at the same time. I had such high-quality competition every single round, so I never was able to go out there and play completely free. Instead, every match was so high pressure against someone who was more than capable of beating me. So I learned something from each match and each opponent, and I’m certainly taking all of that with me as I start play in Queens.

Aside from gaining a new trophy for my collection, the win also put me back into the top 10. I used to care a lot about my ranking, but I found myself focusing too much on it, so now it really is just a number for me. By not putting so much emphasis on it, I’m able to stay focused and be more in the present.

While my ranking might not be all that important to me, I do make sure to take a moment to celebrate my accomplishments — even if just briefly. As I mentioned last time, I love Graeter’s ice cream, so I celebrated after the match with some cookie dough, and then a victory dinner with my team. But as things go in tennis, it was on to New York the very next morning, so I didn’t get to revel in the win for too long. It’s just like, “All right, on to the next!”

But I’m so excited to be back in New York and here for the last Grand Slam of the year. I love the crowd and the energy here. The few days before the start of the tournament are always a whirlwind. There’s so much to do in terms of sponsorship activities and various events.

In fact, you might have seen a picture of me from the Nike “Queens of the Court” event I participated in with Sloane Stephens and Naomi Osaka earlier this week. Sloane posted it on social media, and everyone almost immediately started commenting that Naomi and I look like cardboard cutouts. But I swear it’s really us! I don’t know why we look like that — maybe it’s the lighting — but we’re real, I promise. We’ve all gotten a good laugh out of it though.

It’s always a lot of fun when I get to do promotional events with my friends and peers. It’s obviously way better than standing around and doing it alone. It’s great getting an excuse to hang out. There were moments where the people running it had to say, “OK guys, you have to stop talking now and do some work!”

There was also an event for my “FearlesslyGirl” foundation on Tuesday. It was held at the Julien Farel salon in Midtown, and there were about 15 girls there. We aim to inspire confidence and empower girls, while encouraging them to be kind to one another, and I think our event helped do just that. Having such a small group makes it so I can actually spend time with everyone there, and I like it that way. I think it’s a better and more memorable experience for everybody.

But with my first match on Monday against Misaki Doi, my time having fun in New York is basically over. My focus is now almost exclusively on practices and matches — and ordering Uber Eats to my hotel room for the rest of the tournament. I won’t really do much else until it’s over.

I am hoping to keep up what I was doing in Cincinnati over the next two weeks — stay super calm, manage my emotions well and just take everything one day at a time and not look any further forward. If I can keep focusing on what’s right in front of me — and be present for that day and that day only — I think I will do OK.