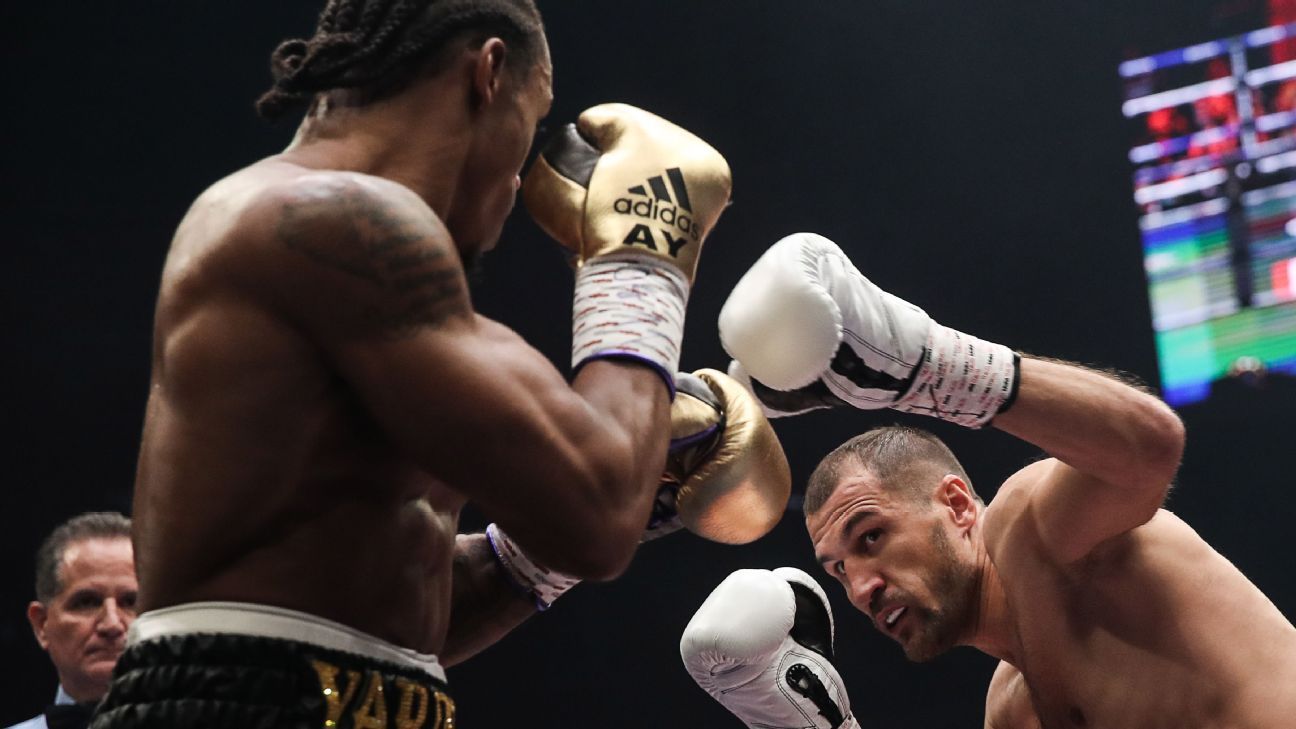 Is Canelo Alvarez next for light heavyweight world titlist Sergey Kovalev? He just might be.

Kovalev retained his 175-pound belt for the first time in a homecoming fight by knocking out Anthony Yarde with one shot in the 11th round on Saturday on ESPN+ at the Traktor Sport Palace in Chelyabinsk, Russia.

The Los Angeles-based Kovalev was fighting in his hometown for the first time in his 10-year professional career and scored a resounding victory in front of a sellout crowd of 7,500 to set up the likely prospect of a fight with middleweight world champion Alvarez, boxing’s biggest star, on Nov. 2.

Alvarez plans to fight on that date and has not yet locked in an opponent because he and promoter Golden Boy wanted to wait to see if Kovalev defeated Yarde and came out of the fight with no injuries.

The Kovalev and Alvarez teams had previously seriously discussed the fight for Sept. 14, but the deal for Kovalev to face mandatory challenger Yarde had already been agreed to and they ran out of time to make the fight at that time.

But now, with Kovalev having disposed of his mandatory obligation and Alvarez wanting a high-profile opponent, their teams will soon resume talks in an effort to close the fight, which would present Kovalev with by far his biggest payday. Alvarez, who would move up two weight divisions, would have the chance to win a world title in a fourth weight division after having already claimed belts at junior middleweight, middleweight and super middleweight.

Although Kovalev won the fight and did so in somewhat dominant fashion, Yarde pushed him hard at times and had his moments, but he had never faced an opponent remotely on Kovalev’s level and simply did not have the experience or conditioning for such a rough fight.

Yarde’s speed advantage was clear from the start of the fight, but Kovalev got his jab going in the second round and that punch was the big difference.

Even when Kovalev landed some nice combinations in the fourth round, trainer Buddy McGirt, in his second fight with Kovalev, begged him in the corner after the round to keep firing the jab no matter what.

Kovalev (34-3-1, 29 KOs), 36, did just that, using his jab to snap Yarde’s head back repeatedly in the fifth round. By the end of the fifth, Yarde looked dead tired with his mouth hanging open. Yarde’s mouthpiece dropped out in the sixth round as his fatigue was even more obvious.

Yarde landed a few hard shots in the seventh round that got Kovalev’s attention, and he also seemed to get his wind back in the eighth round. Yarde had never gone past seven rounds in any previous fight.

Yarde (18-1, 17 KOs), 28, of England, landed several powerful right hands that rocked Kovalev in the eighth round and had him in trouble. After the round, McGirt told Kovalev he would stop the fight if Kovalev took too many more clean punches.

Kovalev, boxing in his 16th consecutive world title bout, bounced back well in the ninth round, staying at a distance and once again snapping Yarde’s head back with his jab.

Kovalev had a huge 10th round as he rocked an exhausted Yarde several times with right hands. He seemingly was on the verge of stopping Yarde in the final seconds of the round but the bell rang and he survived — but not for long.

In the 11th round, Yarde’s legs appeared weak and wobbly and when Kovalev nailed him with a clean and stiff left jab on the chin Yarde fell flat on his back and was counted out by referee Luis Pabon at 2 minutes, 4 seconds.