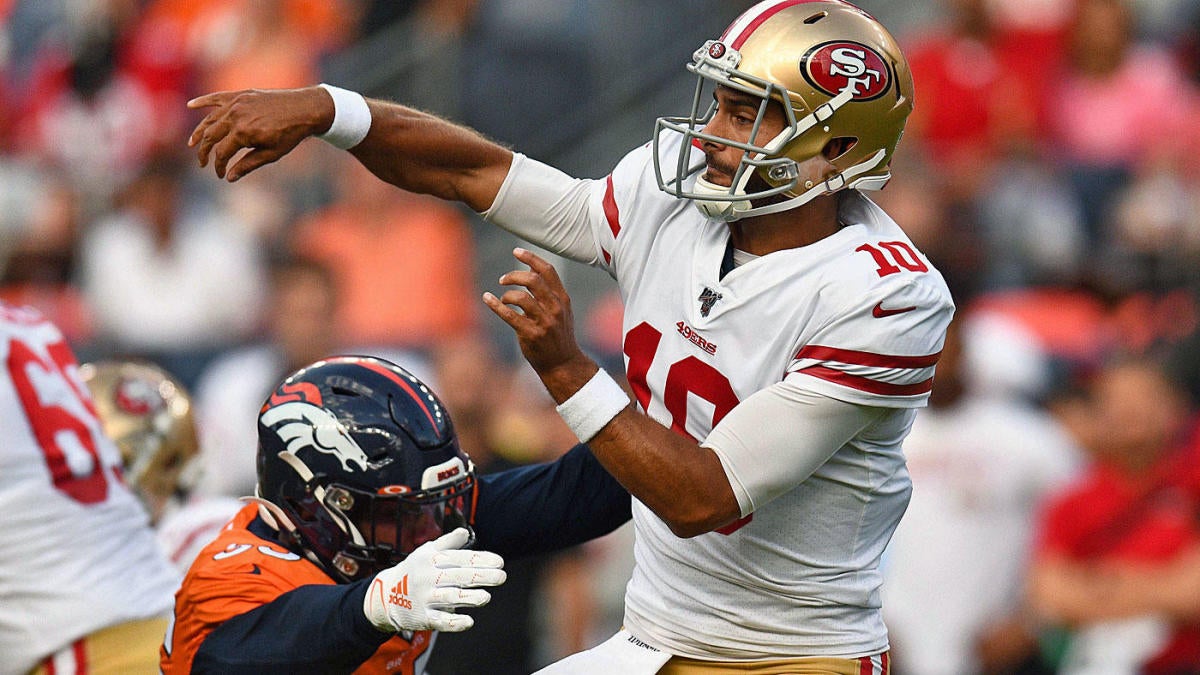 Jimmy Garoppolo is still trying to find his footing 11 months removed from a torn ACL that ended his 2018 season. Garoppolo has struggled for the San Francisco 49ers in the preseason, going 1-for-6 with an interception in his first game action Monday night against the Denver Broncos. Garoppolo appeared hindered by his mobility, which takes longer than 11 months to get back to full strength, and rusty regarding his pocket presence. This comes off the heels of Garoppolo throwing five interceptions during a training camp practice last week.

49ers head coach Kyle Shanahan had to put out the fire regarding Garoppolo being ready to play Week 1. Shanahan didn’t seem too concerned over Garoppolo’s struggles in his first game back.

“I don’t ever sense it from Jimmy. Jimmy comes in and he’s the same guy every day,” Shanahan said regarding Garoppolo’s confidence. “He’s great in the meetings, he works, he listens. That doesn’t change much. I know anytime that you get all that publicity for things that you’re not happy with, that’s going to affect a lot of people. You’ve got to go out there and play and you get your confidence back by playing. There’s not a magical motivational speech or anything. Jimmy’s got the ability to do it.

“We know he will do it. What stinks is when you go out there and you just get a few opportunities and it doesn’t go right and you’re not in a position to play yourself out of it. Hopefully he’ll get to be in there longer versus Kansas City. I hope it’s all good things, but most likely there will be some good, some bad and then we’ll see how long he can stay in and grow from it.”

The 49ers can look to the Philadelphia Eagles if Garoppolo’s mobility appears to be a problem. Eagles quarterback Carson Wentz struggled moving outside the pocket and moving side-to-side nine months after returning from his torn ACL and LCL in September of 2018. The adjustment to staying in the pocket ultimately affected Wentz early in the season as he suffered a spinal compression fracture in his back that knocked him out of the season by December. Wentz’s mobility did improve as the season went on (despite the back injury) as he completed 69.6 percent of his passes for 3,074 yards, 21 touchdowns and seven interceptions in 11 games.

Garoppolo is two months ahead of Wentz in his recovery from his knee surgery and has two preseason games to get ready for the year. Wentz returned in Week 3 with limited training camp practices, unlike Garoppolo.