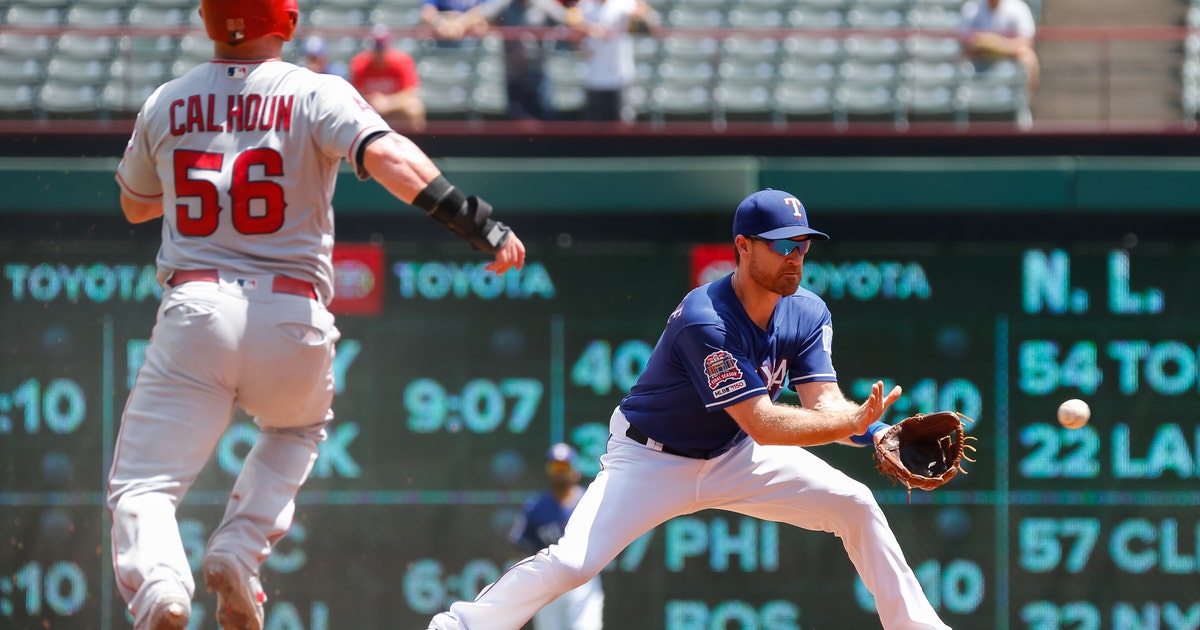 ARLINGTON, Texas (AP) — Mike Trout matched the MLB lead with his career-best 42nd homer, Andrew Heaney had a career-high 14 strikeouts without a walk over eight innings and the Los Angeles Angels beat the Texas Rangers 5-1 in the first game of a day-night doubleheader Tuesday.

Trout lined a two-run shot into the left field seats immediately after David Fletcher led off the game with a single off Joe Palumbo (0-2). It was Trout’s 10th homer this year against the Rangers, matching the most ever by an opponent against them in the same season.

The doubleheader opener was the makeup of the July 1 game that was postponed after pitcher Tyler Skaggs was found dead in his hotel room the last time the Angels played in Texas. The coroner hasn’t released a cause of death for Skaggs, who was 27.

Heaney (3-3), who was one of the Skaggs’ best friends, allowed consecutive one-out singles in the first inning. The lefty then retired 16 batters in a row until Willie Calhoun‘s two-out homer in the sixth, one of only four hits he allowed.

On a sunny day when the temperature reached 100 degrees during the game, Heaney threw 79 of his 108 pitches for strikes.

Luis Rengifo also hit a two-run homer , a two-run shot in the fifth that made it 5-0.

Trout just missed two more homers. He pulled a towering flyball that went just left of the foul pole — there was a crew chief review by the umpires just to make sure — and he tripled high off the 14-foot wall in left in the ninth.

Palumbo was added from Triple-A Nashville as the 26th player for the doubleheader. The lefty lasted only 1 2/3 innings, leaving because of a blister on his left thumb after a 1-2 pitch to Trout in the second inning. Palumbo struck out two and walked two while allowing three runs.

Angels: RHP Jaime Barria (4-6) was scheduled to start the opener, but the Angels wanted to give him a little more rest after having a fever Monday night. Heaney moved up to pitch the day game, and Barria was set for the nightcap.

Rangers: RF Nomar Mazara was put on the 10-day injured list with a left oblique strain suffered Monday. Infielder Nick Solak was called up and made his MLB debut as the DH; he had a single in the seventh.

The Rangers play the nightcap of their third doubleheader since early June, while the Angels wrap up their first twinbill since September 2015. Lefty Brock Burke is set to make his MLB debut for the Rangers, and he will be the third consecutive Texas starter under age 25 — the first time that has happened for the Rangers since July 2008.