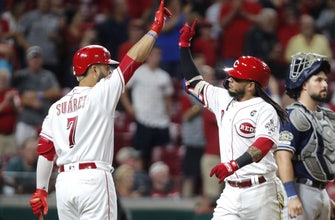 Bell’s appreciation for Galvis grew Tuesday when the second baseman hit a tie-breaking two-run homer in the sixth inning, and Aristides Aquino added an RBI single as Cincinnati beat the San Diego Padres 3-2.

“Freddie Galvis just likes to play,” Bell said. “He shows you that in a number of ways. He is a guy that always wants the ball hit to him. He always wants to be the one at the plate in important situations.”

Galvis, claimed off waivers from Toronto on August 12, followed Josh VanMeter‘s second hit of the game with an opposite-field drive to left off Cal Quantrill. It was his second home run in two nights and career-high 21st of the season.

“It’s tough when your team gives you a chance to win,” Quantrill said. “(Manager) Andy Green trusted me to go out for the sixth, and I didn’t do the job. Different ballparks play differently. If you don’t like it, make a better pitch.”

Aquino went 1 for 4 and his streak of consecutive plate appearances without a home run increased to 13, the longest of his brief career.

Sonny Gray struck out 10 batters in six innings, reaching double figures for the third time this season and seventh in his career. He won his third consecutive start and improved to 4-0 in his last five outings. Gray (9-6) gave up four hits and three walks.

“My fastball had a lot of life early on,” said Gray, 6-1 in his last nine starts overall and 7-0 in his last seven home starts. “I have to do a better job doing that longer. In the last inning, I started pulling my fastball a little bit, trying to make the perfect pitch. That’s why I had those two walks in that inning.”

“Sonny Gray was good tonight,” Green said. “His slider, his curve and his command in to lefties which is something you don’t see too much.”

Robert Stephenson pitched a perfect seventh inning. Amir Garrett, in his first appearance after serving an eight-game suspension for precipitating a brawl with Pittsburgh on July 30, walked the two batters he faced on nine pitches and was charged with an unearned run on Jose Iglesias‘s throwing error before Michael Lorenzen prevented further damage.

Raisel Iglesias pitched the ninth for his 24th save.

Naylor tied it with his seventh homer, a two-out shot to center in the sixth. The Padres loaded the bases in the inning, but Manuel Margot lined out to center fielder Nick Senzel, ending the threat.

Gray and Trevor Bauer, who had 11 strikeouts on Monday, are the first Reds pitchers to reach double figures in strikeouts in back-to-back games since Gary Nolan and Jim Maloney in September 1968.

Quantrill’s start was his first in an NL Central ballpark. Gray’s was his first against San Diego, giving him at least one start against all 30 major league teams.

San Diego’s team batting average with the bases loaded slipped to .205, lowest in the National League and ahead of only Tampa Bay and Detroit. The Padres’ 16 bases-loaded hits lead only the Tigers.

Padres: RHP Jacob Nix (elbow strain) allowed three hits and one walk with six strikeouts over five scoreless innings in the first start of his rehab assignment with Triple-A El Paso on Monday.

Reds: 2B Jose Iglesias was shaken up when he was smacked in the face by SS Jose Iglesias while they were chasing a pop in short center field. Both players went down and several divots were kicked up, but Galvis stayed in the game after being looked at by a trainer.

Padres: No starter for Wednesday’s series finale was announced.