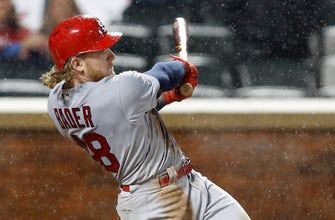 ST. LOUIS – Outfielder Harrison Bader, who appears to have rediscovered his swing in the minors, is back in the majors.

Bader, 25, was optioned to Memphis on July 29. He batted .317 with seven home runs and 15 RBIs in 16 games with the Redbirds, including hits in his last nine games and homers in three of his last four.

Bader was batting .195 with six homers and 19 RBIs in 90 games with the Cardinals before his demotion. His seven outfield assists remains the team high.

Arozarena, 24, had two hits in eight at-bats in his week with the Cardinals. He is batting a combined .349 with 10 homers and 42 RBIs in 80 games with Memphis and Double-A Springfield this season.