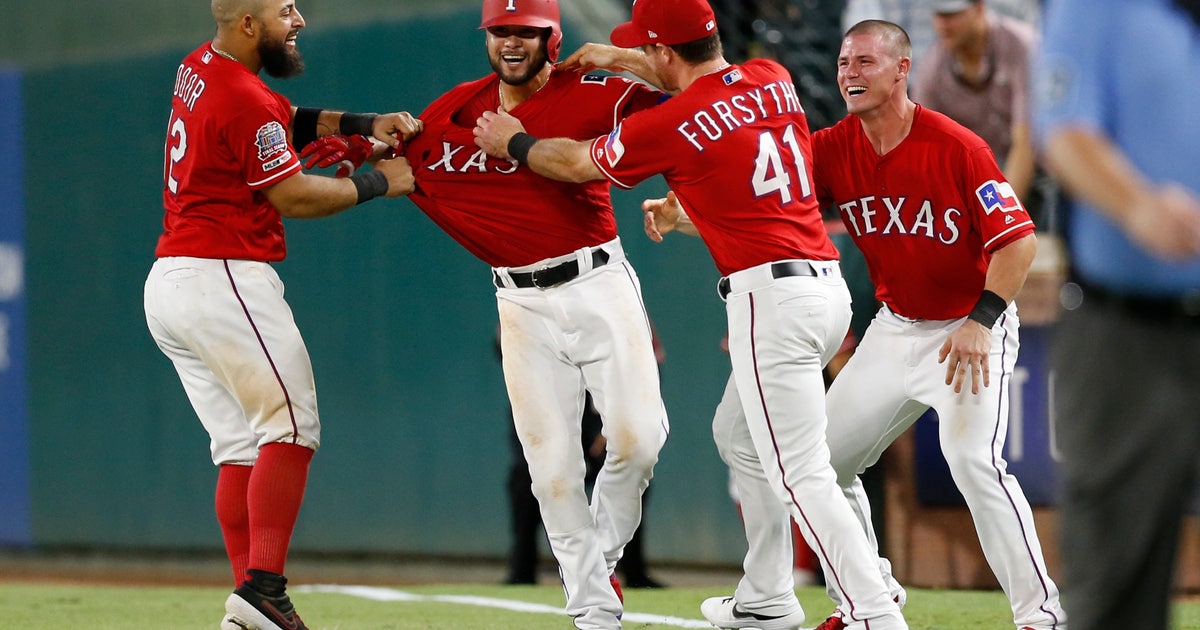 ARLINGTON, Texas (AP) – The Los Angeles Angels let a six-run lead get away and lost 8-7 in 11 innings Monday night in their first time back in Texas since pitcher Tyler Skaggs was found dead in his hotel room before the start of a series against the Rangers last month.

Shohei Ohtani extended the longest hitting streak of his career to 10 games with an RBI triple , then had a broken bat line drive that turned into an inning-ending double play with the bases loaded in the 10th. The Japanese star reached base four times and scored twice.

Hunter Pence, who had three hits and reached base five times, pulled Texas within a run with a single in the eighth. Rougned Odor followed with a tying RBI single.

Mike Trout walked to load the bases in the 10th when Ohtani hit a smash to the left of Odor, who was playing in. The second baseman made the catch on his knees and flipped to first, barely beating Trout’s head-first slide.

There were signs of healing for the Angels seven weeks after Skaggs’ death stunned them and forced the postponement of the opener of a four-game set. The remaining three games were played, the first on an eerily quiet night with no music or on-field promotions.

The makeup game is part of a doubleheader Tuesday as the teams are set to play four games in three days, and after a series opener that lasted 4 hours, 35 minutes. The coroner hasn’t released a cause of death for Skaggs, who was 27.

As left-hander Andrew Heaney struggled to describe his emotions about his best friend while standing next to the No. 45 jersey hanging from the locker still reserved for Skaggs, a joyous shout arose from a pregame clubhouse competition near him.

“It’s like a new kind of normal, but it’s just a different …,” Heaney said before the game, his words trailing off. “Like I already have a hard enough time understanding my own emotions about it. Honestly I can’t really give like you a good answer as to … I’m sorry.”

Manager Brad Ausmus said memories of Skaggs are everywhere: home and road. He recalled recently watching a video that plays before every game in Anaheim, and thinking of Skaggs precisely reciting some of the words during the last homestand before he died.

“It’s a lot easier than last time we were here for sure,” Ausmus said. “There’s always things that pop up during the course of a day, whether it’s one or two times a day that remind you.”

Right fielder Kole Calhoun robbed Elvis Andrus of what probably have been an RBI triple in the fourth with a running, over-the-shoulder catch on the warning track.

Assuming both teams don’t get into AL wild-card contention, this is the last trip to the Dallas area for the Angels this season. And next year, the Rangers will play in a new ballpark across the street from the one with all the difficult memories for LA.

“It’s funny like for a place I came when I was a kid, this is where I came, this is the team that I kind of like rooted for,” said Heaney, a native of Oklahoma. “Then that happens. It like completely erases all the good memories that I have here. Glad there will be a new place.”

Rangers: RF Nomar Mazara left after two innings with left oblique tightness. Mazara made a lunging catch while falling forward on a liner from Pujols in the second. … 3B Danny Santana left after four innings with left hamstring tightness. Santana slowed considerably between first and second on a double in the fourth. … RHP Adrian Sampson went on the 10-day injured list with lower back spasms. The move was part of a roster shuffle that included bringing up Heineman and RHP Phillips Valdez from Triple-A Nashville. RHP David Carpenter was designated for assignment.

Heaney (2-3, 4.76 ERA) is set to start what amounts to the makeup game for the postponement following Skaggs’ death. It’s the first doubleheader in almost four years for the Angels. Brock Burke, a 23-year-old lefty, is set to make his major league debut for Texas in the opener. Joe Palumbo (0-1, 11.00) is expected to be recalled from Triple-A Nashville to start the second game for the Rangers. The 24-year-old rookie left-hander has three career appearances and two starts for Texas. RHP Jaime Barria (4-6, 6.62) is set to start the nightcap for the Angels.