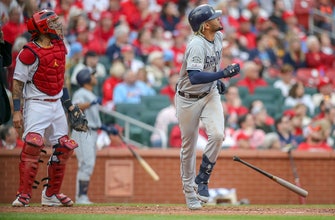 PHILADELPHIA (AP) — San Diego Padres shortstop Fernando Tatis Jr. was placed on the 10-day injured list on Friday with a back injury that “most likely” will end his season, according to manager Andy Green.

The 20-year-old Tatis, a rookie-of-the-year candidate, is batting .317 with 13 doubles, 22 homers and 53 RBIs in 84 games. Green said the injury was the result of “common usage” and that it would require rest to heal.

“It’s disappointing, obviously,” Green said. “We’re going to do what we can to take care of him, and we expect him to be a huge part of what we’re doing going forward. It’s been really tough for him the last couple of days to swallow. It’s a tough blow.”

Green said Tatis will be reevaluated in three weeks.

The Padres also placed second baseman Ian Kinsler on the 10-day IL on Friday with a neck injury that also will end his season. Green said Kinsler has a herniated disc and was weighing whether to have surgery.

France, who was batting .399 at Triple-A, will assume the everyday second baseman duties. Luis Urias will shift over to shortstop from second to fill in for Tatis.