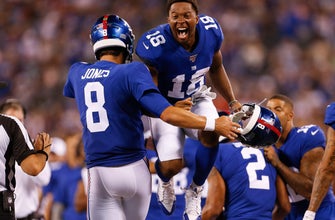 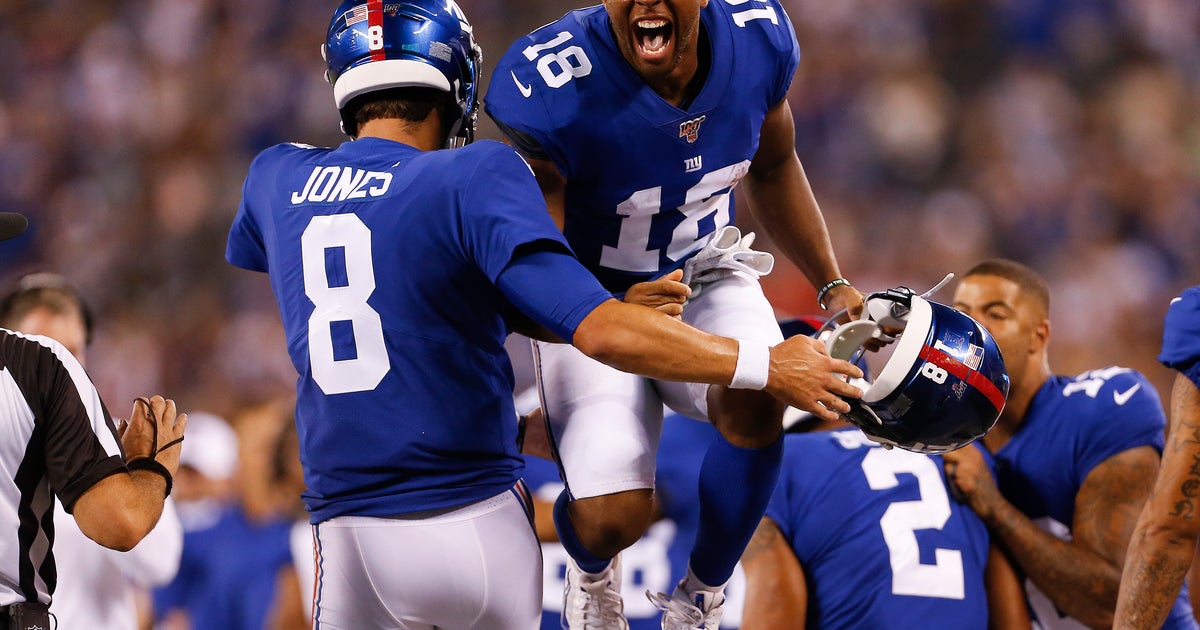 EAST RUTHERFORD, N.J. (AP) — Eli Manning pulled out a page from the Daniel Jones‘ playbook. He was perfect in a game in which the heir apparent faced adversity for the first time.

The 38-year-old, two-time Super Bowl MVP threw a touchdown pass in a flawless series and the New York Giants had their way with the Chicago Bears‘ backups in a 32-13 preseason victory on Friday night.

Jones also threw a touchdown pass, but the sixth pick overall in the draft finally looked like a rookie, losing two fumbles.

Manning’s performance came days after co-owner John Mara said a perfect season would be Jones not taking a snap, which would mean Manning and the Giants were doing well.

“John owns the team,” coach Pat Shurmur. “We are on the same page. Well you heard it from the owner and I think I have been saying that all along.”

Rookie Kerrith Whyte Jr., who had a 103-yard kickoff return in the second quarter nullified by a late holding penalty, scored on a 1-yard run. Eddy Pineiro kicked field goals of 41 and 27 yards for the undermanned Bears.

“As a staff, we’re trying to evaluate where our backups are,” Nagy said. “We had to make sure we handled things the right way. My biggest thing is to do what’s best for the Chicago Bears. I feel good about our starters already. I’m not going to worry about that. This gives us a chance to check out our depth.”

Much like the preseason opener against the Jets, the focus for Giants fans was on Jones, the sixth pick overall in the draft and a young man many think will lead the team back to respectability.

Jones looked good throwing the ball, hitting 11 of 14 for 161 yards, including a 15-yard touchdown to TJ Jones. The kid from Duke also showed some flaws, turning over the ball twice on fumbles. He failed to handle a snap at the Bears 19 and coughed up the ball when sacked by James Vaughters.

“That’s the way the game goes sometimes,” Daniel Jones said. “You have to try to bounce back and try to score some points.”

Manning was very solid, leading the Giants on a 10-play, 79-yard drive that was capped with an 8-yard toss to Bennie Fowler III. He was 4 of 4 for 42 yards.

“It helps to win, but it helps just to play well,” said Manning, who had a three and out series in his only work against the Jets. “To move the ball … a lot of receivers are making plays down the field on go-routes and getting open. It makes the competition good in practice. It makes guys hungry to want to get in and make plays. You see the competitiveness. I think that’s good for the team.”

Shurmur also liked what he saw.

Shurmur held out running back Saquon Barkley and tight end Evan Engram for the second straight week. Neither is hurt.

Bears All-Pro cornerback Kyle Fuller did not make the trip. He had a fight in practice this week and was left home.

“We’re going to handle that internally,” Nagy said. “I don’t want to get into how we handled it or Kyle handled it.”

Bears: OL Rashaad Coward left in the third quarter with an elbow injury.

Giants: CB Antonio Hamilton left in the second quarter with a groin injury.

Bears: on the road again to face the Indianapolis Colts in their next-to-last preseason game on Aug. 24.

Giants: at Cincinnati on Thursday night.