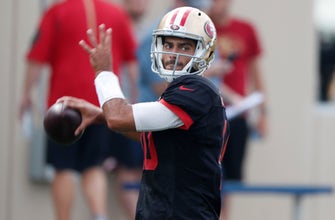 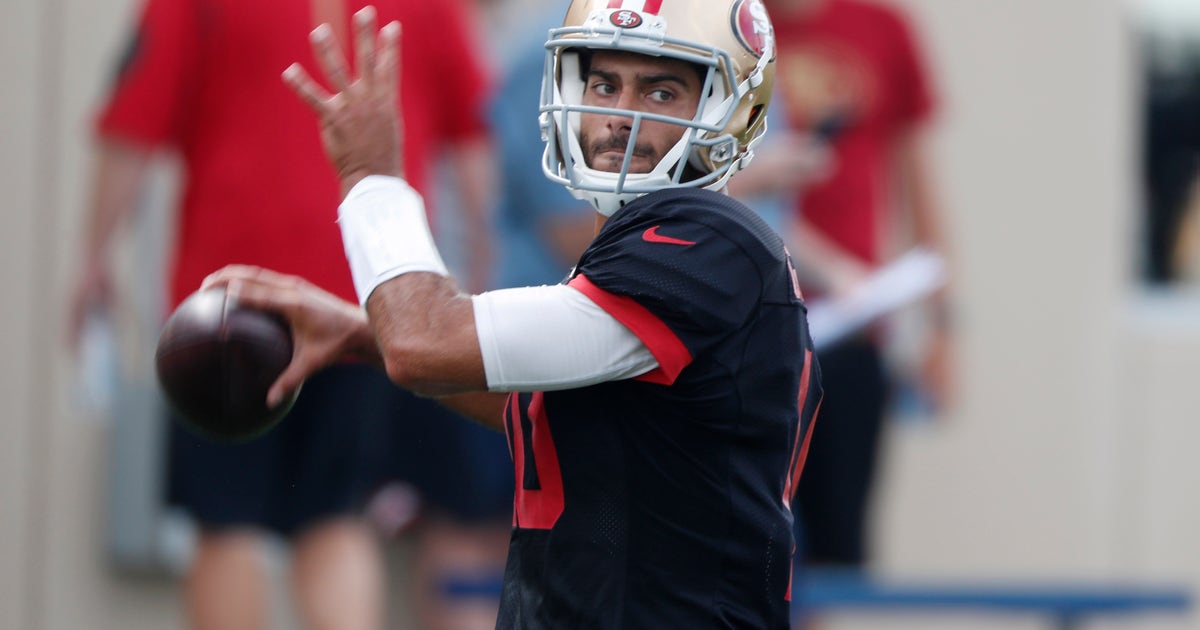 ENGLEWOOD, Colo. (AP) — Jimmy Garoppolo relished lining up against another team Friday, and not just because his own defense intercepted five consecutive passes off him at their last practice.

“I love these crossover practices that we have. It’s a change-up to training camp,” Garoppolo said after the San Francisco 49ers‘ joint workout with the Denver Broncos that attracted Peyton Manning and several other former players.

Garoppolo hadn’t faced an opponent since his season-ending left knee injury at Kansas City last September, and while coaches Vic Fangio and Kyle Shanahan had agreed to forbid tackling during their two days of joint workouts, the competition represented another milestone in the quarterback’s comeback.

He’s expected to take another big step by playing at least a series in the teams’ preseason game Monday night.

Niners cornerback Richard Sherman said he’s also a fan of these joint workouts, so long as everyone keeps their composure.

“If it’s clean like it was today, two teams just completing and getting after it and perfecting their craft against guys who are different and not all the fights and excess, then it’s fine,” Sherman said.

That’s not always the case across the NFL .

“A lot of these joint practices, there’s fights all over the place, there’s extra intensity, there’s guys going to the ground, there’s guys getting hurt,” Sherman said. “And that’s the stuff you don’t want.”

Especially when your quarterback is coming off an ACL injury.

“Anytime you have a D-line getting close to the quarterback and they don’t have a vested interest in the quarterback’s health, you know, they’re not as concerned about falling away from him or not touching him, etc., etc.,” Sherman said. “So, those are things you’ve got to be careful about.”

Garoppolo was much safer with the football Friday, when his only interception came when he was pressured by Von Miller and hung a 20-yard pass that safety Justin Simmons snared.

That was nothing like Wednesday, when he threw interceptions on five straight pass attempts , by far his worst session since returning from the torn ACL that cut short his 2018 season after three games.

“You guys are seeing me a couple of days removed, but that day I was pretty ticked off,” Garoppolo said. “The defense got the best of me that day. We’ve had battles back and forth. And it’s good for us, good for them, and it’s only going to lead to a better football team.”

The 49ers are hopeful Garoppolo’s poor performance that day showed that maybe they will have a more opportunistic defense this season after setting NFL records for futility with just two interceptions and seven takeaways all last season.

“I think it was less about Jimmy and him having a bad day and more about us executing and guys getting on the same page and us making better breaks,” said Sherman, who had one of the five interceptions.

San Francisco defensive coordinator Robert Saleh said that although Garoppolo “got a lot of flak, not all of them were his fault, believe it or not. But I’m pumped up any time we get the ball. … Shoot, Jimmy went all camp with what, two interceptions? So, I think it’s OK, personally, to excuse him for one bad day.”

As if often the case in joint practices, the defenses had the upper hand Friday.

Although the 49ers were missing pass rushers Dee Ford (knee) and Nick Bosa (ankle), they stymied the Broncos offense, which wasn’t surprising given their familiarity with Denver offensive coordinator and Shanahan protege Rich Scangarello , who was the 49ers’ QB coach the last two seasons.

“It’s a good day because I think we’ve got a young team and it’s good to come out against a new team,” Broncos quarterback Joe Flacco said. “I think they brought a lot of energy. So, I think it was good for our team to go up against that. I think we can definitely do a better job than we did today.

“But that’s what this is all about; it’s about getting good work against some high intensity guys and some different looks.”

Facing the Broncos was just like going up against their own offense any other day, said 49ers linebacker Kwon Alexander.

“They use Coach Shanahan’s offense, so we kind of know much of the stuff, the ins and outs,” Alexander said. “Just new guys to hit.”