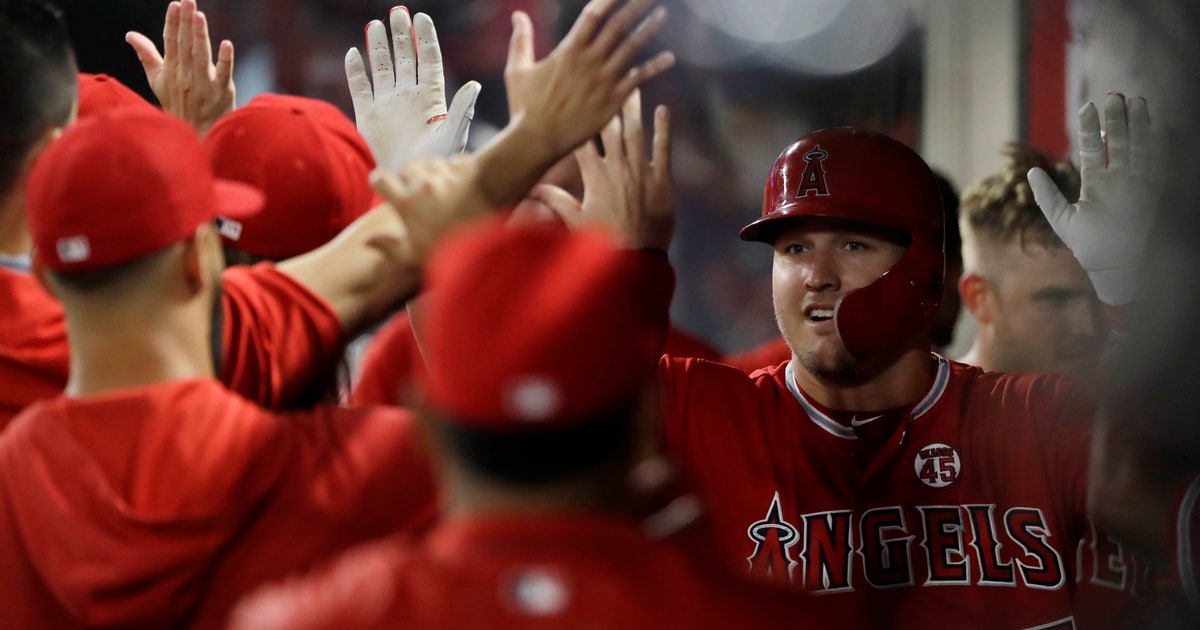 ANAHEIM, Calif. (AP) — A low changeup scraping the outside corner is not a home run pitch for most hitters.

Mike Trout is not most hitters, and he blasted it off the fake rock pile beyond center field at the Big A for the latest milestone homer in what’s shaping up to be his best power season yet.

“I like that,” Trout said with a grin. “I like it down. I think everybody knows that.”

Trout turned a good, low pitch from Reynaldo Lopez (7-10) into a homer in the third inning, and he kept pace with the Dodgers’ Cody Bellinger for the overall major league homers lead.

He also reached another franchise milestone: The two-time AL MVP became the fastest player to 40 homers in Angels history and the fifth-fastest in the majors in this century by reaching the mark in 123 games — 13 fewer than Troy Glaus needed for the Halos in 2000.

“It’s pretty cool, pretty special,” Trout said. “I’ve just got to keep it going, finish strong and see where it all goes.”

Trout is checking the homer race occasionally to see how Bellinger, Christian Yelich and Pete Alonso are slugging.

“I’m pulling for all them guys,” Trout said. “It’s going to be fun down the stretch. I’m not trying to hit homers, though. I’m just barreling up the ball, and they’re going out.”

Trout wasn’t the only player putting on a power show in Anaheim. José Abreu hit two homers for Chicago, and Justin Upton had a three-run shot for the Angels.

But Trout reached base five times, emphatically snapping an 0-for-11 mini-slump with four consecutive hits before drawing a four-pitch walk in the eighth.

Trout’s career high is 41 homers, and the Angels’ single-season franchise record is 47 by Glaus in 2000. Both are easily reachable for the majors’ leader in on-base percentage and the AL leader in slugging percentage and OPS.

“I thought the home run was impressive because he was fooled on it,” Angels manager Brad Ausmus said. “He was out in front, and he still managed to hit it over the wall. Yeah, he’s pretty good.”

The Angels took an 8-3 lead into the ninth, but nearly blew it by allowing five hits. James McCann had an RBI triple off Trevor Cahill before Welington Castillo hit a two-run homer off Hansel Robles.

Robles gave up another one-out single, but struck out Ryan Goins with a runner on second to earn his 17th save in the opener of a four-game weekend series between two big-city AL clubs sitting well outside the playoff race in mid-August.

“The guys didn’t quit,” Chicago manager Rick Renteria said. “Had the potential tying run on second base in the ninth. After being down the way we were, I tip my hat to my guys for continuing to fight.”

Upton drove in four runs and David Fletcher hit a tiebreaking two-run single as the Angels earned their fourth win in six games.

Heaney (2-3) yielded three runs in his first victory since June, striking out six and walking none in his second start back from a shoulder injury. He retired the first 10 White Sox, followed by eight more in a row.

Upton connected for his eighth homer immediately after second baseman Yolmer Sanchez bobbled Shohei Ohtani’s grounder, which would have ended the sixth inning.

Lopez yielded nine hits and five runs while pitching into the sixth inning of his first loss in four starts.

Abreu tied and passed Robin Ventura, his former manager, with his 170th homer for the Sox, a two-run shot in the fourth. Abreu then passed Ventura for sole possession of sixth place in team history with a solo shot leading off the seventh, his 26th of the season.

“It’s a huge honor for me to be with those names in the list,” Abreu said through a translator. “Passing Robin, I had the chance to play for him, so knowing that is even more special.”

White Sox: Leury Garcia returned to the starting lineup after missing four games with a bruised finger. He started at third base for the first time this season and the 15th time in his career. … Yoan Moncada will play a rehab game with Triple-A Charlotte on Friday. He’s out with a strained right hamstring.

Angels: RHP Keynan Middleton will continue his rehab assignment with Triple-A Salt Lake on Friday. The reliever is almost back from Tommy John surgery.