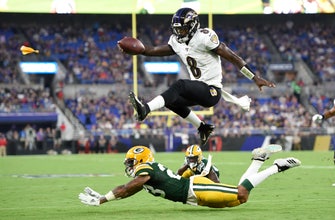 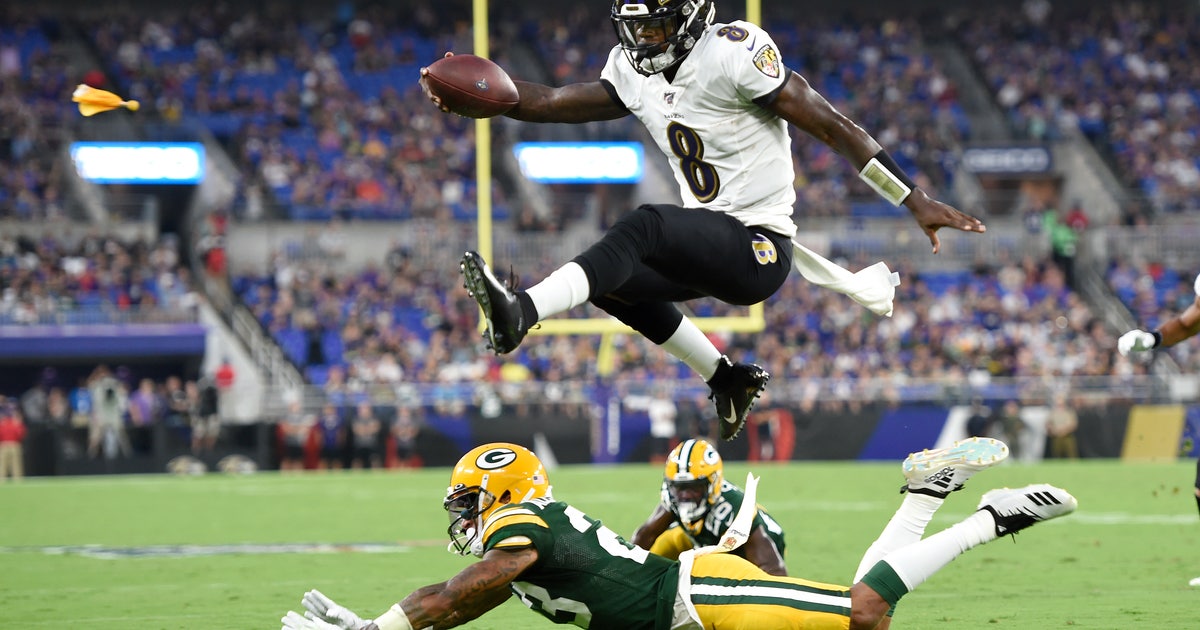 BALTIMORE (AP) — Lamar Jackson directed two scoring drives during a limited appearance, had an impressive touchdown run erased by a penalty and sparked the Baltimore Ravens to a 26-13 victory over the Green Bay Packers, who played Thursday night without quarterback Aaron Rodgers.

Rodgers developed back stiffness and was a late scratch , a move the team labeled as a “precaution.” After being held out of Green Bay’s first preseason game against Houston, the seven-time Pro Bowl star was slated to start for the first time under rookie head coach Matt LaFleur.

Instead, DeShone Kizer, Tim Boyle and Manny Wilkins struggled against a defense that last year was ranked No. 1 in the NFL.

Coming off a rookie season in which he didn’t start until mid-November, Jackson is seeking to master a new playbook devised by first-year coordinator Greg Roman. Jackson started and played three series last week in a 29-0 rout of Jacksonville. This time, the 2016 Heisman Trophy winner stuck around for two possessions, both of which ended with field goals. He completed 6 of 10 passes for 58 yards and ran twice for 14 yards.

After sitting out the first two exhibition games, Ryan played most of the first half. He completed 10 of 14 passes for 118 yards, a performance that was even more impressive considering Brian Hill and Justin Hardy dropped back-to-back passes in the back of the end zone that should have been touchdowns, sparking boos from the meager crowd.

The Jets are certainly pleased with Darnold, who followed up a marvelous drive in the preseason opener by completing 5 of 7 passes for 46 yards. He guided New York on a 66-yard touchdown drive to start the game, capped by Ty Montgomery’s 1-yard scoring run.

Le’Veon Bell sat out again for the Jets. He could make his New York debut next week.

JACKSONVILLE, Fla. (AP) — Philadelphia third-string quarterback Cody Kessler was knocked out of the team’s win on the opening drive. Defensive end Datone Jones came unblocked off the edge and walloped Kessler in the back.

Kessler was escorted to the sideline, evaluated for a head injury in the locker room and then placed in the concussion protocol. The team already was without backup Nate Sudfeld, who broke his left wrist in the team’s preseason opener against Tennessee. Starter Carson Wentz rested for the second straight game. He watched from the sideline in uniform, but without pads and a helmet.

Rookie Clayton Thorson, the only other QB on the roster, played three-plus quarters and completed a 38-yard touchdown pass to former college quarterback and Alliance of American Football receiver Greg Ward on fourth down in the second quarter.

Thorson beat the blitz by lofting a deep ball toward the left sideline. Ward was a couple of steps behind safety C.J. Reavis, made an acrobatic catch and then outran two defenders to the end zone. It was another big play in the past three weeks for the 5-foot-11 wideout who threw for 8,704 yards and accounted for 91 touchdowns in four years at Houston.

Haskins threw a 55-yard TD pass to camp standout Robert Davis and was 7 of 14 for 114 yards with a fumble. The 15th overall pick took two sacks but showed poise under pressure and was more effective than veteran Case Keenum, who played the first three drives and was 3 of 7 for 52 yards.

Keenum, Haskins and longtime backup Colt McCoy are competing to be the Redskins‘ Week 1 starter. McCoy has yet to play in the preseason while he deals with lingering pain from a broken leg last year.

After already passing Jeff Driskell on Cincinnati’s depth chart, Finley again showed why he’s now the favorite to back up Andy Dalton. The fourth-round pick out of N.C. State completed his first nine passes and was 20 of 26 for 150 yards with two TD passes.

The first six plays of the game featured seven flags, and the penalty parade continued all night. The Bengals and Redskins combined for 22 penalties that added up to 195 yards.

GLENDALE, Ariz. (AP) — Kyler Murray’s second outing as an NFL quarterback didn’t go nearly as well as his first, and the Raiders moved the ball with ease on the Cardinals‘ top defensive units.

Murray, the first overall pick in this year’s NFL draft who looked sharp in his debut last Thursday against the Los Angeles Chargers, finished 3 of 8 for 12 yards. He also ran once for 4 yards, and the Cardinals went three-and-out on two of his four series.

Raiders backup Mike Glennon completed 11 of 14 passes for 175 yards and a pair of touchdowns, and the Oakland defense tackled Murray in the end zone for a safety to lead the Raiders to their second preseason win.

Derek Carr, the Raiders’ No. 1 quarterback, played one series and led a touchdown drive, going 2 for 2 for 40 yards in his preseason debut. Carr threw 13 yards to Ryan Grant for a touchdown on the game’s opening drive, and former Cardinal Glennon picked up where Carr left off.

Raiders star wide receiver Antonio Brown came out for pregame warmups in full uniform and pads — and a helmet — and caught passes. He didn’t play in the game.