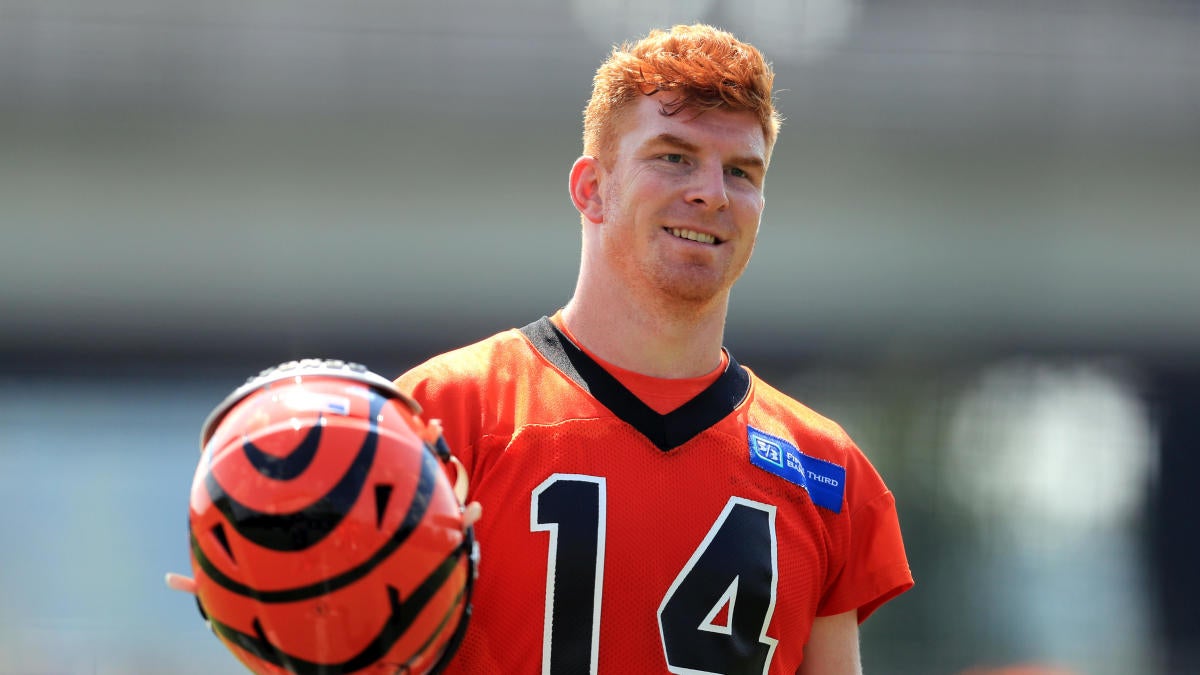 If you’ve been reading any NFL predictions over the past few weeks, you may have noticed that the Bengals are a popular pick to finish in last place in the AFC North this year.

Although the division is expected to be up for grabs in 2019, most people are counting the Bengals out of the race before the season even starts, and to be fair, it’s easy to see why that’s happening: The Bengals have a new coach (Zac Taylor), their star wide receiver is already injured and they had the worst defense in the NFL last year.

Of course, the Bengals aren’t the only team in the AFC North facing some serious questions going into the season. The Steelers have to replace Antonio Brown’s production. No one knows if Freddie Kitchens can actually coach (Bob Wylie doesn’t think he can) and we’re still not sure if Lamar Jackson can be good over the course of an entire season.

With the Bengals, it almost feels like they could be a dark horse team in the AFC North, but are they good enough to win it?

Let’s get to the bold predictions and find out.

The first and most important thing to remember about the Bengals in 2019 is that they can’t possibly be any worse than they were last year.

During the 2018 season, they were decimated by injuries. The Bengals had multiple players miss multiple games, including Andy Dalton, Joe Mixon, Tyler Boyd, A.J. Green, Billy Price, Giovani Bernard, Darqueze Dennard, Tyler EIfert, Dre Kirkpatrick, Carl Lawson and I could go on, but I think you get the point.

When the Bengals were at their healthiest early in the 2018 season, they shot off to a 4-1 start and looked like a  playoff contender, but then the injuries hit. Basically, in a season where nearly everything went wrong, they still managed to win six games and it’s nearly impossible to see them doing any worse than that in 2019.

Although their two biggest weaknesses from last year — offensive line and linebackers — are still weaknesses, they’ve gotten slightly better at both spots. As a matter of fact, it wouldn’t be surprising at all if the offense — despite the O-line — takes a huge step forward due to the arrival of Taylor.

For the past three years, the Bengals offense was stuck in a black of hole of mediocrity and that’s mostly because they had two offensive coordinators — Bill Lazor and Ken Zampese — who ran two stale and predictable offenses. Taylor might not end up being the next Sean McVay, but even if he just brings a little bit of McVay’s offensive fairy dust to Cincinnati, the Bengals could end up having one of the most surprising offenses in the NFL this year.

Also, let’s not forget about the Bengals schedule. They’ve got multiple very winnable games (Bills, Cardinals, Jaguars, Raiders, Jets, Dolphins). They also get to host a 49ers team that’s 0-10 in eastern time zone games since 2015. From a divisional standpoint, they get to play a Ravens team that they’re 7-3 against over the past five seasons. Basically, the Bengals got a friendly draw when it comes to their schedule.

The bold prediction here is that the Bengals go at least 8-8 and finish in second or third place in the AFC North, but not last place.

At this point in his career, Andy Dalton is who he is: He’s a slightly above average quarterback who has the potential to be great, but if only it the conditions around him are absolutely perfect. Those perfect conditions have only existed once in his career, and that came in 2015, when he was an MVP candidate for nearly the entire season before he suffered a thumb injury that ended his year.

The good news for Dalton is that this could be the year where those conditions arise again. For one, this will be the first time in his career where he’s had an offensive-minded head coach. Also, not only will Dalton have plenty of weapons around him, but Zac Taylor actually seems like he’ll know how to use them. The other thing about Dalton is that he should be highly motivated this year and that’s because 2019 is basically a make-or-break season that will most likely decide whether or not the Bengals keep him in Cincinnati.

Although Dalton’s contract runs through the 2020 season, the Bengals can cut ties with him after this year without taking any sort of salary cap hit.

If Andy Dalton is going to throw for 4,000 yards in 2019, those passes have to go to someone and the two best candidates are Boyd and Green, and yes, I’m very well aware that Green is injured right now. Even if Green misses the first one or two weeks of the season, it wouldn’t be surprising at all if he’s still able to hit the 1,000-yard mark.

When Green’s healthy, he’s one of the best receivers in the NFL and even though he hasn’t been completely healthy over the past few seasons, he’s still been able to produce. Green hit the 1,000-yard mark in 2016 even though he missed six games due to injury. He’s also hit the mark in six of his eight NFL seasons. Basically, if Green can get on the field for 12 or more games in 2019, he should be a lock to reach 1,000 yards. Green is in a contract year, and like Dalton, should be out to prove that he can still play.

As for Boyd, if he proved one thing last season, it’s that he has the potential to be a No. 1 receiver. Boyd is coming off a huge 2018 season where he led the Bengals in receiving yards (1,028), and he did that even though he missed the final two games of the season due to injury. Boyd had such a big year in 2018 that the Bengals rewarded him in July with a four-year extension.

Picking one of these guys to hit the 1,000-yard mark isn’t really bold, but picking both of them to hit it definitely is. Since drafting Dalton, the Bengals have never had two 1,000 yard receivers in the same season. As a matter of fact, the last time the Bengals pulled off the feat came in 2007 when Chad Johnson and T.J. Houshmandzadeh both topped 1,000 yards.

I know what you’re thinking, and yes, it does seem like we’ve gone from bold predictions to crazy ones here, but hear me out on this. First, let me just say that Mixon was one of the most under-the-radar running backs in the NFL last season. If you want stump a few friends at a bar this weekend, ask them if they know who led the AFC in rushing last year (Spoiler alert: It was Mixon).

That’s right. Mixon finished first in the AFC in rushing and fourth overall in the NFL with 1,168 yards, and he did that even though he missed two games. Of the three running backs who rushed for more yardage than him last season — Ezekiel Elliott, Saquon Barkley and Todd Gurley — it’s not that crazy to think that Mixon could end up topping all  of them this year.

For one, no one knows when Elliott’s actually going to show up to Dallas. With his holdout heading into its third week, we’re getting closer and closer to the possibility that he could miss a game or two. Also, even if he does return before Week 1, it will likely be a week or two before he’s in football shape. As for Barkley, he’s likely going to be facing 11 men in the box every week, at least as long as Eli Manning is the starting quarterback. On Gurley’s end, his knee is currently the biggest mystery in football and no one has any clue if he’ll be able to stay healthy through an entire season.

Speaking of Gurley, with Taylor running the show in Cincinnati, there’s a good chance we’re going to see Mixon doing a lot of the stuff that Gurley does in L.A.

As a matter of fact, Mixon seems pretty convinced that the Bengals can be the Midwest version of the Rams.

“The film speaks for itself,” Mixon said in late July. “You see the Rams running wild all day. We’ve got that same offense. I would think we have better players than them with these offensive weapons. I would think we can do the same stuff, if not more, than they can.”

That’s a bold prediction from Mixon, and apparently, we’re drinking from the same Bengals Kool-Aid canister, because we’re both predicting big things for the Bengals offense in 2019. The bold prediction here is that Mixon overtakes everyone and wins the 2019 NFL rushing title.

There were only two teams in the NFL that hit the 20-interception mark in 2018 and those two teams are basically proof that any defense can hit the mark under the right circumstances. The Bears led the NFL with 27 picks last season, which probably won’t come as a shock to anyone, considering they had one of the best defenses in the league last year. The other team to hit the 20-pick mark was the Dolphins (21), which would probably come as a surprise to most people, since they had one of the worst defenses in the NFL last year.

On the Bengals’ end, they had 12 interceptions, which means they need to somehow add eight to that total. Here’s the thing about the Bengals, they had the worst pass defense in the league last season, which means teams are likely going to try to throw the ball on them as often as possible in 2019.

If your opponent is passing the ball more, that means more opportunities for interceptions, which could work out well for a Bengals secondary that’s arguably top-15 in the NFL and maybe even top-10 (Pro Football Focus has them ranked 13th heading into the 2019 season). Not only do the Bengals have a shutdown corner in William Jackson, but they also have two other talented corners in Dre Kirkpatrick and Darqueze Dennard. Oh, and there’s also safety Shawn Williams, who picked off five passes last season, which ranked fifth overall in the NFL (The team’s inability to stop the pass last year had more to do with the play of their linebackers than the play of their secondary).

Also, let’s not forget the Bengals have a very interception friendly schedule. Of the five quarterbacks who threw the most interceptions last season, the Bengals get to play six games against them (Ben Roethlisberger x 2, Baker Mayfield x 2, Josh Rosen, Sam Darnold).