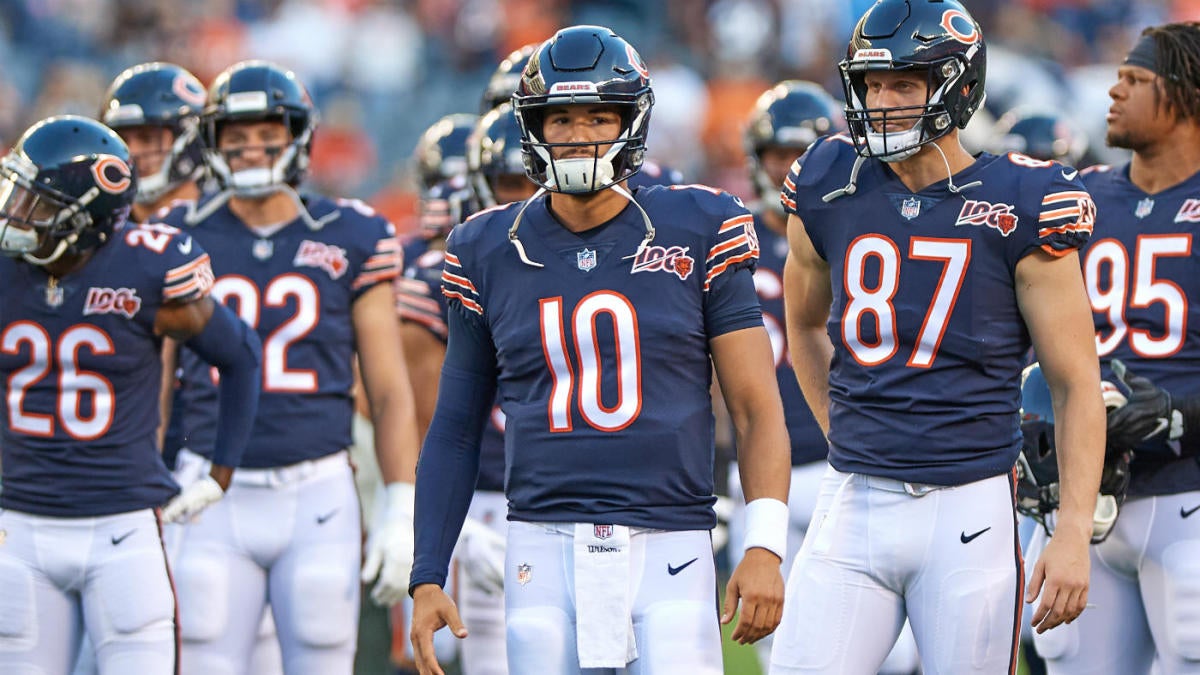 In a somewhat surprising and complete reversal of last year’s hype train, the Chicago Bears are sticking out as a major fade for multiple NFL analysts heading into the 2019 season. I’m already on the list of people who believe the Bears are a prime regression candidate in 2019 and one of the top teams that could take a step back and miss the playoffs. Not everyone is, AHEM, Bearish on Chicago — there’s at least one nutjob out there predicting Mitchell Trubisky outscores Aaron Rodgers.

This is not me beating a drum here, because it actually came up independently and unprompted in multiple conversations this week on the Pick Six Podcast — it’s our daily NFL pod and you should be subscribing to get my dulcet tones fired into your eardrums every morning — as we begin to really dive into the nitty gritty of previewing the NFL season.

Specifically, both Aaron Schatz of Football Outsiders and Andy Benoit of The MMQB believe the Bears are primed to drop off some in 2019. You can hear Aaron discuss that plus much more in the player below and check out Andy breaking down all things film-related by hitting the subscribe button or navigating the podcast embed.

Part of the defensive regression will come from the Bears thriving off turnovers at a completely unsustainable rate. If you read Football Outsiders Almanac — and you should, because it’s awesome, buy your own copy right here — you’ll understand that history tells us teams who generate a lot of turnovers are likely to regress to the mean when it comes to the following year’s turnover rate.

“Chicago last year had a takeaway on 19.1 percent of defensive drives. 19.1 percent. The next highest number was the Rams at 16.5,” Schatz explained. “And the interception numbers are even crazier: 14.8 percent of drives ended with an interception. That is more than twice the NFL average. So there’s a lot of regression expected there.

“And also just the fact that defense is less consistent than offense. The average DVOA rating — our DVOA rating, that’s our main team efficiency rating — the average rating for a team that is No. 1 on defense the following year is ninth. And it’s possible the Bears are a team like that. On average I would think I’d expect their defense to be fourth or fifth. You also have to remember they’re breaking in a new defensive coordinator with a new system.

“Remember what I said [earlier in the pod], when you have a new defensive coordinator you take a step back, all things being equal. And the problem is the Chicago offense was not good enough that if they have the fourth or fifth best defense, that that’s a winning team. The Chicago offense would need to take a big step forward this year in order to be a playoff team if they have the fourth best defense instead of having one of the best defenses of all time, which is what they had last year.”

There’s actually an interesting comp of a projection from last year for Football Outsiders: the 2018 Jacksonville Jaguars. (That is less interesting if you’re a Bears fan, probably, but you get the point.)

“It’s very similar to what our projection was for Jacksonville a year ago when we said basically the same thing,” Schatz continued. “The defense was fourth or fifth in the league and the offense got worse and the Jaguars completely fell apart.”

This is something I harped on in my playoff piece. If Trubisky can take a huge leap forward in Year 2 of Matt Nagy’s system, the Bears could potentially counterbalance some inevitable defensive decline with big production on offense. So how does Trubisky stack up comparatively in terms of other young quarterbacks who have taken a big step in their second year, as Trubisky did in 2018? Pretty good, but it might not matter without another massive leap.

“Well, his completion rate went way up, his number of touchdowns went way up, his yards per attempt went up, his interceptions, however, also went up. He had a good second year improvement and despite a good second year improvement, Chicago ended up 20th in our offensive ratings. So let’s say that he improves a little bit more in Year 3 and they’re like 15th or 16th. 15th or 16th on offense with like the fifth or sixth best defense is 8-8.”

So, not ideal for the Bears. As Schatz noted, the NFC North is one of the toughest divisions in football and was the hardest for FO to break down in terms of win totals and projections. Everyone could fall short of their projections and the Bears could find their way to a 9-7 season and a division record. But even that would be regression!

The stats aren’t the only concerning thing. The film is an issue too. As Benoit explained on Monday’s podcast, the difference between what Fangio runs and what Pagano runs is pretty massive. Benoit also doesn’t believe Trubisky and the offense can make up the gap.

“I think the Bears are going to take a step back, guys. I don’t think this is the same defense,” Benoit said. “The offense I don’t think is quite [capable of carrying the defense] yet and a lot of it comes down to Trubisky. It’s a big year from him. They did not ask a lot of him last year. Coaches tell you how they fell by what they ask them to do. We could also argue they didn’t need Trubisky to do a lot either. So why fill his plate when you can bring him on at a more comfortable pace? So we’ll find out this year.”

For Benoit, the biggest difference for the defense might not even the natural turnover regression or the attrition of players in free agency. Andy sees the schematic differences causing an issue with the personnel as they transition from Vic Fangio to new defensive coordinator Chuck Pagano, both “excellent coaches.”

“I think Fangio is the hardest coach in the NFL to play against, the hardest defensive play-caller. What he does that’s so difficult, they play two-deep, zone looks. They matchup out of the zone so it’s man-to-man principles in the zone. They have different match rules that we could get into, but we’ll get caught in the weeds if we do,” Benoit explained. “Suffice to say, it’s hard to understand the match rules on the fly but it’s two-deep zone looks. They’re very blurry so you’re not sure what kind of zone it is, because those safeties and linebackers move around just ever so much. And when you factor all that in and add in a Khalil Mack who’s getting to the quarterback quickly, that’s where you get the interceptions. The ball comes out off schedule for the offense against a blurry, unpredictable look.

“What Chuck Pagano does is try and overwhelm you with pressure. Instead of blurry zone coverage he plays man-to-man, because almost any blitz in the NFL or any blitz at any level has man-to-man principles behind it. It has to. And he’s going to bring fast pressure to you. That’s a very different style of approach. It’s not going to create as many turnovers because man-to-man defenders don’t get as many turnovers because their eyes are on the man and not the ball.”

Problematic for this is the Bears corners being guys who thrive in zone perhaps more so than they do in man coverage.

“The other thing is, I think it’s going to expose those Bears cornerbacks. Kyle Fuller is an excellent player and I think Prince Amukamara is a very good player in a matchup zone scheme where they have some help from the safety and they can keep their eyes on the quarterback more,” Benoit continued. “I don’t think they’re pure man-to-man defenders downfield, though, and that system under Pagano is going to ask them to do that and they’ll be good but not great at it.”

Making it tougher on this defense? The Bears have to play a bunch of veteran quarterbacks this season, guys who are not going to succumb to pressure the way younger QBs might. Just after the bye AND out of their division are: Drew Brees, Philip Rivers, Carson Wentz, Jared Goff, Eli Manning, Derek Carr Dak Prescott and Patrick Mahomes. I don’t care what you think about those guys, they’re all veteran quarterbacks and most of those teams have pretty good offensive lines and receiving weapons as well. It’s not going to be simple to overpower them.