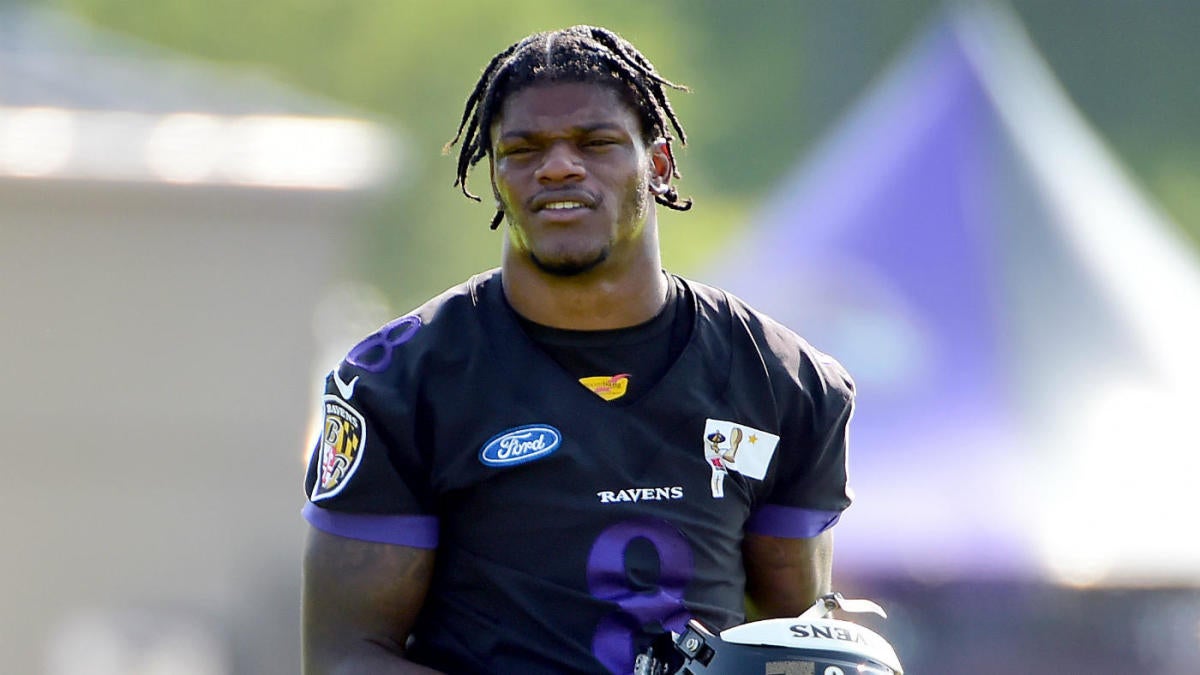 For the vast majority of the John Harbaugh era, the Baltimore Ravens have been remarkably boring — not necessarily in a bad way, but just in terms of their consistency. Under Harbaugh for 11 seasons, the Ravens have finished under .500 only once. Up until last season, they always started Joe Flacco at quarterback — and there’s not many interesting things one can say about Joe Flacco.

Yet all of a sudden, the Ravens have emerged as one of the league’s most interesting teams. They’re a complete and total mystery. Which makes making bold predictions about them a little bit easier.

It all began with the decision to trade back into the first round to grab Lamar Jackson in last year’s draft. By the halfway point of the season, the Ravens inserted Jackson into the fray and rebuilt their offense on the fly, constructing a run-heavy system that belonged to a different era of football. With Jackson as the starter for the final seven games of the season, the Ravens averaged an insane 45.1 rushing attempts per game. Improbably, it worked. The Ravens went 6-1 down the stretch — with their only loss coming in overtime against the Chiefs in Kansas City — even though Jackson averaged only 13.1 completions per start.

The offseason brought even more change to Baltimore. Key defensive contributors in C.J. Mosley, Za’Darius Smith, and Terrell Suggs departed in free agency, while former Seahawks safety Earl Thomas joined the cause. Mark Ingram was signed and Justice Hill was drafted to add even more weapons to the Ravens’ running game. The Ravens made Marquise Brown the highest-drafted receiver. Greg Roman, best known for coaching quarterbacks like Colin Kaepernick and Tyrod Taylor, was named offensive coordinator.

“The offense will look different,” backup quarterback Robert Griffin III said in June. “I think we’ll shock some people with what we’re going to do.”

And so, the Ravens will enter the season as one of the league’s biggest mysteries. What will their offense look like? How much will Jackson throw the ball? Who will lead the team’s rushing attack? Will Brown be good enough right away to make up for an otherwise lackluster receiving group? Can the Ravens overcome the losses they sustained in free agency, particularly on the defensive side of the ball?

With all that in mind, let’s make five bold predictions about the Ravens’ upcoming season. We begin at quarterback.

Twenty-five touchdowns might not seem like a lot when factoring in both passing and rushing touchdowns, but it’s going to be difficult for Jackson to get there. For context, consider that Kaepernick never accounted for more than 25 touchdowns in a single season with Roman in San Francisco.

In his seven regular-season starts last year, Jackson was responsible for nine touchdowns — five as a passer and four as a runner. Put another way, he averaged 1.3 touchdowns per start. Extrapolated to a full 16-game season, that would come out to 20.6 touchdowns. So, he needs to improve his total by six touchdowns. That’s certainly doable, which is why this prediction counts as a bold one.

Jackson’s legs give him a chance to score a ton of touchdowns on the ground, and his athleticism should come in handy in the red zone — not to mention, it wouldn’t be surprising if he breaks free for a couple of big touchdowns. The question is, can he throw somewhere around 20 touchdowns? The Ravens’ addition of Brown and Miles Boykin in the draft should help the Ravens in the long term, but it often takes rookie receivers a while to adjust to the NFL. For Jackson to get to 25 touchdowns, he might need some luck in the form of those touch passes that are more like handoffs, but technically count as touchdowns.

I think it’ll be close. But Jackson’s inconsistencies as a passer during his rookie season make me believe he’s more likely to finish with 20-25 touchdowns as opposed to 26-30 touchdowns. The Ravens’ receiver group is promising, but ultimately unproven. While I love Jackson’s long-term outlook in the league, 2019 will likely be a year of growing pains for the young quarterback and his young receivers. I think we’ll see an improvement from him, but I also think it’ll be a modest improvement. 2020 feels more likely to be his breakout.

The Ravens need to throw the ball more, but don’t expect them to become a pass-first team. They’re going to rely on the running game after adding Mark Ingram in free agency and Justice Hill in the fourth round. That’s not the bold prediction. The bold prediction is this: Hill — not Ingram — will lead the team in total yards.

Ingram is the safer bet. He’s averaging 950.6 yards from scrimmage over his eight-year career. But he’s also 29 years old. While Ingram should start the season as the team’s primary back, he might cede touches to Hill over the course of the season.

And Hill is talented. He drew pre-draft comparisons to Phillip Lindsay. He averaged 1,281 yards from scrimmage per season at Oklahoma State. He’s going to be a major weapon in the Ravens offense.

It should be tight between the two players, both of whom should garner tons of touches. But the bold prediction here is for Hill to overtake Ingram as the team’s best back and to gain a slight edge in total yards by the end of the season.

Eight hundred yards might not sound like a lot for a receiver, but consider the recent history of rookie receivers. Last season, Calvin Ridley led rookie receivers with 821 yards. The year before, JuJu Smith-Schuster led the way with 917 yards. Then consider the fact that Brown is playing with a quarterback who averaged 13.1 completions per start last season. In that sense, racking up 800 yards in his rookie season would be an awesome accomplishment.

While I don’t expect it to be completely smooth sailing between Brown and Jackson, I do expect them to hook up for a good number of chunk plays. Brown features elite speed. One pre-draft comparison? DeSean Jackson. There’s a very real chance the Lamar Jackson-Brown combination will be a boom or bust relationship. So while I’m predicting Brown to finish with under 800 yards, I don’t think his rookie season will be a failure. He should hit on several home-runs. But consistency might be lacking between a young quarterback with spotty accuracy and a rookie receiver adjusting to the NFL.

Before Thomas went down at the beginning of last season, he had already racked up three interceptions in four games. In his career, he’s never eclipsed five picks in a single season, having finished with exactly five interceptions on three different occasions. However, since he entered the league in 2010, he ranks third in interceptions among all players. He’s remarkably consistent.

The bold prediction is that Thomas will finally get over the hump and set a new career high in interceptions. As the beginning of last season proved, Thomas is hardly declining. He was on pace to set a new career high before an injury robbed him of that opportunity. He’s still the best single-high safety in football. If he can stay healthy, he should continue to do what he does best: patrol the deep portion of the field with remarkable range.

The Ravens are almost always competitive under Harbaugh, winning 59 percent of their games and qualifying for the playoffs seven times in 11 years. So, I expect they’ll remain competitive again in 2019. And I think they’ll challenge for both the division crown and a wild card spot.

It feels like a safe bet to say that the Ravens’ playoff hopes will come down to Weeks 16 and 17, when they’ll face the Browns in Cleveland and the Steelers at home. All three teams should be competing for the AFC North title. That’s not the bold prediction.

The bold prediction is this: The Ravens will lose both games and miss the playoffs.

I don’t like picking against the Ravens. I think Harbaugh is one of the league’s best coaches. I think Jackson is going to develop into a great quarterback over time. But I also think their losses on defense can’t be ignored. I also think Jackson will endure growing pains as a passer. And I think the Browns and Steelers are both better teams from a talent standpoint. And it’s not like I’m predicting the Ravens will finish with a 6-10 record. I think they’ll be 8-6 or 9-5 entering the final two weeks of the season before dropping their last two contests to finish 8-8 or 9-7.

The future is bright in Baltimore. But a tough division and a young team that is still developing could result in a playoff-less season. The defense, which ranked third in DVOA last year, could take a step back after losing key contributors. The offense will likely struggle at times, especially if they’re forced to play from behind more often. Above all else, the Ravens will be forced to fight off two very good teams in Cleveland and Pittsburgh, both of which have better quarterbacks than Baltimore and defenses that could emerge as elite units during the upcoming season.

The Ravens are a good football team. But this bold prediction says they’re not quite good enough to qualify for the playoffs.