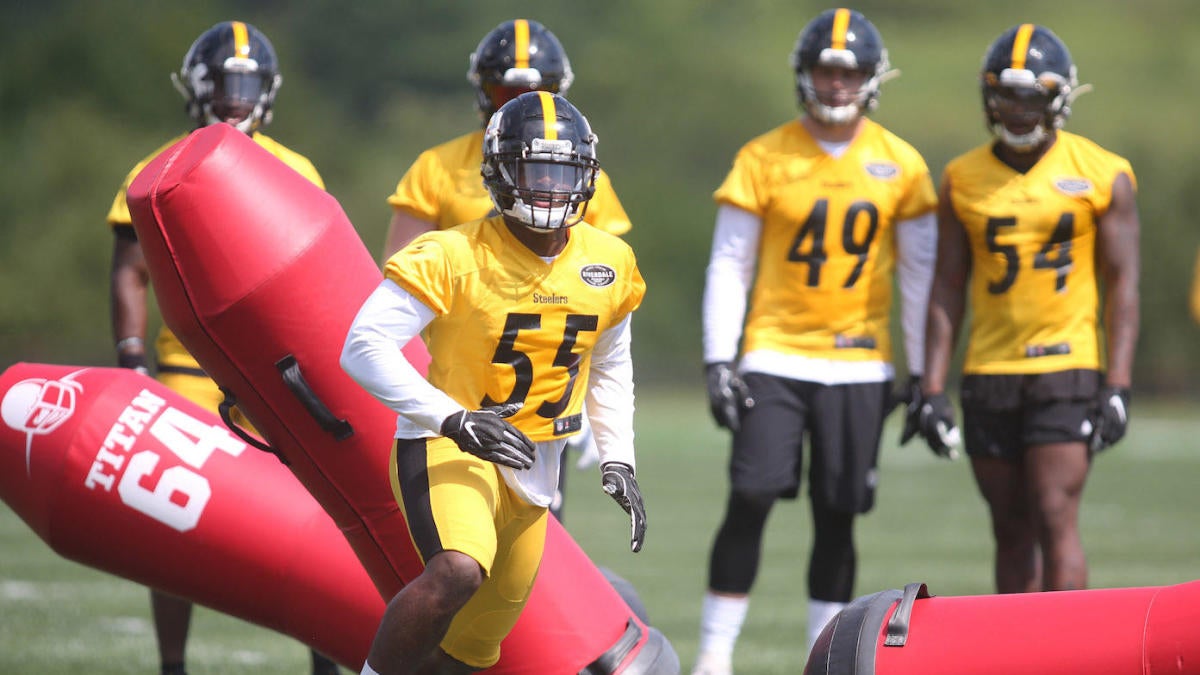 It’s Superlative Week on the Pick Six Podcast here at CBS Sports — it’s our daily NFL podcast, listen to the latest episode below and bang the subscribe button right here — and we’ve hit on a number of different topics, including some potential breakout offenses, five teams who will miss the playoffs after making it last season and five teams who will take a step back. We even did the mean thing and ranked a bunch of hot seat coaches.

The list wouldn’t be complete without breakout defensive teams, which what we tackled on Friday’s show. You can hear that pod below and make sure and subscribe — we’ve got a killer lineup planned for this coming week as we go full “Football Nerd” over the next five days or so. Options include: iTunes, Spotify, Stitcher.

The qualifications here were basically to find surprise teams that could finish with the top defense in football. We ruled out the Bears, Ravens, Jaguars, Bills and Vikings, which was basically just me looking at the rankings from last year and eliminating teams that wouldn’t surprise anyone if they were the best defense in football. (Maybe the Bills don’t apply here? Would people be surprised if they were elite? You shouldn’t be.)

If you think we missed someone or want to make the case do so by hollering at me on Twitter @WillBrinson.

Perhaps the biggest “cheat” team on this list, the Broncos come first because they might be most likely to be the top defense this coming season, if only because they were the top defense in 2015 and 2016. Denver has the personnel to make the leap back to the top of the list and it starts with their pass rushers. Von Miller is a perennial DPOY candidate and still underrated against the run. Bradley Chubb was top 20 in total sacks last year and threatened the rookie sack record. The numbers might not tell the whole story either when it comes to the pressures he generated in 2018. Denver also picked up Bryce Callahan from the Bears, which should not go unnoticed given the Broncos also poached Vic Fangio, Chicago’s defensive coordinator, to be their new head coach. The consensus seems to be Fangio will have a bigger focus on defense than a normal head coach might have in terms of balancing his workload. It makes sense, and it could pay big-time dividends, especially for linebackers Todd Davis and Josey Jewell. Chris Harris returning was massive; losing him would have been unacceptable for the back end. Kareem Jackson was a nice veteran add this offseason and Justin Simmons is a budding young safety. Playing in a division with the Chiefs, Chargers and Raiders is a tough ask but it shouldn’t be a shock if the Broncos return to the top of the heap.

It’s been quite some time since we saw the Steelers dominate on defense. But despite appearing to completely fall off a cliff following Ryan Shazier’s injury, the Steelers have managed to rank in the top half of the league DVOA-wise for the last few years. The addition of linebacker Devin Bush out of Michigan — the rare prospect Kevin Colbert was willing to move up and take in the draft — should do wonders for Pittsburgh’s ability against the run. Mark Barron gives them another presence in terms of a run-thumper. T.J. Watt isn’t his brother, but he isn’t putting the family to shame either after registering 13 sacks last year. He could be due for a monster year if he finds another level. Maybe Bud Dupree will be a late bloomer? Cam Hayward is underrated and just a great foundational piece on the defensive line who has quietly emerged as a sack monster, registering 20 sacks the last two seasons combined. The secondary is still questionable but Joe Haden dodging a major injury in the preseason is a huge help. Terrell Edmunds could take a big leap in his second season. If Bush can fill the void Shazier left and a couple of the young top draft picks take another leap, this could be serious sleeper for top defense in football.

Maybe the Cowboys are too obvious of a choice as well? They were top 10 by all metrics, but remember, this was a HUGE leap forward for Dallas last season. The addition of Leighton Vander Esch as a monster in the middle, the continued emergence of DeMarcus Lawrence as one of the best pass rushers in football and the breakout of Jaylon Smith highlighted this unit morphing from  a stars/scrubs defense with some nice highlights into a bonafide terror for opposing offenses. The signature game for this D — locking down a streaking Saints team late in the season on national television in a stunning upset win — made a lot of people realize the undergoing evolution in Dallas. Adding Robert Quinn was a plus this offseason, but his fractured hand should bring to light an underrated storyline when it comes to the health of this defense up front. Lawrence had surgery shortly after signing his new deal (that might have been an underrated aspect in terms of propelling the pace of negotiations), Quinn is now hurt, leaving Taco Charlton as a potential Day 1 top end pass rusher. If he can deliver on his draft pedigree, that’s great. If not, this unit could be thin out of the gate. There’s talent across the board, though, with LVE/Smith at linebacker (plus Sean Lee!) and Byron Jones/Xavier Woods headlining the defense. Chidobe Awuze is a breakout candidate — if he or a few other recent draft picks take a step forward and everyone stays healthy, this could be a top tier team in the NFL.

Easily the most underrated group on this list, would you have guessed the Titans were top 10 in yards allowed and top five in points allowed? Most people probably wouldn’t. But this is a very good defense and it’s got depth and talent across the board. Jurrell Casey is probably the most underrated interior lineman in the NFL. Cameron Wake is an intriguing veteran free agent pickup to pair with Harold Landry, who looks like an early draft steal. I wouldn’t be surprised if Rashaan Evans took a major step forward this year. ANY kind of bounceback for Malcolm Butler would be a massive addition for a secondary that is quietly one of the best in the game: Logan Ryan, Adoree Jackson and fan-favorite Kevin Byard plus a good Butler and Kenny Vaccaro on the back end? That’s really good starting talent. Dean Pees has been banging out top 10 defenses every stop of the way during his NFL coaching career. It’s possible he could morph this unit into one of the best in the NFL this season.

Los Angeles posted a top-10 DVOA defense in 2016 but fell back to earth in 2017 a little bit. Further decline could have been a possibility until the Bolts stole Derwin James in the first round of the 2018 draft, and the high-end modern safety injected a shot of life into this unit. Adding Jerry Tillery out of Notre Dame isn’t just the third high-profile defensive pick in the last four years, it’s also a big-time depth/rotation addition to the defensive line. Brandon Mebane, Justin Jones and Tillery is a great mix on the interior and they’re bracketed by Joey Bosa and Melvin Ingram, the best one-two combo of pass rushers in the league when healthy. Linebacker is an issue here, as evidenced by the 45 defensive backs that got demolished in New England during the playoffs last year. But adding Thomas Davis and bringing back Denzel Perryman should solve some of the issues. The secondary is loaded with James, Casey Hayward and Desmond King all serving as standout players at their respective positions. Gus Bradley wasn’t a great head coach, but he’s a very good defensive coordinator. A full, healthy season from this Chargers defense (unlikely because, well, Chargers) might mean a major breakthrough.

It’s a longshot, but as I noted on the podcast last week, there’s a decent chance the Saints defense could overtake the offense as the strength of the team this season. It’s not a slight on Drew Brees and Co: the defense is just loaded. Sean Payton and assistant GM Jeff Ireland — once outcast from Miami after the Dez Bryant draft fiasco — have been nailing picks the last few years. The 2016 and 2017 drafts produced Marshon Lattimore, Vonn Bell, Sheldon Rankins, Alex Anzalone, and Marcus Williams. That’s a ton of viable starters in two years of drafting, even if there have been ups and downs for each. Rankins needs to get healthy or you’d have to ding the defensive line a bit (but then you can counter by pointing out the Saints also drafted David Onyemata in 2016). The real need here might be a Marcus Davenport breakthrough in 2019. The Saints gave up a first-round pick to move up and grab him last year and he flashed at times, but 4.5 sacks is disappointing. He was still raw coming out of UTSA, though, so it’s possible he makes a leap here. Cameron Jordan is a great DPOY value at 33-1 odds in Vegas. If he produces a third-straight double-digit sack season, we could get a lot of “underrated” media buzz pushing him forward, and rightfully so. Dennis Allen got skewered on the way out of Oakland, but he’s done a great job with this group. Rankins healthy and Davenport breaking out would make this a sleeper for the top spot. Imagine telling someone from 2014 or 2015 the Saints could potentially have the best defense in football.