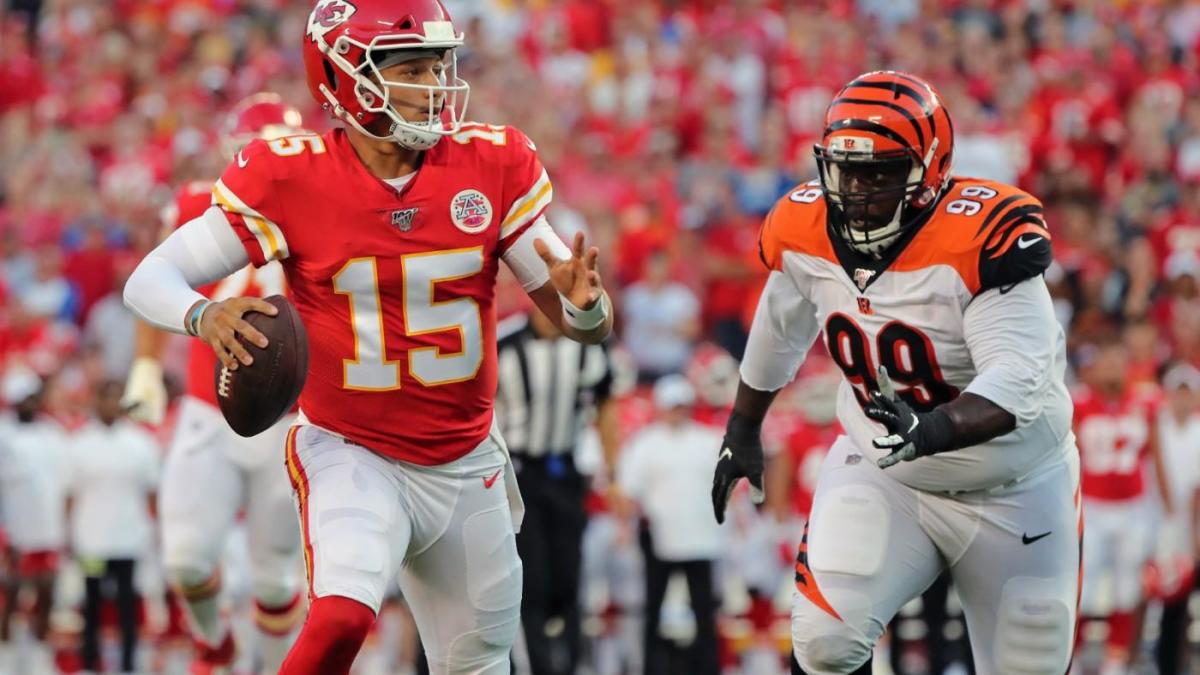 With that, the first week of the preseason is already over. Over the past three days, all 32 teams have taken the field across 16 games. Beginning in just a few days, they’ll do it all over again — and again and again until the regular season finally arrives. In the meantime, the preseason will have to do. We’ll take what we can get.

For the most part, the first week of the preseason belonged to the rookies making their NFL debuts. All three first-round quarterbacks — Kyler Murray, Daniel Jones, and Dwayne Haskins — made their debuts. Meanwhile, established stars like Patrick Mahomes and Baker Mayfield were limited to one series each. Such is the way the preseason typically unfolds.

It turns out Patrick Mahomes is still very good at playing quarterback. It turns out the Chiefs’ first-team offense is still unstoppable.

The reigning MVP started for the Chiefs on Saturday night and ended up leading one series. That one series ended in the end zone. After the Chiefs’ new-look defense began the game by allowing a touchdown, Mahomes led the offense on a seven-play, 83-yard touchdown drive. On that series, Mahomes went 4 of 4 for 66 yards. He also scrambled for 10 yards — and that scramble might’ve went for a touchdown if it had been a regular-season game.

On his first throw of the evening, he connected with tight end Travis Kelce down the sideline for 36 yards. This should look familiar:

Later on the series, Mahomes had a chance to score a touchdown on the ground after making a nifty move, but he wisely slid to the ground to avoid contact.

The Chiefs scored on the ground two plays later. Call it a successful start to the preseason for Mahomes and the Chiefs’ offense, which shouldn’t come as a surprise given just how unstoppable they were a season ago.

The Chiefs’ defense, on the other hand …

The Bengals hired Zac Taylor as their new coach because he’s supposed to be an offensive mastermind after working under Sean McVay for the past couple years. While there’s no way to know how the Bengals’ offense will look come Week 1 of the regular season, Saturday night offered our first glimpse at Taylor’s offense. Most importantly, it offered our first glimpse at Andy Dalton in Taylor’s offense.

Against the Chiefs’ defense, Dalton played one series. That one series went for 75 yards on 14 plays, and it ended with a touchdown. While Dalton emerged with an impressive stat line — 7 of 9 for 80 yards — it wasn’t all good for the veteran quarterback. He spent most of his time checking the ball down. When he did throw downfield, the results were mixed.

With a severe underthrow, he missed what should’ve been an easy touchdown. But he followed up that miss with an impressive throw down the right sideline that featured tremendous ball placement and set up the Bengals near the goal line.

At 31, Dalton is entering the most important season of his career from a self-preservation standpoint. If he struggles under Taylor and the Bengals wind up with a high pick in next year’s draft, the team could very well decide to replace him with a rookie who Taylor can develop. If Dalton plays well under Taylor, the Bengals could decide that his 2020 cap hit ($17.7 million) is a bargain.

How Dalton fares in the preseason will hardly matter in the long-term, but leading a touchdown drive on his lone series was just about the best start he could’ve hoped for — that ugly miss downfield notwithstanding.

So this is why the Chiefs drafted Mecole Hardman

It’s going to be difficult for second-round rookie Mecole Hardman to become a major piece of the Chiefs’ offense given just how stacked the team is at the skill positions, but Hardman should contribute immediately with important chunk plays. Already on Saturday night, it was evident why the Chiefs drafted him. It was also evident why it’s going to be hard to keep him off the field.

He’s capable of turning touch passes in the backfield into touchdowns 17 yards later:

As if the Chiefs needed even more speed on offense, they just added Hardman to an offense that also includes Tyreek Hill, Sammy Watkins, and Travis Kelce. Imagine the Chiefs operating out of 11 personnel (one back, one tight end, and three receivers) with all four of those players on the field.

On that note, it’s still not clear how defenses are supposed to stop the Chiefs during the upcoming season.

Speaking of Chiefs rookies, Hardman wasn’t the only one who impressed. So did sixth-round running back Darwin Thompson, who went Beast Mode over the Bengals’ defense.

A little later, he showed off his versatility as a pass catcher, burning the slower linebacker over the middle and using his afterburners after making the catch to breach the end zone.

Remember when Andy Reid said the Chiefs would deploy a committee system at running back? While Thompson might find it challenging to get a ton of carries ahead of Damien Williams, Carlos Hyde, and Darrel Williams, he should at least factor into the offense. The Chiefs want their running backs to be versatile playmakers who can contribute as runners and pass catchers. It’s a requirement for Reid’s scheme. Thompson appears to have the skillset to thrive in this offense.

Again: not sure how anyone is going to slow down the Chiefs during the upcoming season.

During the 49ers game, news broke that receiver Trent Taylor underwent surgery on his toe, which will result in his absence at the beginning of the season. Taylor isn’t a household name around the league, but he was expected to start at slot receiver, which makes his injury an important one.

The likely candidate to replace Taylor is rookie Jalen Hurd, a third-round pick out of Baylor. According to Pro Football Focus’ Jeff Deeney, 96 percent of Hurd’s snaps at Baylor last season came out of the slot.

It didn’t take Hurd long to demonstrate what he can do as the team’s new slot guy. Midway through the second quarter, Hurd caught a pass just outside the 5-yard line and proceeded to barrel his way through a defender in order to reach the end zone. It was an impressive display of power at the goal line.

Due to Taylor’s injury, Hurd is going to get a chance to take on a larger role than expected much earlier than expected. So far, so good.

Checking in on the Raiders backup battle

Derek Carr’s place atop the depth chart is secure, but the Raiders do have a competition for the backup job brewing. The contenders: Veteran Mike Glennon and former Bills quarterback (and interception machine) Nathan Peterman. On Thursday, both oft-maligned quarterbacks played a half, with Glennon drawing the start.

Glennon actually completed 17 of his 25 pass attempts for 200 yards, averaging a healthy 8.0 yards per attempt, but his incompletions were costly — two in particular. Twice, Glennon was picked off on ill-advised throws, with one of his two interceptions coming in the red zone.

Glennon finished with a 58.8 passer rating, and the Raiders scored seven points with him at quarterback.

On the other side of the break, Peterman entered the fray. He promptly led a touchdown drive.

The key play on the series? A 50-yard scramble by Peterman that brought the Raiders to within striking distance.

He followed up with a touchdown from in close.

I can’t believe I’m saying this, but Peterman might actually have a chance to win the backup job over Glennon, who has been in the league for far longer and has never shown the ability to play quarterback at a competent level. Don’t mistake that as an endorsement of Peterman. It’s just that Peterman is young enough where he still has a chance to develop into something. It might not be likely, but it isn’t entirely impossible for Peterman to become a decent backup quarterback.