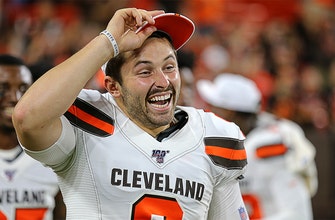 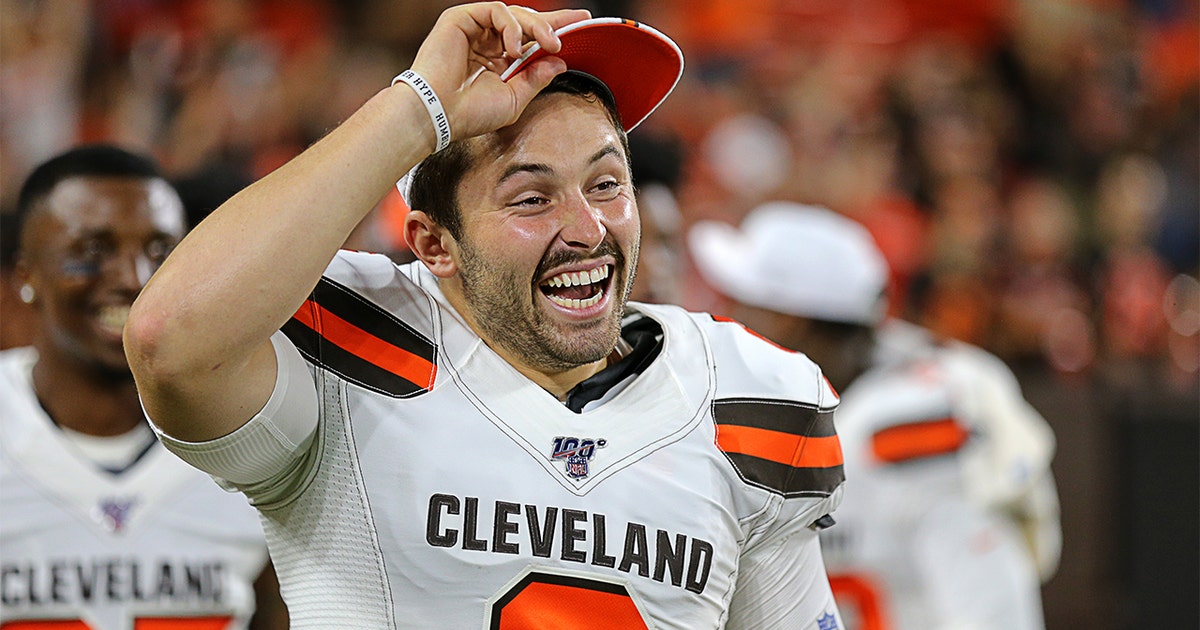 We are still weeks away from knowing whether the Cleveland Browns can back up the preseason hype that suggests they could be a challenger for the AFC North.

But the other kind of hype? The kind that says the Browns are going to be the most fascinating team in the National Football League this year? They’re backing that one up already, resoundingly so.

The Browns got splashy with a list of signings headed by Odell Beckham Jr., Baker Mayfield has noisy charisma that you can’t ignore, and going into the campaign, Cleveland has a chance to feel good about its football team for the first time in a loooong time.

Yet there is something about this team that suggests something really, genuinely interesting is never far away from happening.

There are the fun storylines, like Mayfield revving up fans of his adopted city by shot-gunning a beer at an Indians game. They like things like that in Cleveland.

I mean Baker opened his up with his teeth. Just sayin’ https://t.co/L444F8NsCt

“Of course, Cleveland loves him,” FOX Sports’ Colin Cowherd said, on The Herd. “Because it is Cleveland. This is a franchise that hasn’t had any fun at quarterback for 30 years. Baker Mayfield is a lot of fun and he is a showman.

“Right now, they are the coolest frat on campus. Which is the best place to be during Rush Week, September. No one has flunked out yet.”

There has also been the typical ebullient football talk, with defensive end Myles Garrett putting the Browns forward as the “team to beat” in the division.

There was even a political-style plot twist this week when head coach Freddie Kitchens spoke of stamping out “leaks” in the organization, seemingly a response to withering criticism from former offensive line coach Bob Wylie.

And then there are stories good enough that they should make a movie about them.

A few months ago Damon Sheehy-Guiseppi was sleeping outside because he couldn’t afford a hotel room. He spent the little money he had on training.

He talked his way into a workout and tonight he did this. 🙌

During Thursday night’s preseason opener, a 30-10 victory over the Washington Redskins, punt returned Damon Sheehy-Guiseppi took one back 86 yards for a touchdown, and was promptly mobbed by his teammates, who came streaming into the end zone to celebrate with him. Such a reaction in August might seem a little excessive, until you consider what it took for Sheehy-Guiseppi to get there.

A former junior college standout, he slept outside and in a fitness center in recent weeks because he’d spent the last of his money on working out with an elite trainer, then showed up and talked his way into the tryout with the Browns. And, in a note right out of Hollywood, Sheehy-Guiseppi broke out on Thursday night in a pair of OBJ’s cleats, as he’d misplaced his own prior to the game, and OBJ was more than happy to share. Remarkable.

Another cool twist on this story: Sheehy-Guiseppi told me he wore Odell Beckham’s cleats tonight. Says he had misplaced the ones he wanted to wear. Beckham, who has taken a liking to the kid, said, “Here, I broke these in for you.” pic.twitter.com/o41GIhGhBm

So yeah, the Browns are going to have people talking about them, and, it seems, at least a good amount of that will be for the right reasons. ESPN rated the Browns top in its annual list grading teams by their under-25 talent. With Beckham and Jarvis Landry fronting a dynamic receiving corps, there are going to be at least some offensive highlights – after so many years of lowlights.

Cleveland fans don’t have a particularly high bar for what they need to feel content. They were happy with last season’s improvement, an uptick that was exceedingly easy to calculate given that seven wins was seven more than the 0-16 record of the previous campaign. Mayfield threw for a rookie-record 27 touchdowns.

Now? Well, they’re the most talked-about team in the NFL — and, at +1700 odds to win it all, they’re in the same discussion as teams such as the Chargers, Colts, Eagles and Bears as Super Bowl contenders, at least according to the handicappers.

For sure, the Browns are not for everybody. Mayfield and Beckham are among the most polarizing NFL players you could find, while running back Kareem Hunt will be firmly under scrutiny when he returns from an eight-game suspension handed down after the release of a video that showed him shoving and kicking a woman.

But if Mayfield rubs people the wrong way, or if those outside Cleveland don’t understand Beckham’s particular disposition, so be it. The Browns aren’t looking to be liked, they’re just trying to win more — something they’ve done an especially awful job of for the past several years. Heading into last season, they were nursing a recent record of 4-53. No team in the league has a longer postseason drought, which stands at 16 years and counting.

Now, they are all in on the turnaround, evidenced by their big move for Beckham.

“Just know and make it a given,” Kitchens said last month. “What I believe in my core is that [our goal] is to win the Super Bowl.”

Just when you think you can’t love the game of football even more …#WASvsCLE pic.twitter.com/vzeg5pC9UX

In truth, they don’t need to win a Super Bowl for the city of Cleveland to be really happy. The Cavaliers won the NBA title in 2015, and the battling Indians are highly competitive. Cleveland even celebrated wildly when local firefighter Stipe Miocic won and defended the UFC heavyweight title. But it is a football town. If the Browns can start to thrive, even a little bit, it will lift the energy in the whole place.

Warning here: Cleveland have had their hearts broken before. Big expectations have led to nothing, more times than they can count. But there is a genuine sense of optimism and the reality is this: even if the Browns end up not being great, they’re going to be relevant – and that makes them interesting for a change.