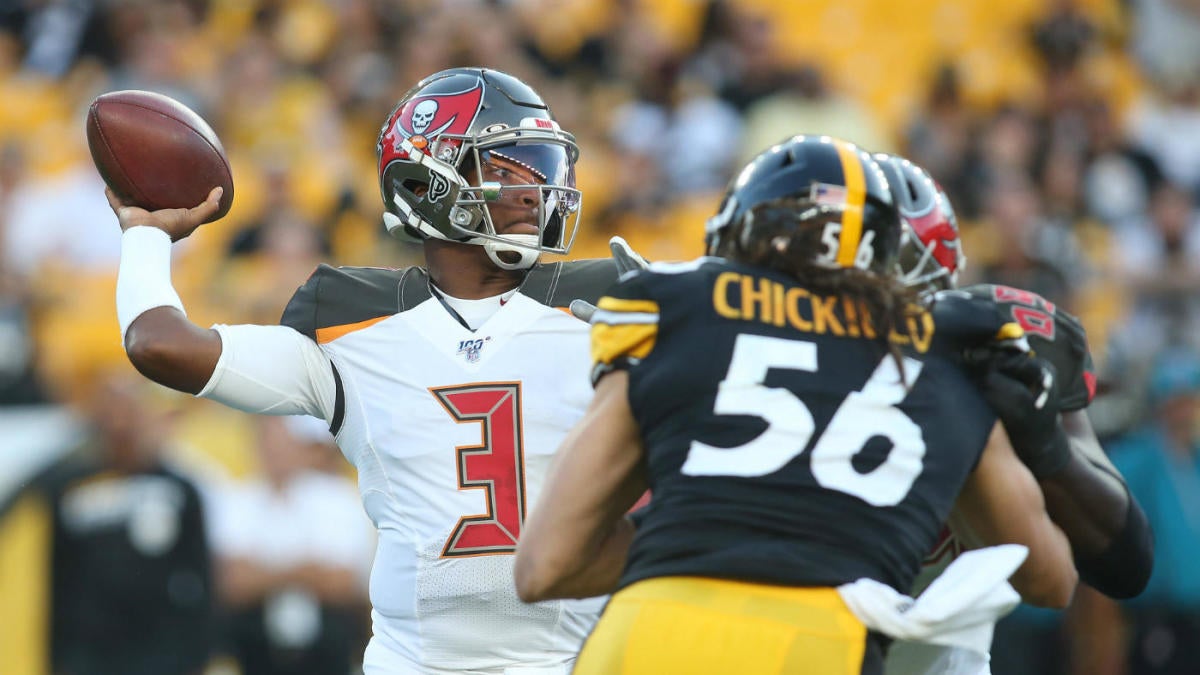 Antonio Brown may have stolen the NFL spotlight on Friday by reportedly declaring he’ll end his career if he isn’t allowed to wear his favorite helmet (seriously), but that doesn’t mean other people won’t be playing football to start the weekend.

Brown’s former team, the Pittsburgh Steelers, is up first on Friday night, kicking off the second round of Week 1 preseason action against another old friend in Bruce Arians, who will make his head coaching debut atop the Tampa Bay Buccaneers’ new staff. While neither side figures to play starters for much of the evening, the Bucs, in particular, have quite a few big names vying for good standing under their new boss — quarterback Jameis Winston chief among them. He’ll face a potentially tall task in whatever reps he gets vs. Pittsburgh, too, considering the Steelers’ defensive talent.

After Buccaneers vs. Steelers, the Minnesota Vikings will travel to New Orleans for a rematch of the 2009 NFC Championship Game and 2017 NFC divisional round, the first of which the Saints won and the second of which the Vikes claimed in stunning fashion — remember the “Minneapolis Miracle?” Kirk Cousins and Co. could be limited to one series in the Mercedes-Benz Superdome, but the matchup could serve as a preview of a future playoff matchup.

As Friday’s action unfolds, keep it locked right here at CBS Sports, where we’ll be providing updates and analysis from both games. Listed below is also a complete Week 1 schedule of the 2019 preseason. The Bucs-Steelers matchup will be nationally televised on NFL Network, but be sure to check local listings for other games. The rest will be available for streaming on fuboTV (try for free) or NFL Game Pass (out of market).

Rudolph making his case for Steelers’ No. 2 QB job

Josh Dobbs may have done his job and done it well on Friday, starting for Ben Roethlisberger to kick off the Steelers’ 2019 preseason and stake his claim on the backup quarterback job. But to suggest Dobbs wrapped up the No. 2 spot with his first-quarter showing would be to completely overlook the inspiring work of his competition, second-year man Mason Rudolph.

While Dobbs showed off his legs against the Buccaneers, picking up 44 yards on the ground, Rudolph dazzled through the air, making pinpoint throws and displaying perfect pocket presence on a pair of touchdowns to put the Steelers ahead 20-10.

With three preseason games still on tap, the battle for Big Ben’s backup spot is far from over. But if you’re the Steelers, just one year removed from moving up in the third round to take Rudolph (5 for 8, 91 yards, 2 TD), you’d probably be more than OK if the Oklahoma State product repeated his Friday night performance in the lead-up to the regular season and ran away with the job.

Cousins efficient out of the gate vs. Saints

It’s not going to silence any critics of his big-game performances, but Kirk Cousins’ hot start on Friday night vs. the New Orleans Saints offered a promising, efficient look at the quarterback, who’s entering his second season in Minnesota and first under full-time offensive coordinating by Kevin Stefanski. The big-money signal-caller went a perfect 4 for 4 on the Vikings’ opening series in New Orleans, putting nice touch on a 34-yard floater to Adam Thielen and finding rookie running back Alexander Mattison for a 1-yard touchdown pass to put Minnesota up 7-0.

Former Vikings QB Teddy Bridgewater wasn’t nearly as crisp out of the gate while starting for Drew Brees. While he was 11 for 13 closing in on halftime, the Saints backup also absorbed a pair of sacks while appearing to hold the ball too long, settling for two field goal drives and watching as Sean Mannion, Cousins’ relief, also put the Vikings in the end zone for a 14-6 second-quarter lead.

He played for less than a quarter, but Jameis Winston looked as comfortable as could be in his first official action under the guidance of new coach Bruce Arians on Friday, leading Tampa Bay on a 12-play, 81-yard touchdown drive to kick off his make-or-break season under center. Winston’s performance obviously carries all the caveats of starring in the preseason, but if you’re a Bucs fan, you couldn’t have asked for a much better, calmer showing, with Jameis finishing 5 of 6 for 40 yards and a TD to Chris Godwin.

Winston’s new backup, Blaine Gabbert, nearly put Pittsburgh on the board upon taking over at quarterback, throwing what could’ve easily been a pick-six by Steelers rookie Devin Bush, but Tampa also flashed some promise on the ground. Out-gaining the hosts nine first downs to one with about a minute remaining in the first quarter, the Bucs got a handful of early, effective cuts from running backs Peyton Barber and Ronald Jones, who combined for 36 yards in the opening 15 minutes.

Quarterback Josh Dobbs fought off Landry Jones for the right to back up Ben Roethlisberger last year, and he will have to do something similar this preseason. Mason Rudolph is ready to earn a spot on the active roster but is playing behind Dobbs vs. Tampa Bay. The former University of Tennessee star hooked up with second-year wideout James Washington for a huge 43-yard gain on his first throw, which got the Steelers out of the shadow of their own goalpost.

Washington is another player to watch this season for the Steelers, as he is sure to have a much larger role in the offense in 2019. He recorded just 16 receptions for 217 yards and one touchdown in his rookie season, but the Steelers are confident that he can break out now that he has some experience in this system. He sure looked like a starting wide receiver on this play.