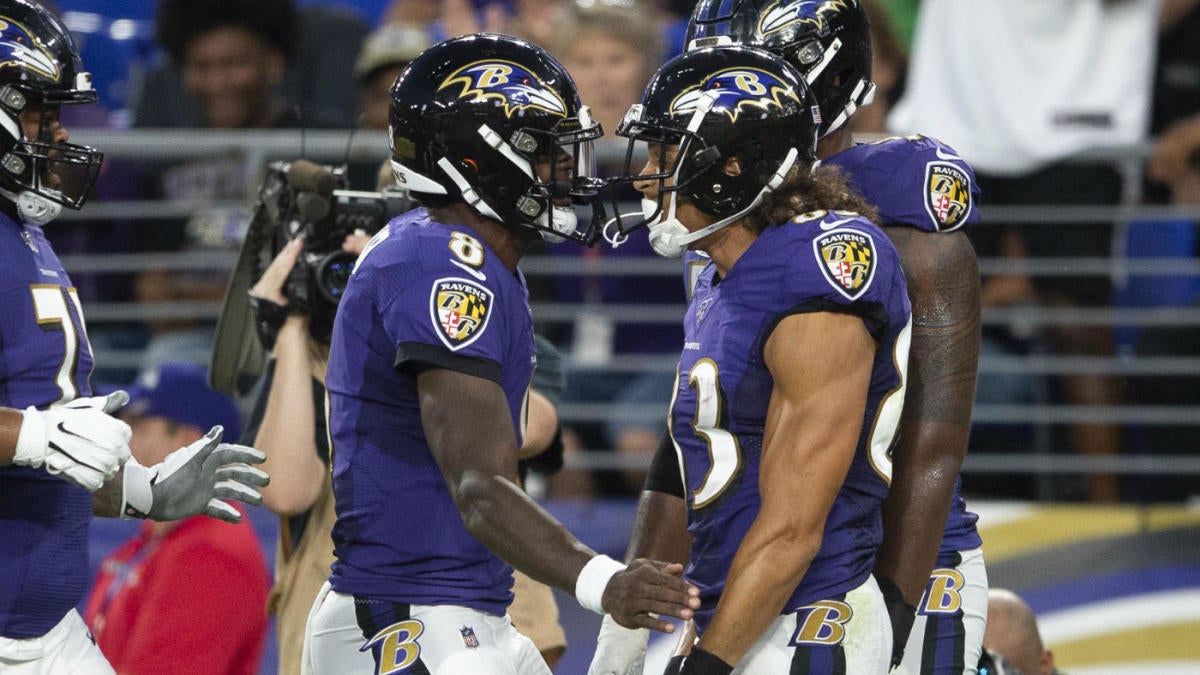 BALTIMORE – This wasn’t really the Baltimore Ravens offense. Lamar Jackson didn’t use his legs and wouldn’t think of running with the ball and no one was moving around the mesh point or getting creative with RPOs.

This was basic, vanilla, pocket football. And the second-year quarterback, in his first preseason as a starter, looked plenty comfortable and just fine. Jackson has had a strong training camp to this point and was economical and productive in his one quarter of work in his team’s 29-0 blowout win over Jacksonville Friday night. Of course, he wasn’t facing any of the Jaguars‘ ferocious veteran defenders, but as exhibition debuts go you couldn’t have asked for more from the young passer. This looks and feels much different than last summer.

“Yes, definitely, it was,” Jackson said. “I know I said it a million times last year, just coming in a rookie, it is a lot different. If you are like me, you’ve waited your whole life for this. But, this year was like I already did it, so I just have to perform and come out and win.”

Jackson threw his best pass of the evening on his first attempt, rolling out right and hitting Chris Moore down the sideline in perfect stride for a 30-yard gain that keyed a drive that ended in a long Justin Tucker field goal (Tucker, by the way, is always in peak regular-season form). Jackson operated well within the limited scope of this offense – trust me, it will be much more elaborate and voluminous when the games actually count – and he set up another drive with a lob to Moore as well, although the pass may have been intended for a tight end.

Jackson went 4-of-6 for 59 yards a touchdown; that score came on a screen to slot guy Willie Snead with him dancing in to the end zone after the short reception. Baltimore had a 10-0 lead and the rout was on. It was another incremental step to build on, with Jackson throwing a tighter spiral and displaying tighter footwork and more composure than at this time a year ago.

The Ravens were pleased by the debuts of some of their draft class, particularly the skill guys. Receiver Myles Boykin was a target-monster and used his size well at time to box out, had good range, and alertly reached the ball forward to extend a drive with a first down. He also made a nice catch on a fade for a touchdown that was negated by holding. “Boykin made a lot of plays,” Ravens coach John Harbaugh said. Running back Justice Hill showed quick hips and elusiveness both in the run game and catching short passes. Their top pick, receiver Marquise “Hollywood” Brown, missed all of the offseason and the start of camp with a foot injury and did not dress but worked out before the game.

Many Jags sit as Marrone has new approach

Jacksonville sat 32 players in all – over a third of the available roster, including a host of defensive starters. Top 2019 pick Josh Allen did dress, but overall it was difficult to asses the bottom of their roster as the Ravens dressed quite a few regulars. Jacksonville never crossed the 50 on offense and it was difficult to find many positives all around, as you might expect. Coach Doug Marrone noted “I had to change the philosophy and how I approach the preseason,” while trying to curb the injury woes from a year ago. He added: “We have to see what the depth is. Right now, it’s not good.”

Say a prayer for Jaguars backup quarterback Gardner Minshew. He was beaten and pummeled throughout the game literally from the opening series on. “Gardner was hit lot,” Marrone said on the understatement of the night. Ravens defensive coordinator Wink Martindale stacked the line and threw some aggressive blitzes and Minshew was crushed repeatedly, twice losing his helmet in a violent hit. With a backup line, he didn’t stand much of a chance. Marrone said the heavy pressure from the Ravens did not catch anyone off guard. “They did it last preseason, so it wasn’t anything we weren’t prepared for,” Marrone said.

With veteran RGIII out, rookie QB Trace McSorley got a lot of work and flashed his mobility and athleticism and moved the team well. “He did better than I did in my first game,” Jackson said. McSorley seemed at ease in the huddle and when he made his one big rookie mistake – an awful pick late in the first half to take his team out of field-goal range – he bounced back on the next drive. He could be a factor on special teams and perhaps in a Taysom Hill-type role, with his ability to pass from a running back or receiver position an interesting wrinkle to consider. “I thought Trace played well, with a lot of poise,” Harbaugh said.