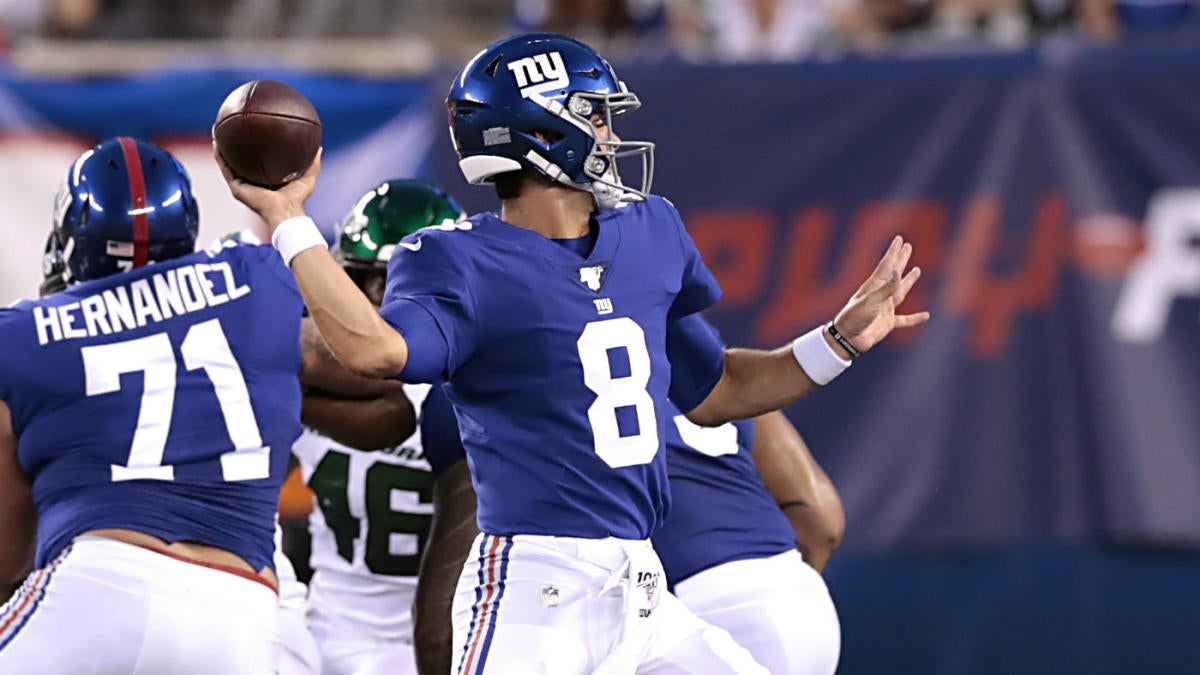 Daniel Jones was box-score perfect in his preseason debut for the New York Giants. A rain delay may have played a factor in head coach Pat Shurmur’s decision to give Jones only one offensive series during the team’s 31-22 victory over the New York Jets, but that’s all he needed to make a strong first impression on his Giants teammates.

“I’m impressed with everything,” Giants running back Wayne Gallman said after the game. “There’s not an actual word I’d put on it. But he’s gonna be a great one. He’s very poised, very smart — you can tell by his eyes, he comes ready to play and that’s something you like to see in your teammates.”

Gallman had the luxury of drawing the start and playing with Jones during his one offensive series. On his only possession of the night, Jones completed 5-of-5 pass attempts for 67 yards and a touchdown. He averaged 13.4 yards per pass and capped off the drive with a perfectly thrown 12-yard touchdown pass to wide receiver Bennie Fowler. Jones displayed pocket poise, anticipatory throwing skills, above-average ball placement, and velocity on his first possession with the Giants — four traits that were widely questioned by critics after the franchise decided to use the No. 6 overall pick in the 2019 NFL Draft on the former Duke quarterback.

Jones’ touchdown throw was a perfectly-placed “hole shot” as they call it at the NFL level — in other words, it was an NFL-caliber throw. Jones decided to get aggressive against a Cover-2 style defensive look by attacking the Corner-Flat route combination and throwing the corner route. Jones dropped the ball in a spot where Fowler didn’t even have to move his hands — perfectly, in the corner of the end zone.

“None of it surprised me,” Fowler said of Jones after the game. “He was poised, calm, confident. That’s the way he’s been since he got here in OTAs. I’m very happy for his success. It’s just the start.”

Shurmur made the decision before the game to give Jones a run with the Giants’ first-team starters on the offensive line. This was a calculated call with a look toward the future of Giants football. This was also the first time the Giants’ starting offensive linemen had an extended opportunity to play with Jones.

Jones’ presence in the huddle stood out most to second-year starting left guard Will Hernandez.

“The cool thing about Daniel Jones is, he came in there and he didn’t seem like a rookie quarterback to me,” Hernandez said after the game. “He was sure. Was loud. Was firm. Handled the huddle with certainty, all the assurance in the world.”

There is not a quarterback competition brewing for the Giants just yet, but if Jones continues to shine in training camp and the preseason, the pressure will mount for two-time Super Bowl MVP Eli Manning as he gets set to enter his age-39 season. For now, Jones will continue to focus on cleaning up the little things and preparing for his next chance at live game reps. The Giants host the Chicago Bears in their second preseason game next Friday and Jones is expected to get an extended run.