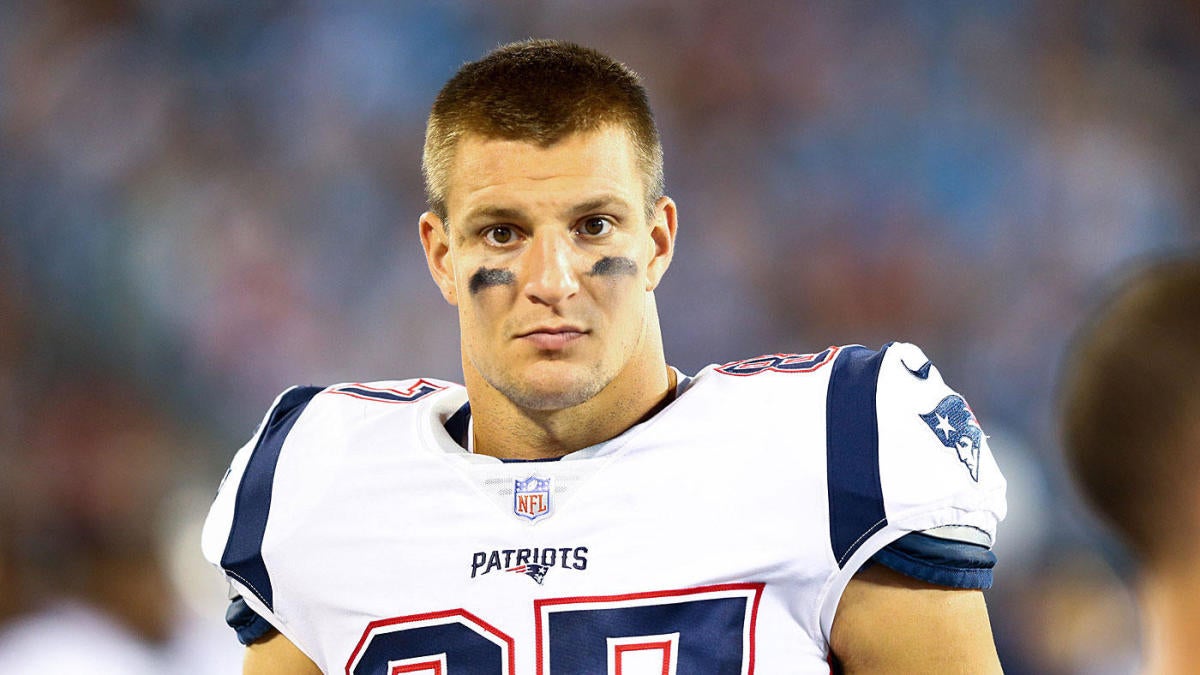 For a team that’s coming off a Super Bowl win, the Patriots sure are facing a lot of questions as they get ready to head into the 2019 season, and most of those questions are on the offensive side of the ball.

Can anyone replace Rob Gronkowski? Will someone besides Julian Edelman step up at receiver? Will Isaiah Wynn finally take over the starting left tackle job? Will anybody buy Tom Brady’s house?

For most teams in the NFL, having that many questions at that many key positions would probably mean that they’re about to be in for a disastrous year, but the Patriots aren’t most teams. If Bill Belchick has proven one thing over the past 20 years, it’s that he has the uncanny ability to adapt his game plans to his personnel, which is why he’s basically been able to build a winner no matter who he has on the roster.

With the Patriots facing questions at both tight end and wide receiver, it wouldn’t be surprising at all to see them run the ball more in 2019, which would actually be vintage Belichick. In today’s NFL, conventional wisdom says that you should throw the ball more to be successful on offense. Of course, Belichick laughs in the face of conventional wisdom, which is why the Patriots have been so good for so long.

Basically, the Patriots’ passing numbers could go down in 2019, but that won’t end up affecting the amount of success they have on the field during the regular season. With that in mind, let’s get to our five bold predictions, which includes two season predictions, two offensive predictions and one Gronk-related prediction.

This might not sound like a bold prediction, but it definitely qualifies, and that’s because the Patriots have only pulled off this feat one time during Bill Belichick’s 19 seasons in New England. Back in 2007, the Patriots were the NFL’s last remaining undefeated team during the regular season, and that’s because they never lost during the regular season. The team finished 16-0 and won two playoff games before the Giants torched their perfect season by beating them 17-14 in Super Bowl XLII (in 2015, the Patriots started 10-0, but they weren’t the NFL’s last remaining undefeated team because the Panthers started 14-0).

If the Patriots can beat the Steelers in the opener (they lost to Pittsburgh last season) and if they can top the Dolphins on the road in Week 2 (they’re just 1-5 in Miami over the past six seasons), it wouldn’t be crazy to see them hit their bye week at 9-0. If that happens, there’s a good chance they’ll be the final undefeated team standing.

Of course, there is one downside to being the NFL’s final undefeated team during the regular season: That team almost never wins the Super Bowl, which takes us to our next bold prediction.

There’s a 90 percent chance that every Patriots fan alive will be able to rub this prediction in my face by the end of the season, but I’m going to make it anyway.

Here’s the thing: when the 2019 season starts, the Patriots will be gunning to get to the Super Bowl for a fourth straight season, which is something that’s nearly impossible to do in the NFL. In the 53 years that the Super Bowl has existed, only one team has ever managed to make it to the NFL’s biggest game in four straight seasons, but I’m not going to mention that team’s name because I don’t want to lose everyone in Buffalo after I just predicted the Patriots would be home in February.

This feels like the year the Patriots finally take a tiny step back. To be clear, I think they’ll make the playoffs and possibly even the AFC Championship Game, I just don’t seem them getting back to the Super Bowl.

The biggest problem for the Patriots is the loss of Gronk, who might be the first person during Belichick’s tenure who left the team before the Patriots coach could get rid of him. During Belichick’s 19 years as coach, we’ve seen him dump multiple veterans who were either past their prime or in line to get a huge contract that New England didn’t want to pay out. Sometimes Belichick trades them, sometime he cuts them and sometimes he lets them walk in free agency, but no matter how it happens, it always happens. Trey Flowers, Chandler Jones, Logan Mankins, Mike Vrabel, Richard Seymour, Randy Moss, Wes Welker, Lawyer Milloy and Adam Vinatieri are just a few guys who have gone through this situation.

With Gronk, Belichick definitely wasn’t ready to move on, which tells you how much the tight end still meant to the team’s offense. Belichick spent nearly the entire offseason trying to find tight ends who might be able to help replace Gronk, but there doesn’t really seem to be anyone on the roster who fits the mold. Basically, this feels like the year where the Patriots offense finally takes a small step back, which will be just enough to keep them from getting to their fourth straight Super Bowl.

After leading the NFL in passing yards just two years ago, the prediction here is that Brady doesn’t even crack the 4,000-yard mark in 2019.

Although I fully expect Brady to have a successful season, I don’t think his passing numbers will be all that high due to the design of the Patriots offense. If the Patriots offense is lacking one thing this year, it’s pass-catchers. For one, they still don’t have an adequate replacement for Gronk, and they also don’t really have any proven receivers behind Julian Edelman, although Belichick has spent the entire offseason trying to find both tight ends and receivers.

Of course, there is one position where the Patriots do have plenty of depth, and that’s at running back. Although the rest of the NFL is falling in love with the passing game, Belichick has always been known for doing his own thing, and it’s almost like he’s single-handedly trying to prove that you can still win with a strong running game. In the past two years alone, the Patriots have selected a running back high in the draft. In 2018, they took Sony Michel with a first-round pick and then followed that up in 2019 by taking Damien Harris in the third round. Besides those two, the Patriots also have James White, Rex Burkhead and James Develin. Basically, the Patriots are loaded at running back, and they know how to utilize each guy.

Brady will probably complete 65 percent or more of his passes in 2019 and he’ll probably throw somewhere around 30 touchdowns, he just won’t be hitting the 4,000-yard mark because New England doesn’t need him to. The Patriots can still be good even if Brady doesn’t throw for 4,000 yards. The last time Brady played a full season and didn’t hit the 4,000-yard mark came in 2010 and the Patriots still went 14-2. As a matter of fact, of the four times that the Patriots have won 14 or more games in a season during Brady’s career, he finished three of those seasons with under 4,000 passing yards.

During the 2018 season, Michel missed three weeks of playing time and still almost managed to crack 1,000 yards rushing. In 13 games as a rookie, Michel rushed for 930 yards, which ranked 15th overall in the NFL and seventh in the AFC.

If the Patriots proved one thing during Michel’s rookie year, it’s that they’re not afraid to make him their workhorse. The Patriots basically rode Michel’s legs to the Super Bowl last season. In New England’s divisional win over the Chargers, Michel rushed for 129 yards and three touchdowns. The next week in the AFC title game, Michel rushed for 113 yards and two touchdowns. Michel also scored the only touchdown of the game in the Patriots’ Super Bowl win over the Rams.

If you include that 13-3 Super Bowl win, Michel averaged 112 yards and two touchdowns per game in the playoffs while also possibly giving us a preview of what the Patriots offense might look like this year. The big advantage Michel — and the Patriots’ running game overall — has over other teams is that you can’t stack the box to stop the Patriots on the ground. If you do that, Tom Brady will simply pick you apart and the Patriots will get the last laugh like they always do.

Due to the depth the Patriots have at running back, Michel may not be able to reach the 1,400 or 1,500 yards that it might take to lead the NFL in rushing, but leading the AFC definitely seems like a realistic goal. In 2018, the conference’s leading rusher was Joe Mixon, who finished with 1,168 yards. Michel averaged 71.6 yards per game last year, which would have put him at 1,146 if he had played all 16 games.

5. Gronk comes out of retirement

Ever since Rob Gronkowski announced his retirement back in March, there’s been non-stop speculation about whether or not he’s actually going to stay retired. Gronk seems to like this speculation, which is probably why he keeps playing games with us every time someone asks him if he’s going to come out of retirement.

Although Gronk definitely seems to be enjoying retirement right now, that could change once the season starts. The good news for Gronk is that the Patriots’ schedule actually sets up well for him to come out of retirement. The Patriots have a bye in Week 10, which means Gronk could theoretically skip the first nine weeks of the season and then return in November just in time for the stretch run. The upside of going this route is that it would give Gronk’s body a full seven months to heal before taking any hits. Also, since the Patriots would be coming off a bye, Gronk would have two full weeks to re-acclimate himself with the offense.

Oh, and let’s not forget that Gronk’s agent, Drew Rosenhaus, casually pointed out in March that the tight end would probably consider a return if Brady personally called him and asked him to come back.

So what does of all of this mean?

According to Pro Football Talk, it apparently means that there’s a 40 percent chance Gronk will return this year. So you’re telling me there’s a chance?

The prediction here is that Gronk comes back at some point after Week 8.