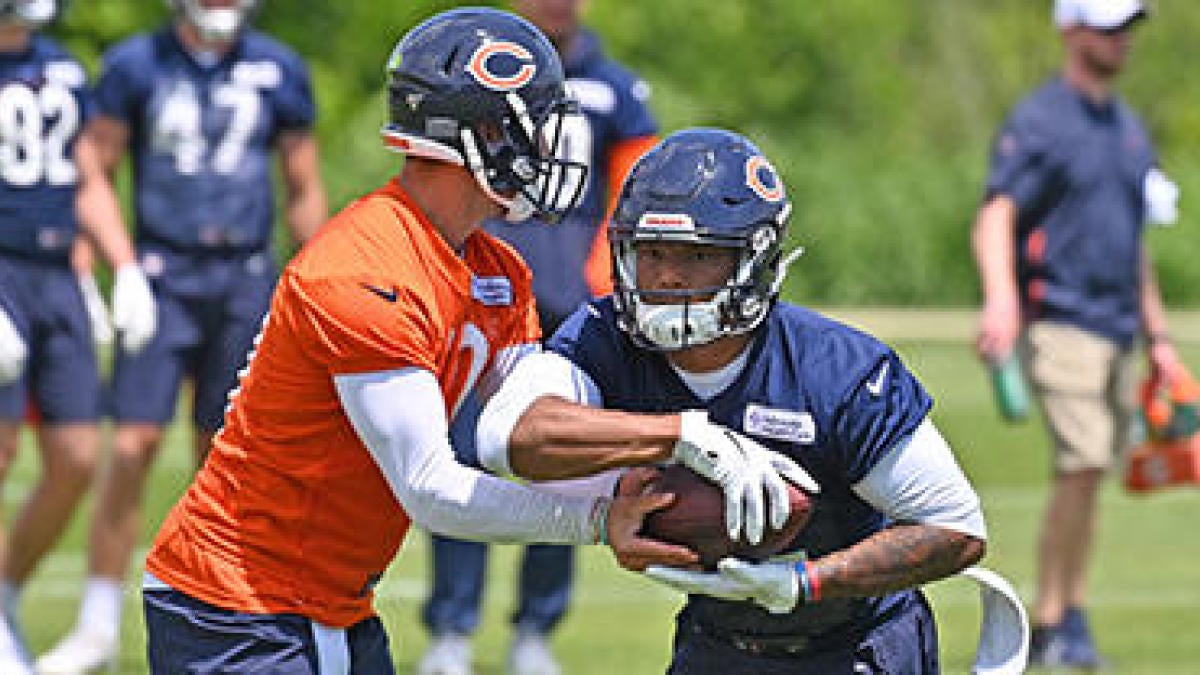 The Chicago Bears’ offseason revolved around a kicking competition, one that centered around kickers coming into minicamp and attempting 43-yard field goals … the distance Cody Parkey’s double doink was heard around the world (and knocked the Bears out of the playoffs).

Parkey was released by the Bears, who went on a national search to find their next kicker. The Bears are down to two candidates, Eddy Pineiro and Elliott Fry. If the Bears can figure out who will make kicks consistently for them, they could state their case as front-runners to represent the NFC in the Super Bowl. Chicago is bringing back the No. 1 ranked defense and Mitchell Trubisky is expected to make even more strides in Year 2 under Matt Nagy’s offense.

No surprise Tarik Cohen is the first-team running back, especially after the Bears traded Jordan Howard to the Philadelphia Eagles. Mike Davis was the third-down back for the Seattle Seahawks last year, but Montgomery will be pushing for second-team reps in the preseason. The Bears view Montgomery as the power back to replace Howard, a strong compliment to Cohen.

Adam Shaheen is the starting Y tight end when the Bears go in “12 personnel” while Trey Burton will play at the line. To nobody’s shock, Trubisky is the starting quarterback and Chase Daniel is the top backup.

The Bears boast a strong right side of the offensive line with Kyle Long and Bobby Massie. Ted Larsen provides solid depth at multiple positions, but injuries could play a factor in how good the Bears offensive line can be.

The Bears are going with Bilal Nichols starting opposite Akiem Hicks as the other edge rusher in Chicago’s 3-4 defense. Nichols surprised many in Chicago in his rookie season with 20 tackles and 3.5 sacks as a fifth-round pick out of Delaware, ready to showcase more production with more snaps.

Chicago did lose Adrian Amos in free agency and signed HaHa Clinton-Dix to replace him, but Deon Bush has pushed him throughout the first two weeks of camp. Bush had an impressive first week of camp as the Bears had Eddie Jackson line up in the box while Bush played center field in single-high coverage. Clinton-Dix will need more practices to become accustomed to that role, but he’ll have the majority of training camp and four preseason games to get ready for the season.That battle will be something to keep an eye on for the NFL‘s top-ranked defense from last year.

The battle to watch is obvious. Who is going to be the Bears kicker? Chicago listed both Fry and Pineiro as the first-team kickers, making the competition even more intriguing. Pineiro has gone 32-for-36 (88.9 percent) through camp, making multiple kicks over 60 yards. Fry is 34-for-40 (85 percent), making a 60-yard kick at the conclusion of a practice session. Fry was 15-for-15 in the Alliance of American Football, his longest being 47 yards.

If the Bears go on actual game experience, Fry could get the nod … but Pineiro has been impressive.