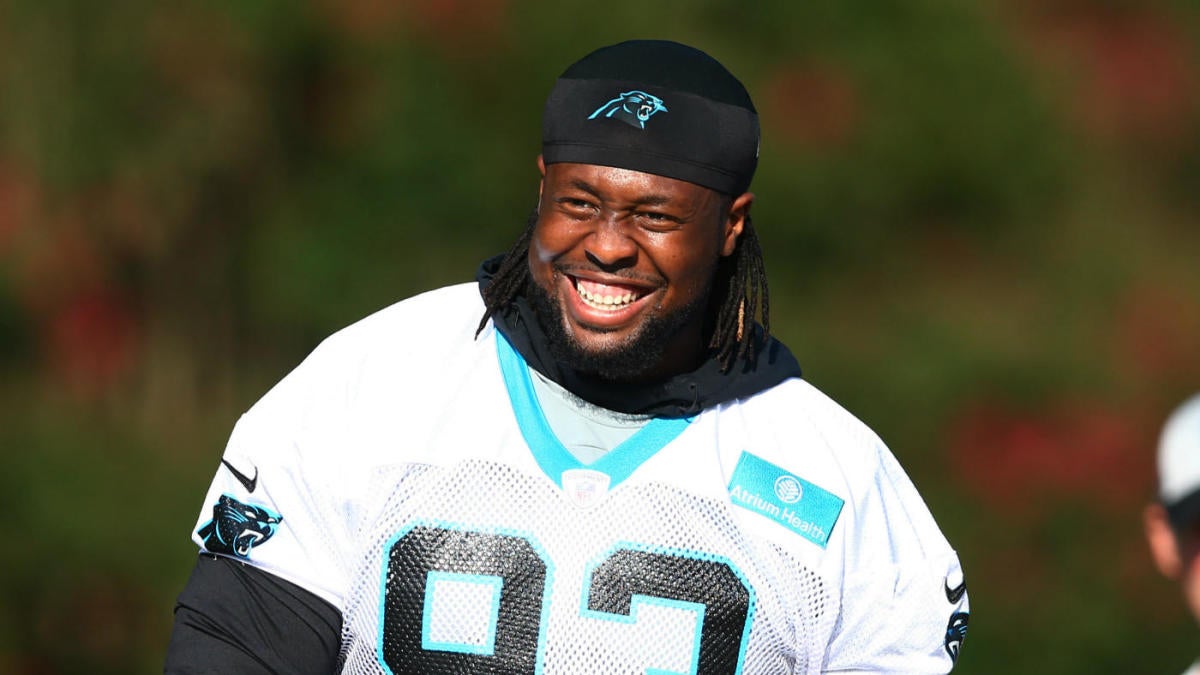 SPARTANBURG, SC — The two players were approaching the camera at literally the same time, with the Panthers‘ tough practice under a scalding sun just completed, and the smaller, younger receiver was already deferring a bit to the massive, 10-year defensive lineman.

There was only one camera, and only one person set to interview them (me), as Gerald McCoy, a former top-five pick who just signed with the Panthers a few weeks ago, and D.J. Moore, a receiver entering his second season in the NFL, made their way over from the practice field. Instinctively, we thanked both men and then went to begin putting a microphone on McCoy when the veteran intervened.

“D.J. practiced today and I had a day off,” McCoy explained. “That man has things to do. He’s going to go first.”

And with that, McCoy hung back with a member of the public relations staff while we conducted the interview with Moore.

It was a simple, natural gesture, but not one McCoy had to make. Seniority. Other side of the ball. All of that stuff. But it’s a small portal into how the Pro Bowler conducts himself, and another small indicator of how he is fitting in with a new team having spent his entire career before in Tampa.

McCoy made sure to interact with virtually every member of the defense as well during stretching, despite not taking part in drills on Tuesday, working on little swim moves and sack tactics as the other players ran from sideline to sideline and, in his own unassuming way, making his presence felt.

“I’m just me,” McCoy said of his approach and easy interactions with his new teammates. “I don’t like to be a chameleon to where you switch and change with the group you are with. But I also do like to call myself a chameleon, meaning I can blend in with any group.

“But I have also said in previous interviews, when we went to that lunch (during his free agent visit to Carolina) I blended right in with these guys. I fit right in, and with the camaraderie we built, Immediately I knew I could be on this team.”

McCoy is raving about head coach Ron Rivera — “They definitely take care of their veterans here; I know I made the right decision” — and is primed for a huge season. The Panthers prioritized bolstering a limp pass rush in the offseason through free agency and the draft, and his versatility is going to be a hallmark of the rebuilt line. McCoy being on a one-year prove-it deal, given his pedigree, only makes me more confident that he is going to make a substantial difference in a division where passing is king and top quarterbacks are everywhere.

“The reason they brought me here is I’m a guy no matter whether you put me (along the defensive line) at the 5, ,4, 3 or the 1, it don’t matter,” McCoy said. “Give me a pair of shoulder pads and a helmet and some cleats, and put me on grass, and we’ll make it work.”

It already looks like the perfect fit. This is a playoff team to me, after the quietly strong offseason that general manager Marty Hurney put together. A division title wouldn’t shock me at all.

So much it seems is being made of Carolina’s switch to a 3-4 defense from a 4-3, but the reality is the prevalence of spread formations and the fact that Drew Brees and Matt Ryan are in the NFC South, and now pass-happy Bruce Arians is in Tampa, means nickel defense will be imperative. Rivera told me his team was in sub-packages about 59 percent of the time last year “or something crazy like that,” and expects it to rise this year.

“We have to make sure that we an handle what they do,” Rivera said, adding that it’s more likely these days his team is in its base defense “once every five plays.”

The renewed pass rush will help, but teams are going to spread these guys out early and test the depth of a the secondary. Everyone here seems to know it.

Good vibes for the new Cam

Rivera surprised some of us by saying on Monday that all four QBs on the roster would play in Thursday’s preseason debut, but he amended that on Tuesday. Cam Newton and All-Pro linebacker Luke Kuechly won’t play, and I doubt we see much of Newton at all in the preseason after missing all spring recovering from offseason shoulder surgery. Rivera said he was sitting Newton “just to be careful,” and there have been no setbacks or issues with the shoulder, though additional rest for Newton is built in for the rest of camp.

I really liked what I saw of Newton with a more compact delivery without as big a wind-up. He was constantly perfecting it, even between drills throwing to anyone who would catch him. He is driving the ball with a right spiral, and yes, he made one poor red-zone pick on Tuesday that had him banging himself on the head, but he was threading passes too. “It’s all good vibes right now,” is how Moore put it.

McCoy spent his career to this point chasing Newton around. But watching the uber-athletic quarterback practice has been eye-opening for him, because rarely if ever do you see the quarterback outside the pocket on these field.

“I’ve been quoted as saying that he is the best escape artist we have in this league,” McCoy said. “And you watch him in practice and he don’t run at all. So for him to be as good at getting away from people as he is, it’s incredible that he does it, because he doesn’t work on it at practice. He is truly working on being a pocket passer … Zone reads and all that other stuff, but he really wants to be a pocket passer.”