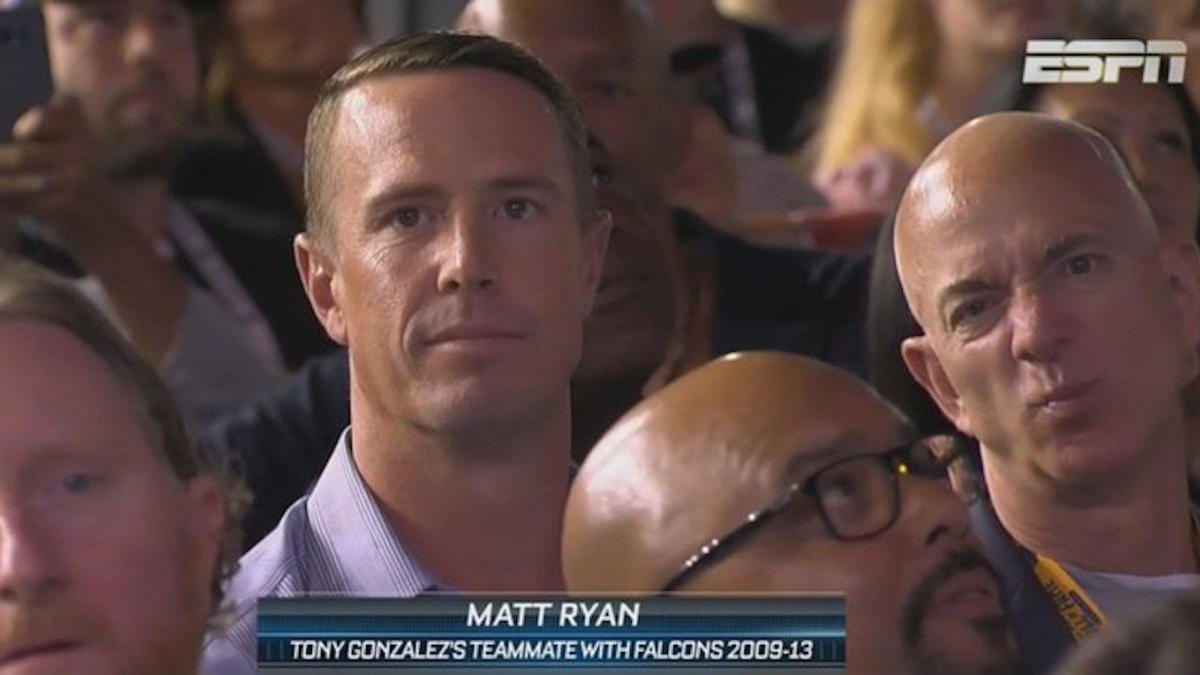 During the final speech of the night at the Pro Football Hall of Fame induction ceremony on Saturday, some people thought they were going crazy, and that’s because they thought they had seen Amazon founder Jeff Bezos on TV sitting next to Matt Ryan.

Of course, those people aren’t crazy, because they did see Bezos.

After Tony Gonzalez thanked Ryan during his speech, the camera panned over to the Falcons quarterback, who was sitting next to the founder of Amazon, which raised a lot of questions on Twitter.

That’s a lot of questions, so let’s go ahead and answer them all here. First of all, that was definitely Bezos, as you can see in the very clear screen grab below.

So why was Bezos in attendance?

It turns out the world’s richest man was in Canton to support his girlfriend, Lauren Sanchez, who was in Canton to support Tony Gonzalez. Sanchez and Gonzalez have a history together that dates back nearly 20 years when the two were once seriously dating. Although the relationship between Sanchez and Gonzalez ended in the early 2000s, the two do have one child together, an 18-year-old name Nikko, who was also in attendance on Saturday (If Bezos and Sanchez get were to get married, that means Nikko’s dad would be Tony Gonzalez, his step dad would be Bezos, and he also has a famous godfather: Kevin Lockett, the father of Seahawks receiver Tyler Lockett).

According to the New York Post, Bezos decided to skip a business trip to Italy so that he could meet Sanchez’s parents over the weekend before flying with her family to the Hall of Fame ceremonies. During the ceremony, Bezos was sitting with a group that included Gonzalez’s family and of course, that was also the reserved area where Ryan just happened to be sitting.

Bezos has been dating Sanchez since at least February when he went through a very high-profile divorce.

Of course, Bezos also has some NFL ties of his own. For one, Amazon just spent $130 million to purchase the streaming rights to “Thursday Night Football” in a deal that runs through the 2019 season. Also, it’s probably worth noting that Cowboys owner Jerry Jones would love to see Bezos become an NFL owner one day. During an interview in October, Jones said he would personally recruit Bezos, who’s worth well north of $100 billion.

“Someone like that,” Jones said of Bezos, “I’d carry him piggyback to get him to the NFL.”

Jones was actually in Canton on Saturday, but there’s no word on if he was able to convince Bezos to buy an NFL team. For a full recap of everything that happened in Canton over the weekend, be sure to click here.