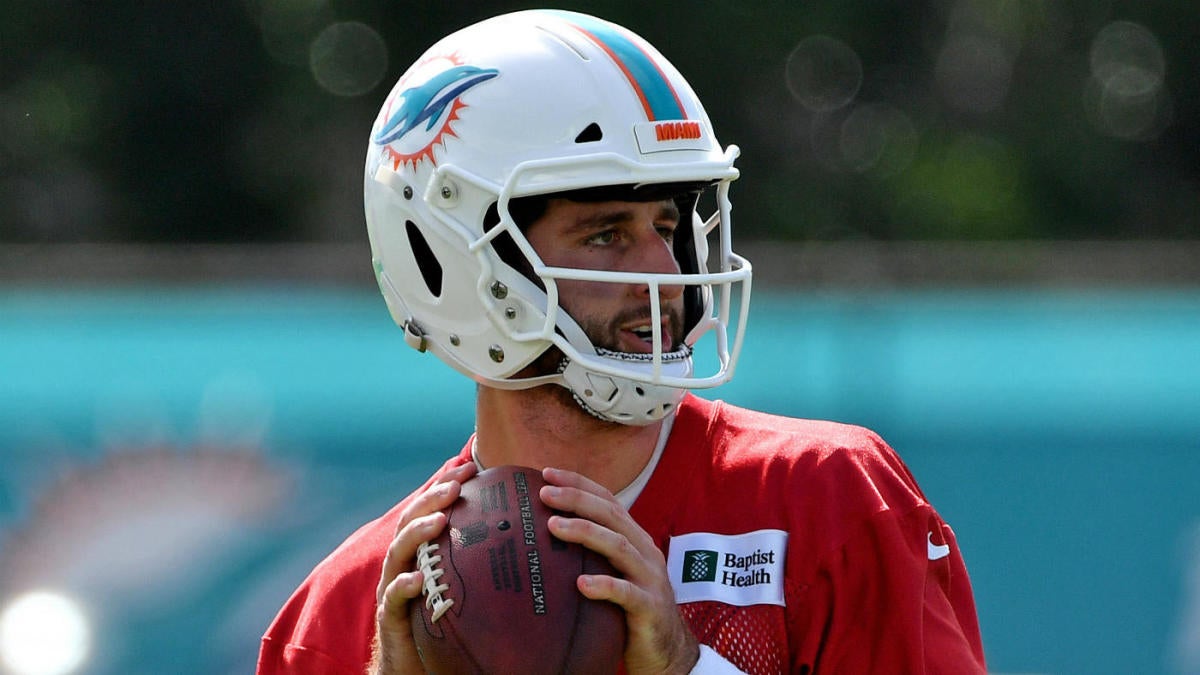 Before this year, the only people who ever used the words “Dolphins” and “tank” in the same sentence were employees at Sea World, but that changed this offseason due mostly to the fact that everyone is now under the impression that the Dolphins are going to tank away their 2019 season.

Although Dolphins general manager Chris Grier has insisted that the team won’t be tanking this season, I’m not sure we can actually believe him, because that’s exactly what you would say if you were going to tank.

That being said, I actually believe Grier and I don’t think the Dolphins will be tanking at all this year. For one, if the Dolphins really wanted to tank, they would have signed Christian Hackenberg this offseason and immediately named him the starting quarterback for the entire season, but they didn’t do that. Instead, they brought in Ryan Fitzpatrick, a quarterback who somehow manages to win multiple games every year no matter how bad the team is around him. Fitzpatrick has won at least four games in every season he’s played in since 2008.

Of course, the twist here is that Fitzpatrick might not even be the Dolphins’ starter this year and that’s because there’s a good chance that Josh Rosen could end up winning the quarterback job after being traded from Arizona to Miami in April.

With that in mind, let’s get to the bold predictions, starting with one about Rosen.

The Dolphins might not make the playoffs in 2019, but Rosen will likely chalk it up as a successful season if he can win more games than Murray and that’s exactly what I’m predicting here. The thing about Rosen is that during his rookie year in Arizona, it was hard to tell if he was actually any good or not and that’s mostly because he was regularly getting destroyed while playing behind one of the worst offensive lines in football.

Here is one example of Rosen getting killed last season.

(Note: This is the same offensive line that Murray is going to have to play behind this year).

Although the Dolphins’ line is also a disaster — remember, this is the team that fired their offensive line coach five months into his stint as offensive line coach — Rosen does now have the advantage of having one year of experience under his belt, which can go a long way when you’re playing behind a bad offensive line. Rosen should be better at identifying blitzes and finding his hot reads, which should cut down on sacks and make him a better all-around quarterback. Rosen also has just enough offensive tools to get the Dolphins to five or six wins and that should be all he needs to beat out Murray, who will be playing in a much tougher division.

2. Dolphins beat every AFC East team at least once

On the surface, this might sound like a crazy prediction, but it’s actually very doable. To pull this off, the Dolphins would have to pick up at least one win against the Jets, Bills and Patriots. Surprisingly, beating New England might be the most plausible thing on this list. For one, the Dolphins have dominated the Patriots at home over the past few years. Since 2013, Miami has gone 5-1 at home against New England. Let’s not forget that new Dolphins coach Brian Flores was a Patriots assistant last season and is very familiar with how Bill Belichick prepares for games. Belichick has struggled against former players and assistants, and if you need proof, just look at last year, when he lost to both Mike Vrabel (Titans) and Matt Patricia (Lions) in the two games that ended up being New England’s two worse losses of the season (The Titans beat the Patriots 34-10 while the Lions beat New England 26-10).

With the other two teams, Flores is familiar with everything they do and that’s because he coached against each team twice last season as a member the Patriots’ staff. The Dolphins have also been dominating the Jets lately, going 5-1 against them over the past three seasons.

3. Kalen Ballage finishes in top-10 in the NFL in yards from scrimmage

During his rookie season last year, Ballage was basically buried on the depth chart — behind guys like Kenyan Drake, Frank Gore and Brandon Bolden — but despite that, the fourth-round pick was still able to shine when he was on the field. In just 12 games, Ballage averaged an impressive 5.3 yards per rush on 36 carries while also catching nine passes for 56 yards.

With Bolden and Gore now out of the picture, Ballage has a legitimate shot to win the starting running back spot. The second-year back has been impressing everyone in training camp, including running backs coach Eric Studesville.

“He comes out here knowing what to do,” Studesville recently said of Ballage, via the team’s official website. “He knew what to do last year too, it’s just a matter of getting opportunities to sometimes show what you can do. The timing of it is different all of the time for different players. But he continues to push himself. He’s passionate about it, he wants to be really good and he works like that.”

At the rate things are going, it wouldn’t be surprising to see Ballage win the job of feature back over Drake, and if that happens, there’s a good chance the 23-year-old will put up some big numbers. Last year, Drake totaled 1,012 yards from scrimmage (535 rushing yards, 477 receiving yards) and there’s no doubt that Ballage is talented enough to pass those numbers. Of course, passing those numbers wouldn’t necessarily put Ballage in the top 10; to do that, he’ll probably need 1,400 to 1,500 yards from scrimmage. The bold prediction here is that Ballage pulls that off and cracks the top 10 for total yards.

First, I should start here by pointing out that the Dolphins gave up a total of 433 points in 2018. If you’re wondering how bad that was, it marked just the second time since 1990 that the Dolphins surrendered 400 points or more in a season.

The good news for the Dolphins is that if anyone can turn those numbers around, it’s Flores, who played a key coaching role on the Patriots defense last season and will be hoping to bring that same kind of success to South Beach (Flores helped design the scheme that shut down the Rams offense in Super Bowl LIII). Now that he’s in Miami, Flores plans on using a hybrid-type defense that will have the Dolphins playing both a 3-4 base defense and a 4-3 at times. The Dolphins already have a talented secondary, so the unit that will get the biggest boost from Flores’ scheme is the front seven.

Although Miami doesn’t have guys like Cameron Wake, Andre Branch or Robert Quinn anymore, it did get younger and arguably faster with the guys who are replacing those three. Last year, the team had an offensive-minded coach in Adam Gase, but this year, they have the defensive-minded coach in Flores and it won’t be shocking at all to see him turn the Dolphins’ defense around.

If you didn’t follow the Dolphins last season, you may not have known that they had one of the best ball-hawking secondaries in the NFL. The undisputed leader of that secondary is cornerback Xavien Howard, who tied for the NFL lead in interceptions last year (seven), which led to him being rewarded with the largest cornerback contract in NFL history. Including Howard, the Dolphins had five players who racked up two or more interceptions in 2018. Overall, Miami picked off a total of 21 passes, which ranked second in the NFL behind only the Bears.

That’s where Flores comes in. For one, the new Dolphins coach has already brought in two of his former players from New England: Eric Rowe and Jomal Wiltz. Rowe could end up starting opposite Howard at corner and there’s a good chance that Wiltz will also see some playing time.

The Dolphins also have the ultimate wild card player in their secondary in the form of Minkah Fitzpatrick. The 2018 first-round pick can play basically anywhere and it sounds like Flores plans on taking advantage of that.

“It may look like he’s playing cornerback, he’s playing safety, he could be playing linebacker,” Flores said in May, via the Miami Herald. “It depends. I’ll know what he’s doing. You guys probably won’t.”

After an impressive 2018 season, the Dolphins secondary is one of the few units on the team that definitely got better in 2019 and that’s why they’re going to lead the NFL in interceptions this year. It will definitely also help that they get to play eight games against quarterbacks who threw 12 or more interceptions in 2018.