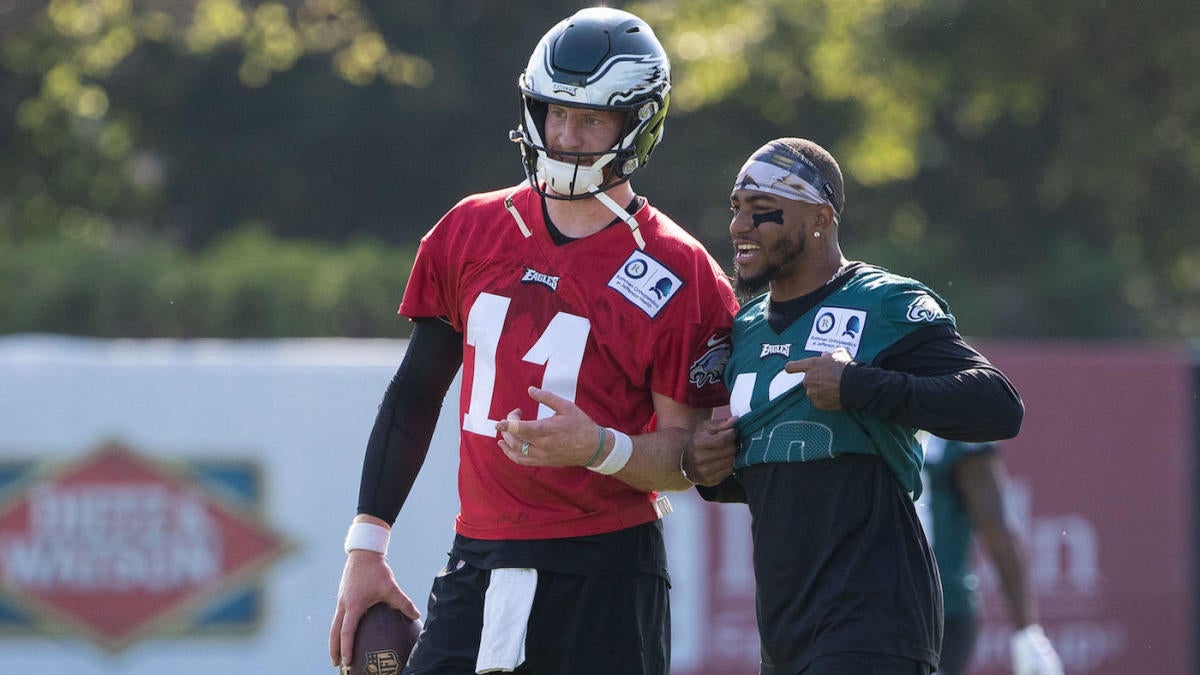 Carson Wentz hasn’t played a preseason game in two years, and the wait to play August football may be a bit longer for the Philadelphia Eagles‘ franchise quarterback. At the conclusion of Tuesday’s training camp practice, head coach Doug Pederson revealed he’s still undecided if Wentz will play in the Eagles’ preseason opener against the Tennessee Titans Thursday.

Wentz is 100 percent healthy from his ACL and LCL injury suffered 20 months ago and the spinal compression fracture in his back that ended his season last year, but the Eagles want to be cautious with their franchise quarterback with the season just under five weeks away.

“I have not still. We are working through that,” Pederson said on Wentz’s status. “We have a personnel meeting later today so we are still working through a bunch of stuff. We have a lot of bodies we want to see in this game so we haven’t made a determination yet.”

Pederson also remained mum on many of his starters for Thursday night’s game. Jason Peters typically doesn’t see much preseason action, but Pederson is undetermined if the left tackle will see snaps Thursday. If Peters doesn’t play, first-round pick Andre Dillard will play the majority of the snaps at left tackle. Dillard is the heir apparent to Peters at the position.

Pederson is also undecided on if wide receiver DeSean Jackson will play in the preseason opener. If Wentz plays, there’s a good chance Jackson could be on the field to get some game reps with Wentz.

“Yeah, that’s the fine line with all your starters or the guys you project for the opening day roster,” Pederson said. “You know, but again, someone who has not worked with Carson and if it’s an opportunity, great. These are things we’re going to work through and we’ll find out Thursday.”

The Eagles’ first-team starters have been limited in the first preseason game in the three previous years under Pederson. They played 13 snaps in Pederson’s first year (2016), 15 in Year 2 and just three last year. Pederson isn’t giving away any plans for Thursday, using this week’s practices as a barometer for what he wants to do.

“You look around at other teams and what other teams have done in the preseason, I take all that information in,” Pederson said. ” I look at how our team practices during the week. Our starters, they get most of the reps in practice. I’ve got to look at all that have and that’s why I haven’t really made a decision yet. Outside of the guys that are nicked and hurt and won’t play.

“But there’s a fine line between how much rest and how much push, and so that’s the thing we’re working through right now. But I’m taking all that into consideration going into this first game.”

If the Eagles do decide to play Wentz (even if it’s just a few snaps), Pederson wants his quarterback to see the valuable game reps that come with the preseason. Wentz was still rehabbing from ACL and LCL surgery last preseason, not being able to participate in any games and was unavailable until Week 3 of the regular season.

This year, the Eagles can determine how valuable game reps are for Wentz.

“Obviously, for, is that it’s been a while before he has been on the field and we want to get him that feel of being back on the grass again in a competitive live situation,” Pederson said. “Obviously, the reason for holding him is to still evaluate Nate [Sudfeld] and some of the other quarterbacks with Cody [Kessler] and Clayton [Thorson]. Those are the things we are working through and we will let you know as soon as we get the answers.”