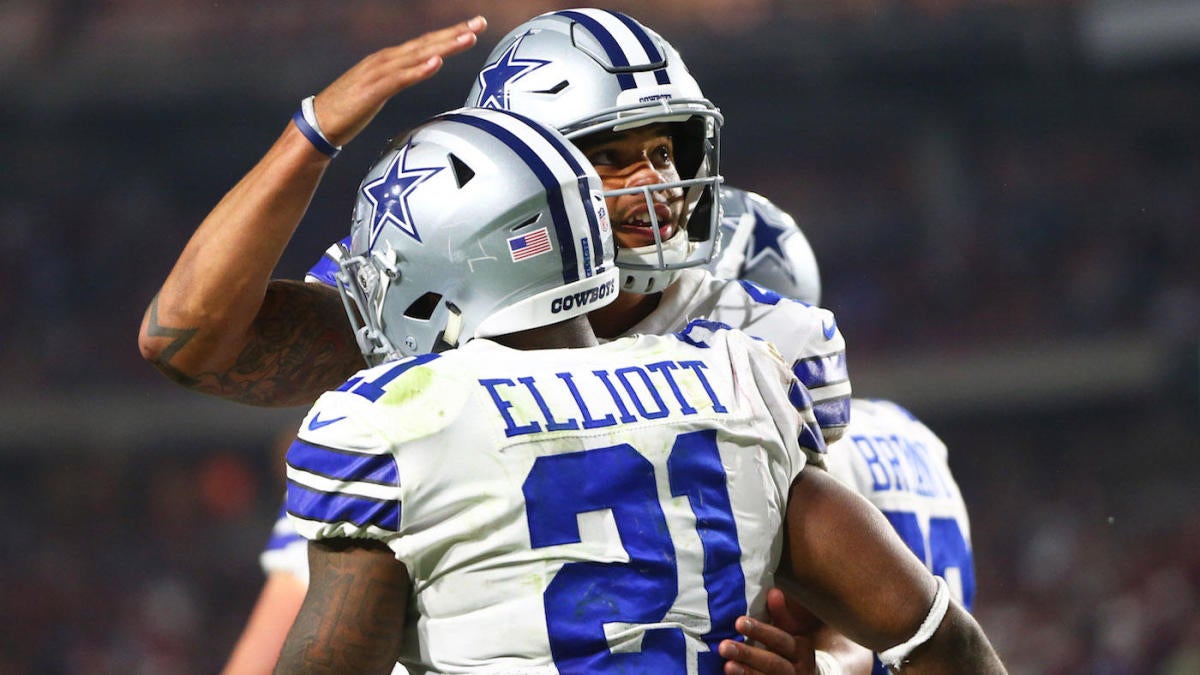 The money is on the table, and there’s a lot of it, but it may not be enough.

It’s common knowledge at this point that while some teams around the NFL are working feverishly to get one or two of their top talents inked to a contract extension, the Dallas Cowboys are in the middle of three separate negotiations that also happen to involve the most important players on their offense, and arguably the roster altogether. They’ve been working on finally nailing down an extension on quarterback Dak Prescott and wide receiver Amari Cooper since late April — when they successfully inked defensive end DeMarcus Lawrence to a historic five-year, $105 million deal following what became wildly contentious talks — with neither Prescott nor Cooper being in a rush to sign.

Both were/are playing a market that continues to drive their price higher, and then came the curveball that is running back Ezekiel Elliott. The two-time rushing champ is currently under contract through the 2020 season by virtue of the team exercising his fifth-year option, and that gave the club what they thought was until next spring to begin talks on a longterm deal. Elliott, who would like to lock down his financial security now versus later, and after another season or more of being asked to carry the offense at a position with a short shelf life, is now holding out of training camp until his new deal is done.

The Cowboys have made it clear they want to keep all three of their franchise players happy and in tow, and a source confirmed to me offers have been submitted to each of them. We’re now getting an idea of what the offers look like, with Jane Slater of NFL Network reporting all three are not only being considered “generous,” but they would make Prescott, Cooper and Elliott the “top five highest-paid” at their respective position. If not accepted as-is or at least with some level of compromise, though, the Cowboys are prepared to enter the season with each of them operating under a prove-it deal.

This makes an already interesting conundrum that much more so for the team, and for a variety of reasons.

As mentioned, neither Prescott nor Cooper are in a hurry to get a deal done. Both have already seen their price driven higher by deals signed around the league, with the Philadelphia Eagles inking quarterback Carson Wentz to a four-year, $128 million extension in June that includes $107 million in guarantees, and that deal came not long after the Seattle Seahawks reset the QB market by signing Russell Wilson to a four-year, $140 million extension that also includes $107 million in guarantees — making him the highest paid quarterback in the history of the NFL. For Prescott, who was selected in the fourth round of the same 2016 NFL Draft that saw Wentz go second overall, it’s a no-brainer to exercise patience.

The ceiling has been set by Wilson and although it’s highly unlikely Prescott surpasses that in 2019, there’s still the matter of Jared Goff — the first-overall selection from the 2016 draft — who hasn’t inked a new deal with the Los Angeles Rams as of yet. If Goff lands his new contract before Prescott does, it lifts the floor higher than where Wentz left it, and shrinks the size of the gap between that bar and the ceiling that currently belongs to Wilson.

Cooper finds himself in similar air as Prescott, because the cost of an NFL wide receiver flew through the roof this summer.

Talks between Cooper and the Cowboys stalled in May and there hasn’t been any real progress made since, and it’s because the reality is that waiting for Michael Thomas and Julio Jones to secure their new deals with the New Orleans Saints and Atlanta Falcons, respectively, ultimately gives Cooper the right to up his asking price. Like Prescott, although it’s unlikely Cooper sets the market at the WR position in 2019, the fact Thomas’ five-year, $100 million puts him at the coveted $20 million average annual salary mark pulls Cooper’s value higher by default — something that will again happen when Jones inks his deal in North Georgia.

Allowing either (or both) Prescott and Cooper to play out their contract in a prove-it capacity probably wouldn’t bother either when you look at all of the variables, but certainly not the latter, because Cooper has already hinted at doing just that.

“Well, not [right] now,” Cooper said in late June when asked if he’s earned market-setting money yet, via ESPN’s First Take. “I’m definitely looking forward to earning that respect, and definitely looking forward to coming into this year and just putting up those numbers for my team, and really showing what I can do in a full season as a Dallas Cowboy. I know that I have the skill set to be one of the highest-paid receivers, but I’m just all about going out there and proving it.”

That sounds like a player willing to bet on himself in 2019, and odds are Prescott has the same train of thought on a team that is projected to have upwards of $100 million in salary-cap space when 2020 rolls around.

For Elliott, however, labeling the coming season as one that alludes to him having to prove something is disingenuous when considering everything he’s accomplished on the field — combined with the fact he’s still under contract for two more seasons. The only way to justifiably spin that toward the two-time All Pro is with an off-the-field angle, where he’s carried worrisome headlines in more offseasons than not. He was suspended for six games in 2017 following a well-publicized war in federal court against the NFL, and found himself in the news again several times in 2019 despite having displayed impressive maturation following his sophomore troubles.

Those issues are what the Cowboys view as leverage in their favor, and it helps in their negotiations with Elliott, yes, but that aside — he’s the only market-setter in this conversation. Elliott knows it and therein lies his leverage, along with the fact he’s averaging over 101 yards per game and is already on pace to shatter [more] franchise rushing records if he remains healthy, and that’s a safe bet considering he’s not missed a single game due to injury over his first three seasons en route to delivering 4,048 rushing yards and 5,247 scrimmage yards in his career.

Of the three players mentioned, it’s Elliott who is at the highest risk going forward and it’s also Elliott who can demand a market-setting wage right now. That’s why he’s holding out of training camp while both Prescott and Cooper chug along gleefully. In the end, the latter two feel they have time on their side, while Elliott statistically does not.

In the end, the Cowboys are confident all deals will get done eventually.

“Just know that like so many things, it’ll happen,” owner Jerry Jones affirmed on Monday from training camp, via NFL.com. “It’ll happen. There literally is no concern on my part at all about any time frame. That’ll happen.

Team exec Stephen Jones agrees, but won’t press the matter on any of his three superstars.

“We can’t push the issue unless we want to be a market-setter, and we’re damn sure not going to be a market-setter because of all the things that go with being a Dallas Cowboy,” he said days ahead of the elder Jones’ proclamation, in a conversation with 1310 The Ticket in Dallas.

That’s not entirely true, however, because the deal on Lawrence set the market for 4-3 defensive ends.

This shows there’s some cushion hiding behind the team’s words and while they’d prefer to not set the market, they may have to when it comes to Elliott. If Prescott and Cooper sign the offers in front of them this year, they’ll likely be the second- and third-highest paid players at the respective positions, and that’s a win for the Cowboys. They may have to offset a bit of that victory champagne by upping their deal to Elliott, though, because his production and value to the team extends far beyond simply being labeled a running back.

The Cowboys would love to go 3/3 in keeping each of their offensive stars under market value, but two out of three ain’t bad.