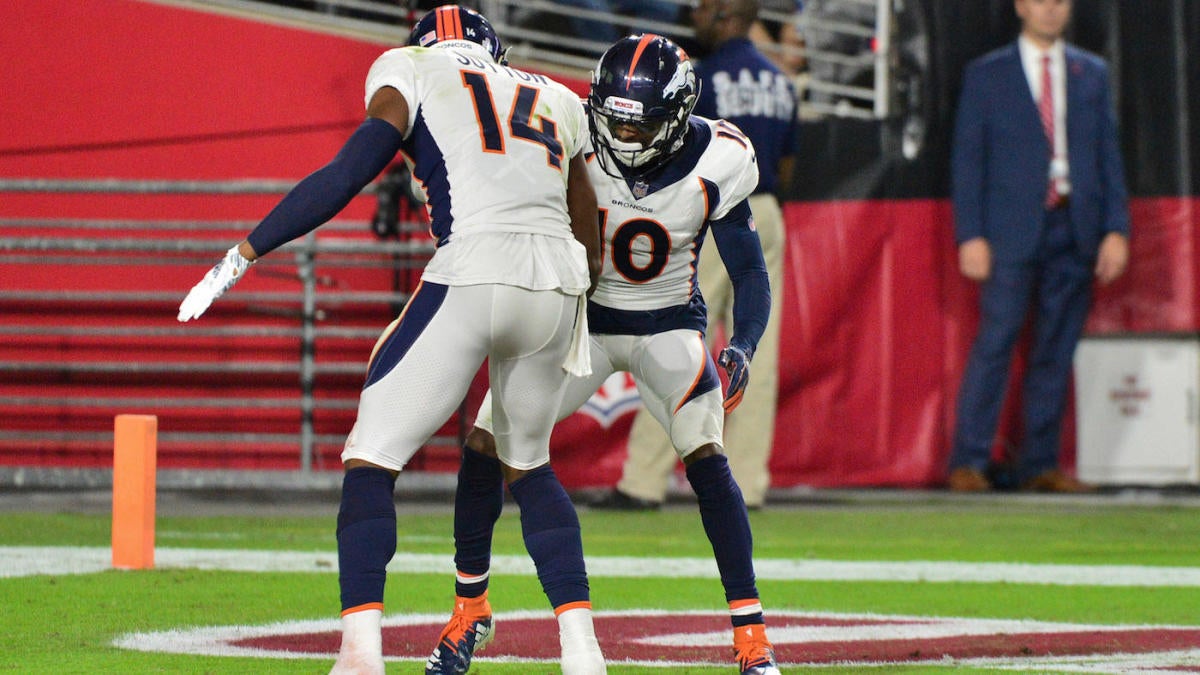 After Emmanuel Sanders and Courtland Sutton got into a scuffle at training camp on Monday, Broncos coach Vic Fangio made it clear that fighting within the team wouldn’t be tolerated.

We’ll start with the aftermath of Monday’s fight. After practice on Tuesday, both Sanders and Sutton addressed the incident with reporters. Sanders called the incident a “miscommunication” and described Sutton as “family.”

“It stands good,” Sanders said, per The Denver Post. “Obviously, we’re family. We went to the same school (SMU) and grew up in the same area. It’s a miscommunication and that’s just what it is. At the end of the day, we’re back on the same page trying to be the best receivers in the world. Sometimes, through failure there is growth. And I feel like me and him have grown through this in terms of bringing that dog out even more and just (being) ready to win and tear it up.”

“What Emmanuel said is right on point,” Sutton said. “We’re brothers at the end of the day. That’s all that matters. … This is a dude I look up to and a dude I’ve been watching for a long time chasing his records and getting here. (I’m) following in his footsteps. All that stuff is swept under the rug and we’re moving on to bigger and better things. We’re ready to win and take what we have here and keep growing it.”

Training camp fights aren’t unique; they don’t just happen in Denver. They’re regular occurrences around the league. That’s why they’re not really newsworthy most of the time. But what made that particular fight unique was that it happened within the same position group.

Just ask Joe Flacco, who is entering his 12th NFL season. Flacco downplayed the incident, but also noted he’d never seen a fight between two players who play the same position on the same team.

Finally, Fangio indicated that Sanders and Sutton have put the issue behind them. So the tension between the two receivers appears to have evaporated, which is obviously good news for the Broncos considering they’re going to be leaning on them to carry the passing attack.

For entirely different reasons, there are question marks about the two players. The Broncos need Sutton to take the next step in his development after a promising rookie season that saw him catch 42 passes for 704 yards and four touchdowns. Sanders, one of the league’s most productive receivers, is trying to to overcome a torn Achilles that ended his 2018 season in December.

The conflict between Sanders and Sutton is over, but on Tuesday, another scuffle broke out at practice when defensive lineman DeShawn Williams got into it with offensive lineman Don Barclay. From this point on, any Broncos players who get into practice scuffles should probably expect to find Fangio up in their face, because Fangio got very hands-on to break up the fight between Williams and Barclay.

He said on Monday that training camp fights “can’t happen.” He’s now proven he’s willing to take matters into his own hands to make sure they no longer happen.

Fangio just pushed DL DeShawn Williams away from scuffle with G Don Barclay. Pushed him back a good 5 yards or so. #9sports

Don Barclay and DeShawn Williams exchanged blows after a play. Vic Fangio immediately got in the mix, grabbed Williams by the pads (good form btw) and took him 10 yards to stop the fight ASAP.

Another dust-up at practice and Vic Fangio was NOT happy. Personally escorted the defender to the sideline with some force.

As for a 60-year-old coach rushing in there to push back a 292-pound defensive lineman, Fangio can explain his decision-making.

“It must’ve been a favorable angle or I wouldn’t have done it,” he said.