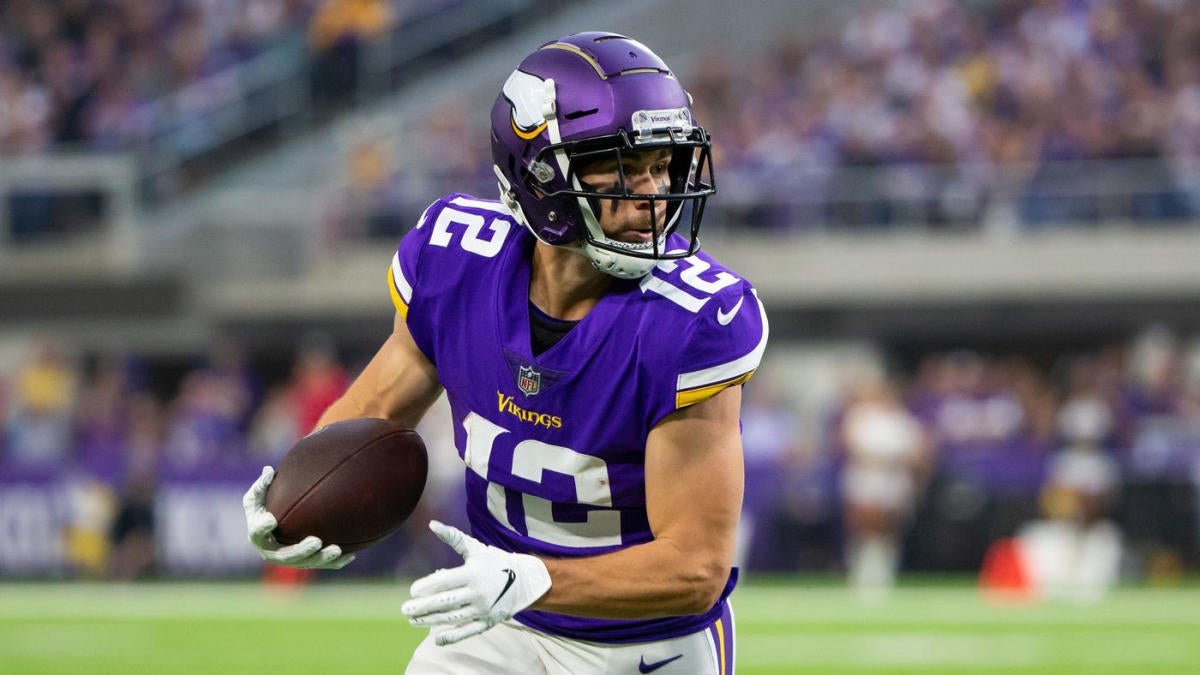 EAGAN, Minn. — When the Minnesota Vikings take TCO Stadium for their open-air night practice, a once-a-summer showcase that became training camp tradition a year ago, they make every effort to make it a family affair.

Players enter by walking next to herds of fans in the stadium’s concourse. They get to the turf by descending a staircase situated right next to the seats — so close that almost every athlete can hear the same shouted request from rows of teen boys: “Come meet me after practice!” And in a move reminiscent of the club’s days at Minnesota State University, Mankato, where players would bike through campus like anyone else in town, select Vikings faithful are invited to mingle amongst players, coaches and their families after the padded practice — one giant, purple get-together under the flashes of a culminating fireworks show.

Some faces are easy to spot amid the controlled chaos. Adam Thielen is inseparable from his wife, Caitlin, and their youngest son, 7-month-old Hudson. C.J. Ham is as rock solid as he looks on TV. Kirk Cousins keeps his distance but is the easiest to identify of them all, complete with his red No. 8 camp jersey.

One Viking, in particular, bucks this trend.

Pre- and post-practice player introductions Saturday night indicated that Minnesota is growing increasingly familiar with — and fond of — this Viking, delivering a sizable cheer at the sight of his No. 12. But if it weren’t for his jersey, it’s safe to say most of the more than 6,000 who packed into TCO Stadium would’ve mistaken him for something like an athlete’s little cousin. If that.

He’s listed at 5-foot-10 and 183 pounds. He could pass for even smaller. He’s an unassuming presence, a goateed little guy who looks up to even Dan Bailey, the kicker.

And he might be the Vikings’ most dangerous secret weapon entering 2019.

His name is Chad Beebe.

If the name rings a bell, that’s because Beebe’s NFL bloodlines are well documented: The 25-year-old wide receiver is the son of Don Beebe, who spent nine years playing the same position for the Buffalo Bills, Carolina Panthers and Green Bay Packers from 1989-1997. The younger Beebe also isn’t new to the Vikings. He originally joined the team in May 2018 as an undrafted free agent, earned a spot on Minnesota’s practice squad, then remained there until his promotion to the active roster in November. Before a hamstring injury sidelined him for five games, the Northern Illinois product hauled in four catches off the bench.

How, you ask, does a guy with four career catches figure into the Vikings’ plans to reclaim the NFC North?

“He’s just a guy that makes plays,” Thielen says. “And in this league, when you make plays consistently and you show that you can get open against press, man coverage, you’re going to get opportunities. And that’s what he’s doing.”

That’s not just a repeat Pro Bowler talking up his teammate for the sake of offseason encouragement, either. Beebe was exclusively slotted into team reps as the Vikings’ No. 3 wideout on Saturday under the lights, pushing former first-round draft pick Laquon Treadwell to the second-team unit. He was the lead punt returner in special teams drills. And as CBS Sports’ Pete Prisco noted, echoing weeks of praise from Vikings territory, Beebe has Mike Zimmer’s staff downright abuzz with excitement.

“We have a lot of confidence in him getting open,” Thielen says.

The high expectations, especially considering Beebe’s limited resume, stem in part from what Thielen points out: “He’s going to get a lot of single press and man coverage” with Thielen, Stefon Diggs, Kyle Rudolph and rookie tight end Irv Smith Jr. all vying for targets. Most of the hype behind Beebe’s emergence from anonymity, however, centers on how closely his uphill battle mirrors that of another, better-known Vikings wide receiver — a guy named Adam Thielen.

Physically speaking, the two aren’t really comparable, with Thielen edging Beebe by four inches and almost 20 pounds. But before he went big time and earned big money as the team’s most productive receiver since Randy Moss, Thielen famously followed a similar script. He went undrafted out of a small Midwestern school. He was a virtual non-factor as a rookie. He was an unknown at the time of his first notable role. And then, inexplicably, he just couldn’t stop getting open.

Beebe says there’s “no doubt” a comparison to be made and calls Thielen “a guy that I look up to,” but he’s quick to acknowledge he’s got plenty to prove. If he’s going to be the next Adam Thielen, he’s got to make sure he can deliver a reliable Chad Beebe. And that’s always been his most challenging task — not beating Xavier Rhodes in practice, but staying out of the training room.

It’s the kind of backstory that derails countless dreams year after year in the NFL. And yet here’s Beebe now, on the cusp of a legitimate job for a legitimate contender. He’s wanted this — to follow in his dad’s footsteps — since he was 5, and after all his physical setbacks, not to mention the brevity of the average pro football career, he has no problem living out Thielen’s advice: “Enjoy the moment.”

Unsolicited, Beebe declared his Christian faith, another Thielen staple, the foundation of his perseverance.

“It hasn’t been always the easiest road,” he says, “but I just kept hanging on to my faith in the Lord, and He’s brought me a long way … That’s the biggest thing in my life, and I know I wouldn’t be here if it wasn’t for that, and so, for me not to tell people about that, I’d be crazy. I hold that dear to my heart.”

Beebe doesn’t draw David and Goliath parallels to his story, but he could. Small kid conquering name recognition with crisp technique and a lot of good old-fashioned grit. Instead, he points to Romans 12:12 as his motto.

“That’s just, basically, being patient in affliction and joyful in hope,” he says. “I’ve had a lot of trials and tribulations throughout my career, mostly due to injury … and that passion was never taken from me. The Lord continued to press that passion in me.”

Passion, of course, is one thing. Performing on Sundays is another. But Beebe’s certainly saying and doing all the right things until then. He claims he never looks at individual statistics. (“That’s never been my thing. And, honestly, if it was, I don’t think I’d be here.”) After visiting Cousins at the quarterback’s home in Michigan for several summer bonding and throwing sessions, he’s “very, very confident” the man throwing him passes has what it takes to win it all.

“He’s a great guy, first of all,” Beebe says, “and secondly, a great quarterback. Great pocket passer, all those things. Very smart. And he can lead our team to a championship, there’s no doubt.”

Anyone at Saturday’s practice should know Cousins and the Vikings still have kinks to work out for a title run. Beebe’s side of the ball, in fact, was neutered for much of the night’s live, 11-on-11 action. Linebacker Eric Kendricks could be overheard poking fun at a “lollipop” from Cousins after two failed red-zone throws, the team’s remade interior let up lots of pressure, and Diggs was at one point so frustrated with trash talk from Rhodes that Zimmer himself had to escort the fuming wideout to the sidelines.

And yet, even if Saturday’s imperfect showing is a precise indication of what’s to come, it bodes exceedingly well for Beebe: A run- and roll-out-heavy offense is exactly the kind of system that favors guys like him — sharp route-runners whose sole job is to collect quick strike after quick strike from the pocket. The opportunity is there. The internal support is, too.

If ever Beebe is going to make that long-awaited leap, it’s going to be in 2019.

Then, without question, people will know who he is.