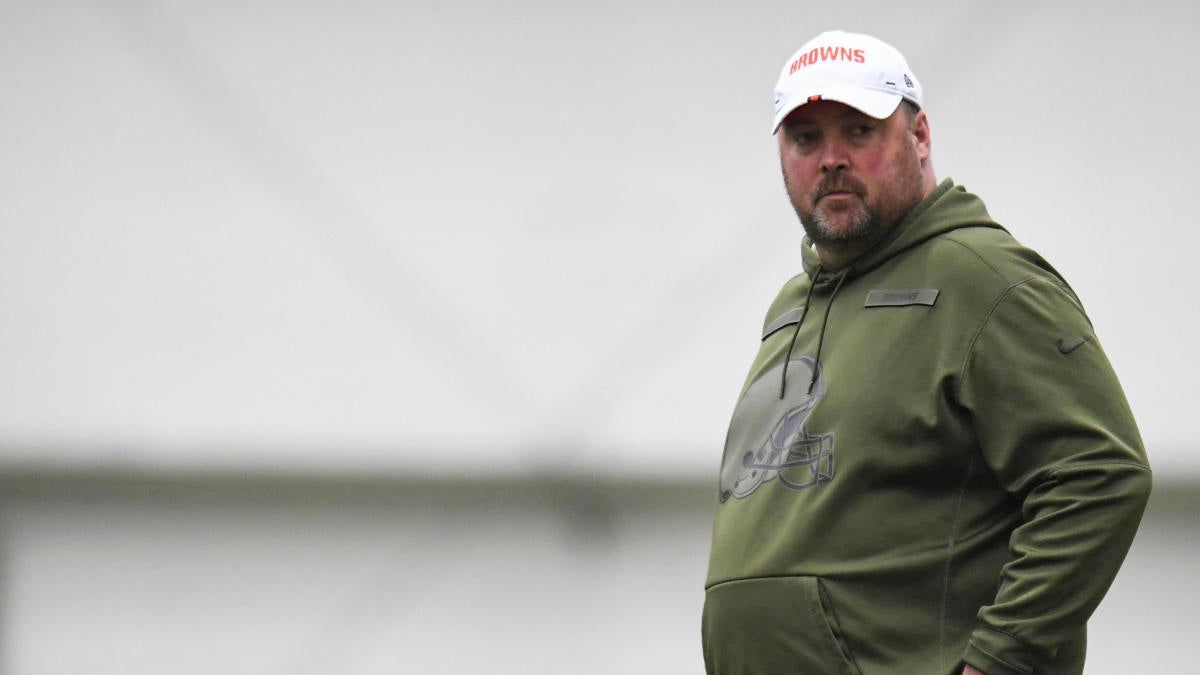 Wylie, who was not retained when the Browns overhauled their coaching staff this offseason, recently said on The Zach Gelb Show on CBS Sports Radio that former Clevland quarterbacks coach Kenny Zampese, not Kitchens, was mostly responsible for the Browns’ second half turnaround during the 2018 season. Kitchens was named the Browns’ new head coach following Cleveland’s 5-2-1 finish to the 2018 season following the midseason firing of former head coach Hue Jackson.

Wylie also said that that his daughter informed him of Cleveland’s decision not to renew his contract while Wylie was in the hospital after taking a leave from the Browns in December to deal with knee and ankle injuries.

Kitchens was immediately asked about Wylie’s comments at the start of Monday’s post-practice media session.

“I know Bob Wylie to be a good person,” said Kitchens, who worked alongside Wylie throughout the 2018 season. “And out of respect for his family, I won’t get into any of that. Because he’s a father, he’s a husband, he’s a granddad. [But] Bob knows what happened. Bob knows what was going on. And when he was here, he knew everything about it. So, that was last year.

“Listen, Bob wasn’t under contract,” Kitchens continued. “He forgot to tell everybody that. He wasn’t under contract. He had talked about retiring forever, alright? So, sometimes when a person says something, they have to be made to feel relevant, OK? Bob’s a good person, and I don’t wanna lose sight of that. I have too much respect for him as a person.”

It appears that two things are bothering Kitchens more than Wylie’s recent criticism. One thing is how Wylie’s comments overshadowed the good things that are currently happening around the Browns’ organization. Cleveland recently hosted an open practice for their fans at FirstEnergy Stadium, with ticket sales from the event going towards the team’s recently founded initiative to help support Ohio-area schools.

“We just had 40,000 people in a stadium for a practice, where all the proceeds went to the Get Started Initiative that the Browns have done,” Kitchens said. “So, that got lost in the shuffle of all the stuff that happened last year.”

It’s also clear that Kitchens is tired of leaks and unnamed sources that are coming from within Browns headquarters. Kitchens vowed to put a swift end to anyone he sees doing anything of the sort moving forward.

“The days of inside information and the days of unnamed sources and stuff like that have ended,” he said. “So you’re not going to get any information like that, ever. Anybody. And I ever see it, they’re fired, immediately. And that’s how we’re running this organization. I can take it. [Cleveland GM] John Dorsey can take it. We won’t crack, I promise you.”

Kitchens is in uncharted waters. Not only is he a first-time head coach (at any level), Kitchens is presiding over a team that has extremely high expectations entering the 2019 season. Kitchens’ roster is one that includes several high profile NFL stars, including quarterback Baker Mayfield, receiver Odell Beckham Jr. and running back Kareem Hunt. Not only does Kitchens have to try to put together a championship-caliber product this season, he has to do so while also managing the many personalities on his team while also dealing with remaining in the national media circuit on a weekly basis.

Dealing with heightened media distractions is one of the challenges of coaching a team with championship expectations. The Patriots have become the standard when it comes to blocking out the outside noise while not losing sight of the goal: a Super Bowl title. The Steelers, a perennial AFC North favorite and Cleveland’s historical rival, has struggled in recent years with regard to blocking the outside noise while remaining focused on the ultimate goal. In a twist of irony, Pittsburgh is now the team that is flying under the radar of national scrutiny, while the Browns are now learning how to deal with being under the microscope.

Despite the new challenges that continue to surround his team, Kitchens made it clear on Monday that he believes that he is strong enough to withstand any storm that comes at him and his team. Whether or not his team is also up to the task is what will ultimately determine the fate of the 2019 Browns.