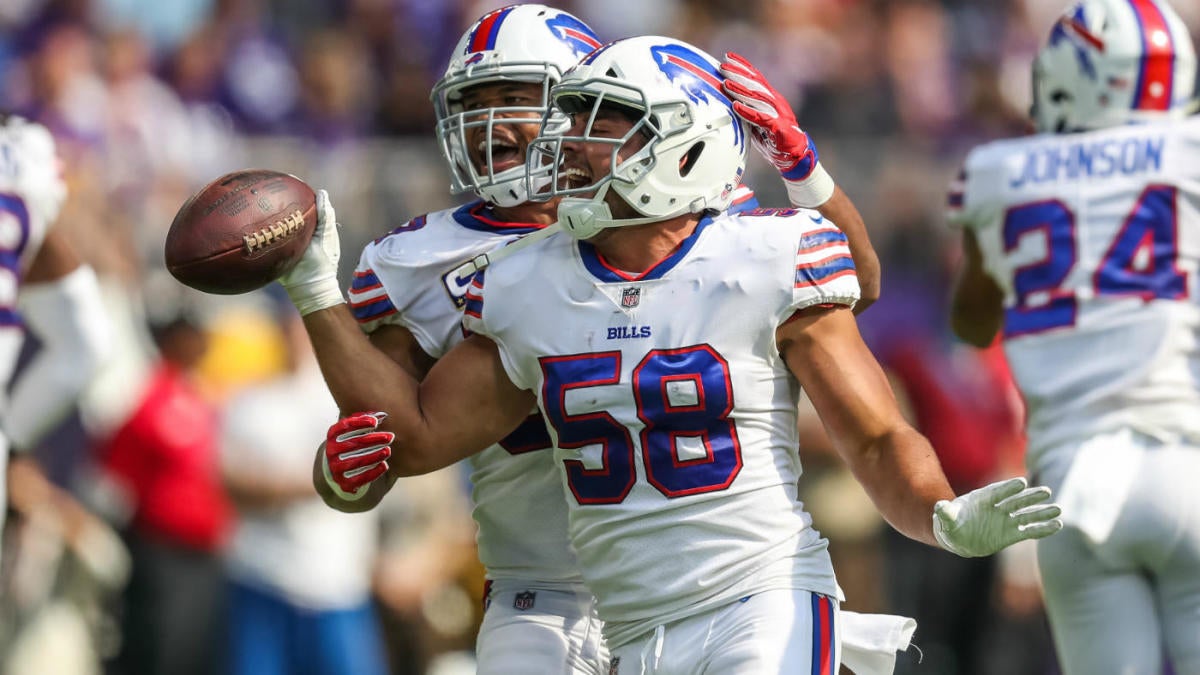 For the longest time it was trendy to pick the Bills as a playoff team, but for 17-straight seasons it didn’t happen. Maybe you heard about it. But with the monkey finally off its back, Buffalo, under the direction of head coach Sean McDermott, does not feel like the playoffs are a distant goal.

The defense, which finished second in Football Outsiders’ DVOA despite allowing 47 points in the season-opening defeat at the hands of the Ravens, returns the vast majority of its starters and role players and boasts Ed Oliver in the spot vacated by the retirement of Kyle Williams.

The offense saw a clear boost after Josh Allen returned from injury for the final six games of 2018. In the first nine games of the year, Buffalo averaged 10.6 points per outing. Goodness. Even discounting a 41-point outburst led by backup Matt Barkley in a win over the Jets at Met Life Stadium, the Bills averaged a respectable 22 points per game with Allen under center in those aforementioned six games to end the year.

Also, it will feature a host of new players up front and in the receiver group. Allen still has a ways go to before he’s considered a viable passer, but even a slight continuation of the maturation he showed late as a rookie should be enough for Buffalo to near double-digit wins even if the club is buoyed by a stellar defense, run game, an occasional big play down the field.

And here’s what I mean by that. Buffalo went 6-10 last year (3-3 in one-score games) with the second-worst offensive DVOA in football — with a percentage that would’ve been the worst in 2017.

I don’t expect this to be a top unit. But if the Bills offense rises out of the bottom third of the league in efficiency — and it’s positioned to do so — Buffalo should win much more in 2019, even if the defense takes a minor step back.

Plus, the Bills should be well rested throughout the year. Per ESPN’s Brian Burke, Buffalo is tied for third with +8 days in rest differential this year. For context, the Patriots have the league’s worst rest differential at -13 days. And the Bills are one of nine teams that do not face an opponent that’s coming off a bye week. Also on the schedule front, Buffalo opens with back-to-back road games against the Jets and Giants before hosting the Bengals in Week 3 and get three-straight home contested out of their Week 6 bye. Pretty favorable first half of the schedule.

It won’t always be the prettiest, and they could lean on a few tiebreakers like in 2017, but the Bills are going back to the playoffs this season.

1. The Bills will make the playoffs

Sean McDermott and Brandon Beane are in lockstep and have been aggressive building the roster in Buffalo. While it’s not a flawless group, Beane knows the exact type of players McDermott wants and has done a fine job getting them. The defensive line has impressive depth, as does the secondary, and the linebackers are rangy.

From his time in Carolina, we know McDermott understands what it takes to thrive defensively in the NFL, and there are a handful of star-caliber players in Western New York right now.

The level of team success will ultimately hinge on Allen, but this is the best Buffalo roster since the 2014 club that went 9-7 and just missed out on the playoffs. This year, in a parity-filled AFC, a 9-7 record gets the Bills in.

Tremaine Edmunds is going to be star in the NFL. And after a slow start to his career as a rookie in 2018, he finished strong with 39 tackles, two picks, and three pass breakups in his final four games of what was his age-20 season as a pro.

As the massive, super-explosive first-round pick, Edmunds is the easy-to-spot member of Buffalo’s linebacker group, and he’s primed to be a household name soon. But don’t sleep on Edmunds’ linebacking partner Matt Milano. The former Boston College star erupted as a sophomore in 2018 with 78 tackles, 12 tackles for loss, seven pass breakups, and three picks in 13 games before a broken leg ended his season.

Milano has been practicing in full at training camp, and he almost always looks a step ahead of what’s happening because of his improving awareness, aggressive nature, and twitchiness. Plus, last year, he showcased outstanding coverage ability, which is vital for linebackers today. Even next to Edmunds, Milano will load the stat sheet. A big number of tackles for loss and high ball production (picks and pass breakups) will lead to some type of All-Pro distinction (The Associated Press is still considered the official one, but I’m counting Pro Football Focus here too).

This is something I hinted at in my breakdown of the Bills’ running back group, which understandably might seem crazy after the team’s top two backs in carries, LeSean McCoy and Chris Ivory, averaged 3.2 and 3.3 yards per rush, respectively, in 2018.

But Buffalo’s offensive line last year? Not good. So what did Beane do? He signed six blockers in free agency and traded up two spots to snag bulldozer Cody Ford in the second round of the draft. It’s going to take time for the Bills’ offensive front to gel. But its going to move people much more effectively and consistently than it did last year.

As for the backs, McCoy is still spry, Frank Gore is fresh off a 4.6-yards-per-carry season in Miami, T.J. Yeldon reached the 4.0 yard plateau in Jacksonville a season ago, and Devin Singletary, well, he was my No. 1 running back in the 2019 draft class.

In front of a revamped line, Buffalo will return to being one of the better, more efficient running teams in football this season.

Everything from Bills camp regarding the receivers has been about John Brown as the most impressive wideout. Or Cole Beasley creating separation underneath and catching everything. Or Robert Foster getting loose downfield.

It’s like Zay Jones isn’t even on the team anymore.

While he hasn’t necessarily turned heads thus far in Rochester, he’s had a steady camp and was the best pass catcher on the field in Friday’s night practice at New Era Field.

Oh, and let me ask you — who led Buffalo in receiving touchdowns in 2018? Jones, with a respectable seven. When Allen returned from injury last season, Jones had five scores in the final five games. He’s big, very athletic, and kinda-sorta came into his own as a sophomore. While Brown, Beasley, and Foster will be key targets in Buffalo’s pass game this season, Jones will ultimately lead the team in receiving scores once again.

5. Shaq Lawson gets traded during the season

Beane hasn’t been timid about making trades as Bills GM, and Lawson was drafted by the previous regime in Buffalo, a distinction no player loves.

He has steadily improved in each of his three years in Western New York, but the front office decided to decline the former first-round pick’s fifth-year option, meaning 2019 is his make-or-break season with the Bills.

Lawson’s become a high-caliber run defender, yet the pass-rushing productivity simply hasn’t been Round 1 caliber. Even if he continues to develop this year, he seems like the prime player on Buffalo’s roster who would be involved in a trade because he’s young and has an arrow that’s pointing up; therefore, he could fetch something reasonably good in return.

Also, the older Trent Murphy, who largely disappointed as a free-agent add in 2018, has started very strongly in camp, and Jerry Hughes is still the alpha outside rusher in Buffalo who was just given a contract extension. Make sure you know the names Mike Love and rookie Darryl Johnson at the defensive end spot too.