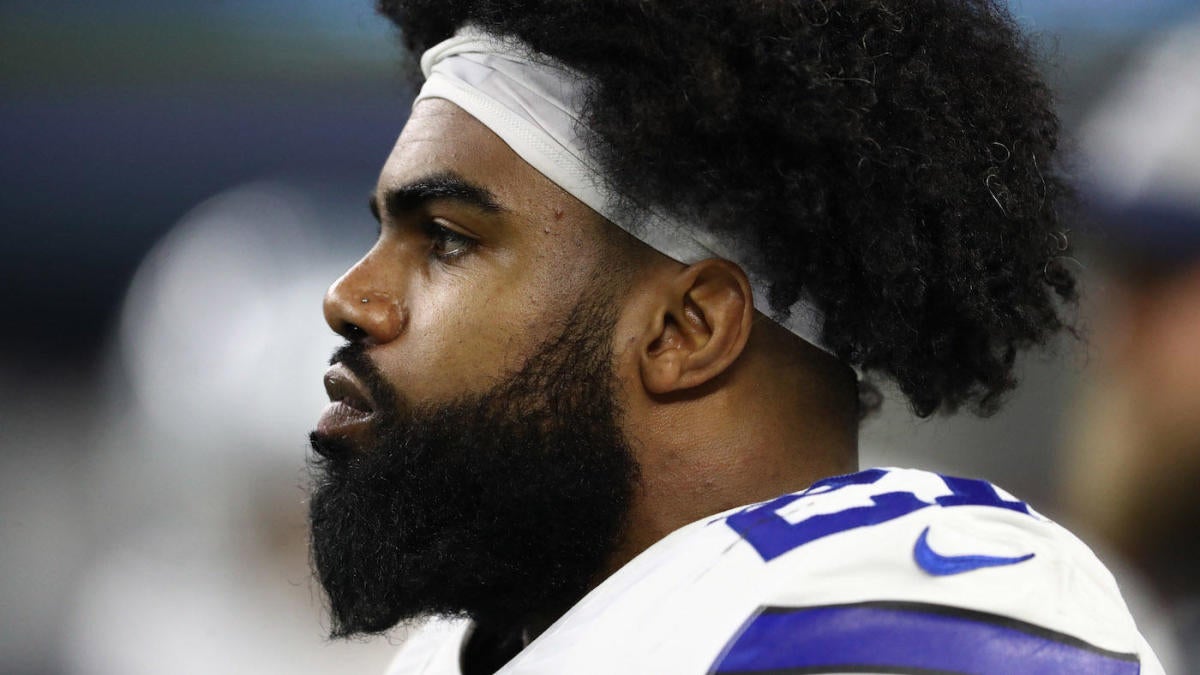 An active NFL contract negotiation is a tango of sorts, and Ezekiel Elliott is getting dipped for the first time in his young career.

With a week having now passed in training camp and the two-time rushing champ still absent as he holds out for a new contract, talks remain open and progressive with the Dallas Cowboys, but nothing is imminent just yet. While everyone watches the pot of water waiting for it to boil — actively trying to determine if the two sides are close to a new deal or far from it — the reality is Elliott and the Cowboys are focused on an entirely different unit of measure.

It’s more so about gauging if talks are moving forward or backward, and at the moment they haven’t stalled or been forced to perform a U-turn — the stage still being set for it all to be resolved soon — sources with knowledge of the situation continue to affirm to me.

There is, however, no timeline for the arrival of Elliott’s new contract as he trains vigorously at his agent’s property in Cabo.

While the Aug. 6 deadline to report and accrue another year toward NFL free agency is a date to circle on the calendar, it’s one that could be made irrelevant by a deal landing at any point between now and the expiration of Elliott’s current contract in March 2021. Considering it’s highly unlikely no longterm deal will be in place 20 months from now, it’s fair to circle Aug. 6, 2019 in pencil and not with a permanent marker.

As for club owner Jerry Jones, who recently took fire for misinterpreted comments about NFL teams do not needing a rushing champ to win a Super Bowl, there was a bit of damage control to be done when he addressed the media from training camp in Oxnard, California on Thursday afternoon. The Hall of Famer didn’t shy away questions on Elliott whatsoever, instead becoming quite candid on not only the two-time All-Pro’s value to the team, but also firing back at any assumption he’s somehow lost his touch when it comes to being the consummate deal closer.

So, is the admittedly “patient” Jones worried about a deal not getting done with Elliott?

“No, I don’t consider it,” he said before unsheathing his sword. “When have I ever not done one? So, I don’t worry about that.”

That’s a rather definitive statement from a man who has the track record to back it up, but the reality is that until Elliott shows up for camp, the proverbial show must go on.

“You just keep plugging along,” Jones said, via the team’s official website. “I don’t want to seem cliché, but its what we tell these guys. It’s one foot in front of the other and go. Do what you have to do on the next play, which is put somebody else in there and keep going.”

To that end, the team reunited with veteran Alfred Morris on a one-year, $1.2 million deal after the first day of padded practice in a move that some viewed as a direct shot fired toward Elliott. Morris was a member of the team in 2016 and 2017, and was serviceable in his final year during a six-game suspension that sidelined Elliott. Considering Elliott had nearly 200 more rushing yards and four more rushing touchdowns in a 10-game 2017 season than Morris had in two years as a Cowboy, logic openly dictates the move was not to somehow threaten Elliott into signing before he’s ready.

It’s instead to fill the six-man RB depth rule in camp as dictated by team exec Will McClay, and to create more competition for the RB2 role. Morris does provide some familiar insurance in the event Elliott’s holdout lingers, but that’s about the long and short of it. If Darren McFadden had not been retired, he might’ve gotten the call, considering the Cowboys considered bringing back an oft-injured Lance Dunbar before reaching out to Morris.

“You recognize Morris has made some big plays for us in Zeke’s absence, and so you go get Morris,” Jones said, before cutting off any allegations of leveraging at the knees. “In no way is it addressed towards directing toward a negotiation stance, that’s not the point. What you should be doing is developing an offense with running back that you can use from the position. You should be doing that and this gives us more reps to do it during this particular time.

“We have to do this in case Zeke might not be here, period. Without a contract issue and we all know that can happen.”

With no plans to play Elliott in any of the four preseason games anyway — as has been the case the previous two years as well — there’s less pressure for the 24-year-old to be in camp outside of being present, as new offensive coordinator Kellen Moore works to complete his schematic installations. Moore himself has said there is no concern whatsoever on if Elliott can simply return and instantly burst forward in prime form, and Jones echoes the beliefs of his new play-caller.

“Zeke is in my mind, very conscientious about his preparation to play,” Jones said. “I’m not even giving it a second thought to his conditioning, which is part of his ability to step right in and play. That’s not even an issue. I’m not concerned with him missing reps out here with respect to getting his timing down.

“All of that is very easy for my mind to deal with.”

While things turn dark in Los Angeles following news of Melvin Gordon‘s reported request for a trade that was ultimately denied by the Chargers, and on the heels of the NFL witnessing Le’Veon Bell set a precedent by absorbing massive fines to sit out an entire year thanks to contract disputes with the Pittsburgh Steelers — it’s fair to wonder if Elliott would be willing to invoke the latter option if talks rapidly disintegrated between his reps and the Cowboys.

For Jones, that’s also not a concern.

“I don’t see it that way. I don’t see a point months into the season,” he said. “I don’t see a point. I’ve done it a lot more than these players have — I don’t want to seem trite or cavalier about it — but I have a little more patience about how things are going to get done and the necessity to have angst when you have it.”

Elliott is set to earn a base salary of around $3.9 million in 2019 and $9 million in 2020 on his fifth-year option. The progress around getting his contract extension inked revolves around several metrics both sides are working to find a point of compromise with, but the direction of the talks remain forward — not stalled or in reverse. Until things are finalized, though, the Cowboys will be forced to continue camp without their all-world halfback who averages over 101 rushing yards per game, and is the crux of their entire offensive attack.

As far as Jones’ comments regarding NFL teams not needing a rushing champ to land a Lombardi trophy?

“My point I was making was you have to put in place more than a running back to win a championship,” he said, offering clarity and context to a statement that grew a life of its own, and taking a veiled shot at those who twisted his words. “That’s almost elementary. Everyone understands that. Certainly they want to be recognized when it comes to the money but on the other hand, it doesn’t [always] work in our house and then our house falls.”

Anyone who believes Elliott is doing anything but training in Cabo isn’t harkening back to 2017, when he returned from Mexico and his suspension in the form of Atlas. Running backs coach Gary Brown, who played eight seasons in the NFL himself, spoke with Elliott on more than one occasion recently and shared with media how that conversation went.

“Yeah, we’ve talked,” Brown said. “For he and I, it’s more [than] just coach and player. It’s like a guy that I’ve come to care about as a man and a human being and I want to make sure he’s taking care of himself. … From the couple of conversations we’ve had, he’s doing what he needs to do and is staying in great shape.

“I’m just looking forward to whenever he gets here, he’ll be ready to go.  … At the end of the day, he’s a ballplayer. A lot of this negative stuff you hear about him in the news and all that, that’s not who he is. He’s a really good guy, cares about his teammates and it’s killing him not to be here.”

The season opener for the Cowboys is still over a month away, and that leaves plenty of time for things to be smoothed out contractually with Elliott. And although Executive Vice Present and Director of Player Personnel Stephen Jones, who is routinely the more emotionally-detached executive at the Cowboys’ table, notes the team is “damn sure not going to be market setters” as it relates to the pending deals on Elliott, Dak Prescott and Amari Cooper — it’s key to note defensive end DeMarcus Lawrence landed a historic five-year, $105 million deal in April that made him the highest paid player in franchise history as well as the highest-paid 4-3 defensive end in the NFL.

The NFL is a business at the end of the day, as Lawrence found out the hard way and as Elliott is finding out for the first time in his three-year career. By all accounts, the holdout may run a bit longer than the Cowboys would like but likely won’t bleed into the regular season, with both sides still calm and optimistic about the current state of affairs — despite both being thirsty for a reunion.

Until the contracts are agreed upon and signed, though, neither side will be allowed a drink.