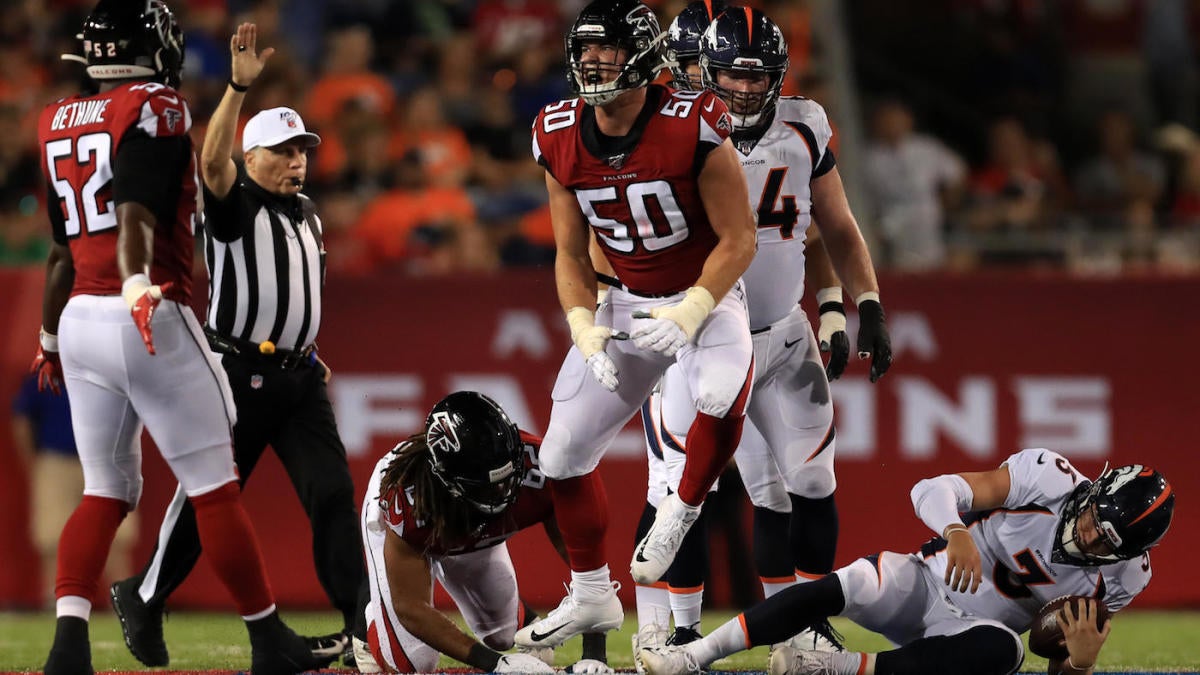 Football is back! Sort of. The 2019 Hall of Fame game between the Broncos and Falcons kicked off the season on Thursday night and while it was technically football, many of the participants won’t be on an NFL roster in a month’s time. But the other side of that coin is that some of those same players, who are long shots to make a team, made a name for themselves with noteworthy performances in a low-scoring game.

Here’s a look at how some of the rookies played — both good and bad — in their first-ever NFL action.

Lock, the second-round pick who many (us included) thought would sneak into the first round, didn’t have a great evening. In the grand scheme of things this isn’t a big deal — it’s his first NFL game in an offense he’s still beginning to learn, and most of Denver’s starters were watching from the sidelines. Still, Lock struggled, finishing 7 of 11 for 34 yards with no touchdowns or interceptions, but he was sacked twice.

On his first drive, he overthrew tight end Noah Fant, the Broncos’ 2019 first-round pick, on a sideline route. And a drive later, Lock took back-to-back sacks. The first came when the ball didn’t come out of his hand on a short drop, and he tried to scramble and was sandwiched by two Falcons defenders. The next was when Falcons rookie John Cominsky brought him down after Lock’s protection broke down.

Lock looked uncomfortable in the pocket all night and never found the rhythm he needed to be successful.

“I’ll rate it as a learning game,” Lock said after the game, via the Broncos website. “There’s definitely things I’ll learn there, but I’m excited that I’m sitting here and that was the first time ever stepping out on the field.”

First-year coach Vic Fangio said, “I was hoping for more but not surprised” by Lock’s performance, which echoes remarks he made to reporters last month.

“I don’t think he’s far along as far as being as NFL-ready a quarterback as he could’ve been,” Fangio said at the time. “That’s what I mean when I say he’s got to get ready. He’s not a quarterback yet — he’s a hard-throwing pitcher that doesn’t know how to pitch yet. The faster he gets that, the better off he’ll be and we’ll be.”

Fangio is right, but it’s important to remember that this is one mostly meaningless game that will have no impact on the type of NFL career Lock can expect.

Fant was the most athletic tight end in the the 2019 draft class and he could have an immediate impact on the Broncos’ offense, particularly given Joe Flacco’s affinity for tight ends. Like Lock, Fant wasn’t lights out on Thursday; he dropped the first pass thrown to him. He did move the chains two plays later, however.

And despite the knock on him as just an adequate blocker at Iowa, Fant showed well in that area of his game (though a holding call against him did negate a long run). Fant was targeted three times in the game and managed just the one reception. We didn’t get a chance to see Fant’s 4.5 speed against the Falcons but expect him to get more involved in the offense as the preseason progresses.

The Falcons made it clear in the offense that their first priority was to fix the offensive line and protect Matt Ryan. Lindstrom, the right guard out of Boston College, was the team’s first-round pick, and he was a bright spot during his one quarter of work. On his very first snap, Lindstrom showed off both the athleticism and strength that made him one of the best offensive linemen in the ’19 draft class:

“Every play I was trying to go as hard as I can, and just compete with toughness,” Lindstrom said, via The Athletic’s Jason Butt. “I was trying to come off the ball, and it worked out great on that play. I’m trying to get more consistent with that and the more I can get out of that, the better.”

Lindstrom and Kaleb McGary (the other first-round pick who will miss some time after undergoing a heart procedure this week) will serve as the cornerstones of the Falcons’ new-look O-line and Lindstrom’s strong debut has to be welcome news to Matt Ryan.

Jones was in and out of the first-round conversation during his 2018 season at Ohio State. Here was our scouting report on him heading into the draft:

“Low center of gravity, shows unique quickness for his size. Change of direction is uncanny, especially when closing down quarterback in backfield. Good motor, pursues plays downfield but sometimes struggles to disengage from blocks. Occasionally shows ability to win with hands but doesn’t win enough.”

Jones ultimately lasted until Round 3 but he looked every bit the first-round talent against the Falcons.

Granted, Jones did most of his damage against second and third-teamers but that’s the point — that’s exactly what he’s supposed to do.

An undersized tweener coming out of Nevada, Reed went undrafted despite racking up 16 sacks and 25.5 tackles for loss during his last two college seasons. And while he’s listed at 6-foot-1, 237 pounds, Reed was undaunted in his professional debut racking up four sacks and a quick-around-the-edge sack late in the first quarter:

Reed is still a long shot to make the roster but plays like that — especially on a Fangio-coached team — get your attention.

Cominsky looks the part. His biggest issue is that he played for Division II Charleston (WV), and it was unclear how he’d adjust to the speed of the NFL. We got a glimpse at the Senior Bowl where we wrote that he was “stout at the point of attack, had a good motor but wasn’t a quick-twitch player who could set the edge in the run game and showed some athleticism getting after quarterback behind line of scrimmage.” Cominsky could also “use his strength to march offensive linemen into backfield.”

Which is basically how Thursday night unfolded for him. We saw it above when he sacked Lock. But he also showed his ability to snake into the backfield and tackle the running back behind the line of scrimmage.

The fourth-round pick ended the game with three tackles and a sack.