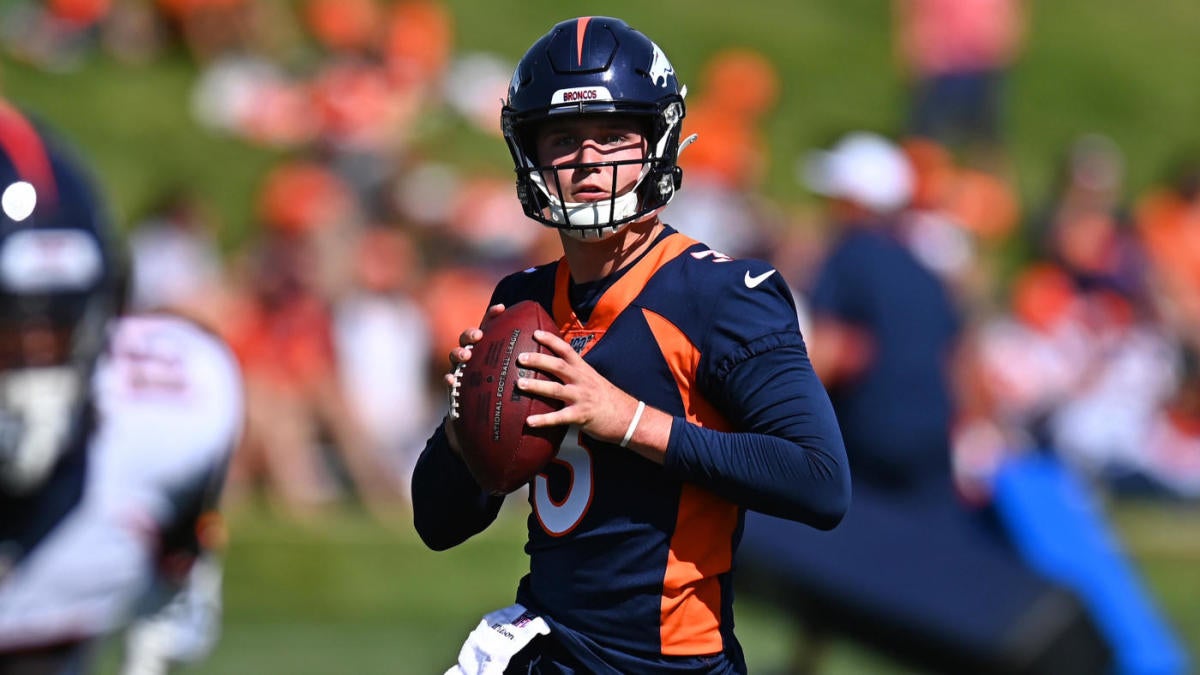 Drew Lock was facing a stacked deck during a recent Broncos training camp practice. Tasked with leading Denver’s scout team against the Broncos’ starting defense, Lock, a second round pick who earned a reputation as a gunslinger during his decorated college career at Missouri, went after Broncos veteran cornerback Chris Harris. As expected, Harris won the matchup, picking off Lock’s deep sideline pass.

While being outfoxed by a cornerback of Harris’ stature is nothing to get too worked up over, Lock didn’t give himself a pass when looking back on the play, per the Denver Post.

“That was the first time for me [running scout team],” Lock told reporters after practice. “Again, it was Chris Harris; I was still pretty (mad) at myself regardless of what happened. I’ll go back and look at everything that happened. I try to hold myself to a really high standard.”

Lock will be one of several rookies fans will be watching with great interest Thursday night, when the Broncos and Atlanta Falcons meet in the annual Hall of Fame game in Canton, Ohio. With starter Joe Flacco getting the night off, Lock will be the second Denver quarterback to take the field. He is currently No. 3 on Denver’s depth chart behind four-year journeyman backup Kevin Hogan. Lock could certainly use some positive tape against Atlanta to close the gap that currently exists between himself and Hogan.

On Thursday — and throughout the summer — Lock will look to answer some of the predraft questions surrounding his accuracy and ability to handle pressure in the pocket. He will also look to build on his strengths that include his quick release, field vision and above average mobility.

“Of course, I’ll be a little fired up [Thursday night] to show people what I can do and bring the juice that I brought through college,” Lock said, per the Post, adding that “managing the game” will be his plan against the Falcons. “I think you’ll still see the same me. I’m confident in what I can do, whether I go in right at the beginning of the game or at end of the game. I’m going to be the same guy and prove to people that one day, I should be starting these games.”

Lock will have a security blanket Thursday night in Broncos first-round pick Noah Fant. The second tight end selected in this year’s draft (behind his college teammate, new Lions tight end T.J. Hockenson), Fant has his sights set on earning the Broncos’ starting job during the preseason. While he doesn’t have to be the second coming of Shannon Sharpe to jump over current starter Jeff Heuerman on the depth chart, Fant will have to make some notable plays during the preseason to convince Denver to make him a Week 1 starter. Thursday night will be his first chance to do just that.

While Fant is fighting for a starting job, fellow rookie, former Colorado receiver Juwann Winfree is looking to solidify a roster spot. A sixth-round pick with underwhelming college stats, the 6-foot-3, 215-pound Winfree has been turning heads during the early portions of Broncos camp.

“Fifteen [Winfree] is nice,” Harris said after a recent practice, per the team’s official website. “I see him every day catching a lot of balls, having great routes. He’s stronger than a lot of people would think as a young receiver. I like 15’s game.”

After being excused from Maryland’s program following various violations of team rules, Winfree made the most of his opportunity in Colorado. Along with improving his draft status with on-field production, Winfree was also named team captain as a senior.

An athletic pass catcher who has shown a knack for catching passes in traffic, Winfree will have to prove that he can be a productive receiver at the next level while also staying healthy after dealing with ACL, ankle and hamstring issues in college.

Dre’Mont Jones, a former standout defensive tackle from Ohio State and the 71st overall pick in the draft, was acquired by the Broncos to add some bite to a defensive line that finished 21st against the run in 2018. Jones, who recorded a whopping 13 tackles for loss last season to go with three fumble recoveries, is an extremely versatile player who will most likely see time at defensive end, defensive tackle and nose tackle this preseason. His versatility was a big reason why new Broncos head coach Vic Fangio, who deployed a 3-4 scheme during his time as the Chicago Bears‘ defensive coordinator, selected Jones to help restore Denver’s status as one of the league’s most feared defenses.

Falcons rookies to watch on Thursday

While Atlanta’s offensive trio of quarterback Matt Ryan, running back Devonta Freeman and wide receiver Julio Jones are still Atlanta’s main offensive attraction, the Falcons are going to need to rely on some new faces at the running back position if they are going to get back into playoff contention in 2019. With Tevin Coleman — the team’s leading rusher last season — in San Francisco and with Freeman coming off an injury-plagued 2018 season, fifth-round pick Qadree Ollison will get his chance to shine during the preseason.

Ollison had an interesting career at the University of Pittsburgh. After rushing for 1,121 yards and 11 touchdowns (averaging 5.3 yards per carry) while replacing James Conner as the Panthers‘ starting back for the entire 2015 season, Ollison received just 123 carries during his next two seasons. But in 2018, Ollison was again asked to play a significant role in Pitt’s offense. He didn’t disappoint, rushing for 1,213 yards and 11 touchdowns while averaging 6.3 yards per carry. He addressed those Conner comparisons when he talked to CBS Sports draft analyst Ryan Wilson before this year’s draft, saying, “He’s great at all phases of the game and I try to be the same.”

Ollison’s power, speed and ability to rip off long runs (his tape against Virginia Tech last season speaks for itself) could be enough to earn him a spot on Atlanta’s 53-man roster — with a strong preseason, of course.

Chris Lindstrom, one of two offensive linemen taken by the Falcons in the first round (the other is Kaleb McGary, who underwent a cardiac ablation procedure on Wednesday after sustaining the injury on Tuesday), will look to create holes for Ollison and the rest of Atlanta’s backs on Thursday night. Lindstrom, who started in 49 of his 52 games at Boston College, has been working with Atlanta’s starters throughout camp. He will only strengthen his case to be the team’s permanent starter at right guard with a good showing against the Broncos.

Falcons fans should be excited to see what their team’s final pick in the 2019 draft has in store on Thursday. Marcus Green, a sixth-round pick out of Louisiana-Monroe, was officially listed as a running back during draft weekend despite playing receiver throughout his college career. An extremely versatile player who also starred on special teams in college, Greene amassed 5,231 all-purpose yards and 29 scores at Louisiana-Monroe that included four kickoff returns for scores in 2017. While he certainly proved that he could be a productive player in the college ranks, the 5-foot-8, 191-pound Greene needs to prove that durability won’t be an issue at the next level.

After finishing 27th in the league in pass defense last season, two mid-round rookies the Falcons are counting on are cornerbacks Kendall Sheffield and Jordan Miller. Miller comes to Atlanta after playing a key role in Washington’s Rose Bowl run last fall, while Sheffield, whose Buckeyes defeated Miller’s Huskies in Pasadena, is looking to join the Buckeyes’ long list of Pro Bowl level cornerbacks.

A former track and field standout, Miller will look to utilize his speed at the next level while improving his play with regard to run support. Like Miller, Sheffield is also a speedster who will have to show that he can be a reliable presence in run support. Sheffield is also facing questions about his ball skills and ability to cover bigger receivers.

Keep an eye on this sleeper

A less-heralded rookie I’m specifically interested in watching Thursday night is the Broncos’ other rookie quarterback, Brett Rypien out of Boise State.

Die-hard NFL fans should be familiar with the Rypien name. Brett’s uncle, Mark Rypien, earned MVP honors in Super Bowl XXVI while quarterbacking the Washington Redskins to their third and most recent Super Bowl title.

The younger Rypien is looking to follow in his uncle’s footsteps following an incredible run at Boise State that saw him finish his career as the Mountain West Conference’s all-time leader in passing yards (13,581), completions (1,036) and touchdown passes (89). He also led the Broncos to a 40-13 record during his four seasons in Boise.

Despite his college achievements, Rypien did not hear his name called in the draft, as many NFL analysts expressed concern over his hand size and questionable arm strength.

Rypien, who will be the third Broncos quarterback to see the field on Thursday, has an uphill climb to make Denver’s 53-man roster. A strong performance Thursday night, however, would definitely go a long way towards strengthening his case.

“He’s one guy that hasn’t gotten as many reps,” Fangio said earlier this week, per USA Today. “It’s unusual to have four quarterbacks in camp so his reps have been not equal to some of the other guys, but I think he’s doing OK.

“Brett’s a smart guy. He knows football, understands it, has a good football background from Boise where he played a lot of football successfully and we’ll see how he progresses.”