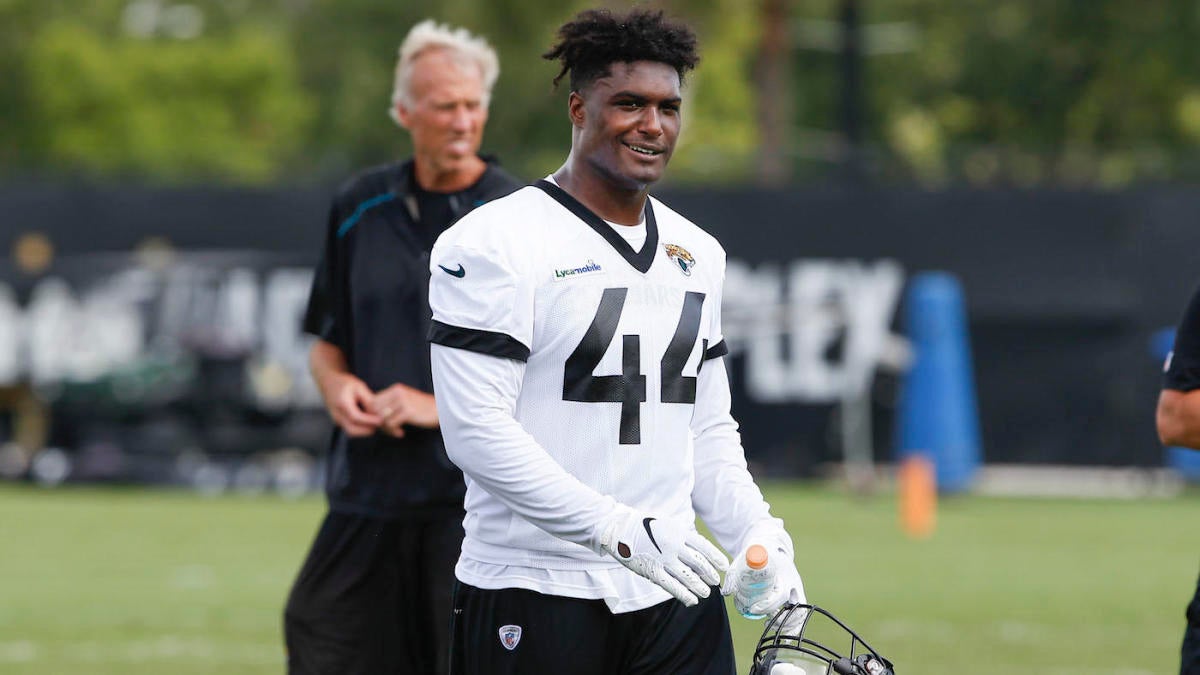 Training camps are in full bloom. There have already been a few costly injuries, the release of unofficial depth charts as the pecking order at position groups around the league begin to take shape, a few particularly impressive Kyler Murray highlights, and even the dismissal of one assistant coach. In other words, football — both the good and the bad — is finally back.

As the preseason nears and the regular season inches closer, here at CBS Sports we’re continuing our training camp series that takes a look at the most important positional battle for each and every team. With that in mind, it’s time to move onto Jacksonville, where an intriguing competition at linebacker has materialized this summer due to the sudden departure of one key player.

You can find all our training camp battle stories <em>here</em>.

While cornerbacks Jalen Ramsey and A.J. Bouye and edge rushers Calais Campbell and Yannick Ngakoue have captured most of the accolades as the Jaguars‘ defense has risen to glory over the past couple seasons, the linebacker group also deserves a wealth of credit. Since the Jaguars’ defense has emerged as one of the league’s top defensive units, the linebacker group — spearheaded by Myles Jack and Telvin Smith — has been a real strength of the team. As such, the Jaguars haven’t had to worry about their linebackers for a while now.

But circumstances have changed. In May, Smith announced that he will sit out the entire 2019 season for health and family reasons. It’s a huge loss, one the Jaguars couldn’t have really seen coming.

As you can see below via Warren Sharp, Smith hasn’t just been a good player since he entered the league as a fifth-round pick in 2014; he’s been historically good. This is what the Jaguars are losing in 2019:

How the Jaguars replace Smith might not matter as much as how Nick Foles performs as the team’s new franchise quarterback, but it will matter a great deal. While the Jaguars’ defense was still very good last season (sixth in DVOA), it was’t the unstoppable force it was in 2017 (first in DVOA), which propelled them to the conference championship game before Tom Brady did Tom Brady things to render their defensive dominance insignificant. While Foles could help the team get back to that point, it’s more likely Foles will be his normal inconsistent self with stratospheric peaks and deep craters, which means the Jaguars will need their defense to reclaim their status as the league’s top defense if they’re going to journey deep into January.

That’s why the battle at linebacker matters. The Jaguars didn’t just lose Malik Jackson and Tashaun Gipson to cuts. They also lost one of the best linebackers in football — at least for a year, anyway.

Players in the Mix

MLB Myles Jack
At the very least, the Jaguars won’t be forced to soldier on without Jack, who isn’t just one of the team’s best players, but is also one of the league’s best young players. Jack will be back. And it’s not unfair to suggest he could still be peaking.

After falling to the second round in the 2016 draft due to injury concerns, Jack has proven he holds the talent level of a first-round pick. He’s yet to miss a game in his three-year career. In that span, he’s racked up 219 combined tackles. He’s seen his stats improve every single season, as his yearly tackle output has jumped from 22 to 90 to 107.

Jack will undoubtedly start, barring an untimely injury before Week 1. He’s going to be the anchor in the middle of the Jaguars’ defense. Nobody needs to worry about him. It’s the areas around him — the weak and strong sides — that it begins to get dicey.

The Jaguars could, in theory, decide to shift Jack to the weak side — where Smith used to play — while allowing someone else to handle the middle. Asking Jack to switch positions might prove to be unwise, though. The Jaguars are probably better off letting Jack remain where he excelled a season ago instead of moving him to fix a problem at the weak side and in the process, accidentally turning one problem into two.

Jack should remain in the middle, even though he has the flexibility to slide around.

MLB Jake Ryan
Let’s say the Jaguars were to shift Jack to the weak side. If they did, Ryan would probably become the top candidate to replace Jack in the middle.

Coming over from Green Bay this offseason, Ryan flew under the radar with the Packers when he’s been a mostly solid contributor over the course of his career. In three seasons (he missed all of his fourth with a torn ACL), he’s tallied 206 combined tackles, 15 of which went for a loss. He averaged 80 combined tackles per season from 2016-17.

The only problem? Ryan still isn’t quite healthy enough to play. Working his way back from that torn ACL, Ryan is stuck on the non-football injury list. It’s not clear when he’ll be good to go.

“(A timetable for Ryan’s return) hasn’t become clearer,” coach Doug Marrone said recently, per The Athletic. “Not trying to hold anything from you.”

If he’s healthy, he should back up Jack in the middle. He could also see the field if Jack were to shift positions. But first, he needs to get healthy. When he does, he’s likely to become an important depth piece.

SLB Leon Jacobs
After logging three starts and 12 overall appearances last season, Jacobs is the primary candidate to begin the season as the Jaguars’ strong side linebacker. The 2018 seventh-round pick has already mostly exceeded expectations and he’ll have a chance to take on a larger role in his second season as the team’s likely Week 1 starter. He doesn’t have much competition at the position. But with defenses around the league relying on nickel packages far more frequently to deal with three-receiver sets, Jacobs should see the field less often than his counterparts.

WLB Quincy Williams
Let’s move onto the candidates to replace Smith at weak side linebacker. This is the Jaguars’ biggest area of concern on the defensive side of the ball.

The Jaguars’ best-case scenario is Williams winning the job, because he probably holds the most potential to develop into a long-term solution at the position. He’s a third-round rookie out of Murray State, which makes him raw, which could make it difficult for him to capture the starting job before the season begins. But if he’s able to pick up the defense and adjust to the NFL, he should be the starter. He has the makings of a potential standout performer.

During his final season at Murray State, Williams racked up 111 total tackles, 9.5 of which went for a loss. In his pre-draft profile of Williams, NFL.com’s Lance Zierlein noted his explosiveness, speed, and aggression — and it’s his speed that has stood out so far at training camp.

It’s a little tough to see due to the camera angle, but look at how quickly Williams covered the running back in the flat on the opposite side of the field:

Again, in the clip below, watch as Williams covers the running back, this time on the nearest sideline.

Marrone has taken notice of Williams so far at training camp.

“I really think at the end of the day — and I know a lot of guys on our team are going to get pissed at me for saying this — when the ball snaps, he might be the fastest player on our football field right now. I mean, when you watch him, he is fast,” Marrone said, per The Athletic. “I know (receiver) Dede (Westbrook) will be pissed.”

Back in May, Jaguars.com writers John Oehser and Brian Sexton both highlighted Williams in their look at the linebacker group and projected that Williams would win a starting spot. It certainly seems like Williams should be considered the favorite to start. Even if he’s not ready to start Week 1, he should be expected to contribute throughout the season.

He’ll be the key to replacing Smith.

WLB D.J. Alexander
Alexander has more experience than Williams, which could give him a chance to begin the season as the starter on the weak side. Entering his fifth season after spending two with the Chiefs, one with the Seahawks, and this past season with the Eagles, Alexander has experience in the sense that he’s been around the league for a while and has played in 56 career games, but it’s worth noting that he’s only made one start in the NFL. He’s made 13 combined tackles – in his entire career.

Still, simply being around the NFL might help him pick up the Jaguars’ defense before Williams does. If Alexander doesn’t start, he should still hold value as depth. But if all goes according to plan, Alexander should be a backup.

MLB/WLB Najee Goode
Goode is the most experienced of the group, but he’s likely to begin the season as a backup. With Ryan hurt, he could be positioned to fill in for Jack in the middle if Jack were to go down with an injury. He could also fill in on the weak side. Entering his eighth NFL season with his fourth NFL team, Goode has played in 80 career games. Like Alexander, he’s seldom been a starter (four starts in all).

He’s best-suited for a backup role. Again, this highlights why the Jaguars are best off with Williams taking Smith’s starting spot and why they need Ryan to get healthy. They don’t really have any other options.

A fourth-round pick of the Chiefs in 2015, Wilson spent three seasons in Kansas City and this past season with the Rams. He made 21 starts across those four seasons, averaging 28.5 solo tackles per season. He’s a decent depth piece, but if Williams plays up to his potential, he should be able to hold off Wilson for the starting job vacated by Smith.

DE Josh Allen
Allen is not an option.

The rookie is best known for his pass-rushing ability, but there was some speculation after the Jaguars took him early in the first round that the team could switch to a 3-4, deploy Allen, who played linebacker at Kentucky, as a linebacker, and thus, occasionally drop him back into coverage.

It doesn’t sound like that’ll happen, though. At least that’s what defensive coordinator Todd Wash said in June.

He added that “Josh Allen was drafted to be a defensive end,” which should end all speculation.