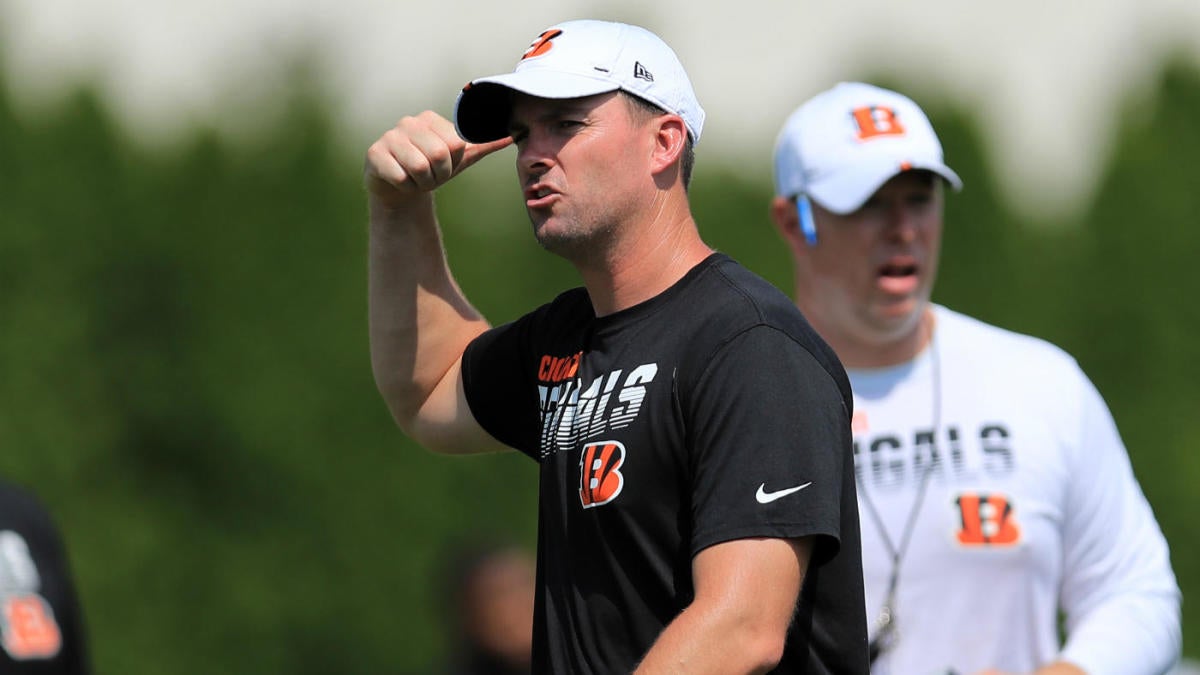 CINCINNATI — Not even a week into Bengals training camp, and before his team even put on full pads, rookie head coach Zac Taylor was already down three starting offensive linemen and two starting receivers. Other than that, things are going just great!

As if the transition going from a relatively unknown offensive assistant under Rams wunderkind head coach Sean McVay to replacing a grizzled veteran coach with the Bengals — Marvin Lewis, who had reached the playoffs in five straight years not that long ago and ran the team for the last 16 years — wasn’t enough of a task already. Now Taylor, 36, is already dealing with his first injury crisis, with it striking the very core of his offense.

The Bengals have been undermined by suspect lines for years now; it was not a position group of great talent or depth even before the injuries/retirements. Now, it looks like a significant cause for concern.

Taylor, however, is unwavering in his spirit and optimism. Yes, Clint Boling, the most accomplished veteran on that line, opted to retire, and Jonah Williams, the team’s top pick and projected left tackle, was out for the season before camp even opened. And starting center Billy Price, their top pick the year before that who battled injuries much of last season, is back on the injured list. Oh, and A.J. Green, future potential Hall of Famer who has battled injuries seemingly the last five years, sprained his ankle at the first practice of the summer and will miss at least a few regular season games. And lest we forget, John Ross, the team’s top pick in 2017 who entered the league injured, well, remains injured, out of camp with a hamstring issue.

“You just think back to what we’ve said since Day 1 — that we know we will face adversity this year, and we’re going to keep our head held high no matter what comes our way, and we’ll overcome it together,” Taylor told me this weekend as we sat in his office before a recent practice. “We’ve talked about that from Day 1, and if you face that adversity, and all of a sudden you become this different person — it’s just the first test that has come our way, and we expect to overcome it.”

Taylor is unwaveringly chipper. He is still savoring this opportunity to impart his ideas and philosophies and leadership to an entire football team at the highest level possible. Everything is fresh and new. It’s going to take more than a bevvy of injuries to a group of vital players to bring him down. Even if it strikes at the heart of the offense he is installing, and even if it has resulted in guys like Cody Core (30 total catches through three seasons) and Josh Malone (seven receptions in two seasons) lining up with his starting offense for the foreseeable future.

“It’s the only depth chart (at receiver) I’ve known since I’ve been here,” Taylor explained. “A.J. and John really haven’t been with us. John was with us for maybe five days in the spring, and A.J. got maybe two days of routes on air. So since we walked in the building as a staff this is the receiver room that we’ve known.

“And it is good knowing we’ve got two starters that will come back at some point, but these guys have really been locked in. Our other receivers in the room are dialed in and know they are competing for jobs right now, and everyone has stepped up to challenge. But we’re only a few days in.”

The problem, of course, is whether anyone could count on Green and Ross staying healthy for any prolonged period of time whenever they do come back. And juggling that offensive line is going to be a chore, though Taylor is professing confidence in the rag-tag bunch currently assembled.

He does, however, have a few things he can bank on. There is talent on defense. Things had gotten stale in Cincy and change is being embraced. Ownership has dipped into its pockets — not always the case — to spruce up the facilities and infrastructure at Paul Brown Stadium. And the players seem enthused about having someone much closer to their age and life experience now in charge.

“It’s been fun being around him,” veteran linebacker Preston Brown said. “He had great command of the whole team. When he walks in the room he has a presence about him, and people respect it, just to see how much confidence he has a young guy to come in here as his first head coach opportunity. He’s really taken the bull by the horns and he’s making a run for it. We all respect him and we’re going to go out and play as hard as we can for Coach.

“It’s cool to have some young guys in the room with us. Usually in the NFL you have those 75-year-old coaches walking around, and now we have coaches doing drills with us and running around and playing basketball with us and all this stuff you usually don’t see around the league. But that’s where its trending to.”

Running back Giovani Bernard also addressed Taylor’s role as part of the new emphasis of youth in the coaching ranks among NFL teams.

“You know how young he is and we realize that’s what the NFL is coming to; it’s evolving into the young coaches who can relate to the players a little bit more, not just on the field but off the field, and they have things going on as well,” Bernard said. “Coach Zac has been doing awesome things. We love his playbook. We love what he’s doing. His energy is second to none, and the way he installs the plays as well, he doesn’t necessarily start yelling at you or trying to beat it into your brain. He really focuses on the little details and really expects everybody to understand every position as well.”

Taylor was considered by many the brightest mind on McVay’s staff not named McVay, and his intentions and ideas have merit. But if this top end of this roster has already been compromised by injury, and it’s depth already tested, even the most accomplished of coaches would be facing steep odds. September could be trying, and the AFC North is no joke.

What Dalton brings to the table

Taylor spoke passionately about quarterback Andy Dalton – who many around the league believe could be elsewhere next season without a strong performance. Dalton’s intellect and coachability quickly endeared him to this staff (though we’ll see what the season brings).

“He’s been around so many different coordinators and each taught him a little differently,” Taylor said. “So he knows when, ‘Zac you put us in bad play,’ and you can trust him to get us into a better play. Those are the really strong positives to having a quarterback who has seen so much bad ball and recognize bad looks and adjust.”

The team is also high on rookie Ryan Finley, who Taylor believes could end up being a steal in the fourth round.

The Bengals lined up the following first-string offensive line at the practice I observed (which was more like a walk-through as players prepared to don the pads for the first time): Cordy Glenn, Christian Westerman, Justin Evans, John Miller, Bobby Hart. Yikes.

Taylor, of course, is making the best of it.

“Truthfully, we feel pretty good about four of these positions right now,” he told me. “It’s the left guard battle that’s going on right now, and creating that depth across the line of scrimmage … We just want to see where that chemistry is at and who works well together and seeing what was the communication like, did they play well together, are their combination blocks a little cleaner than these other two guys?”