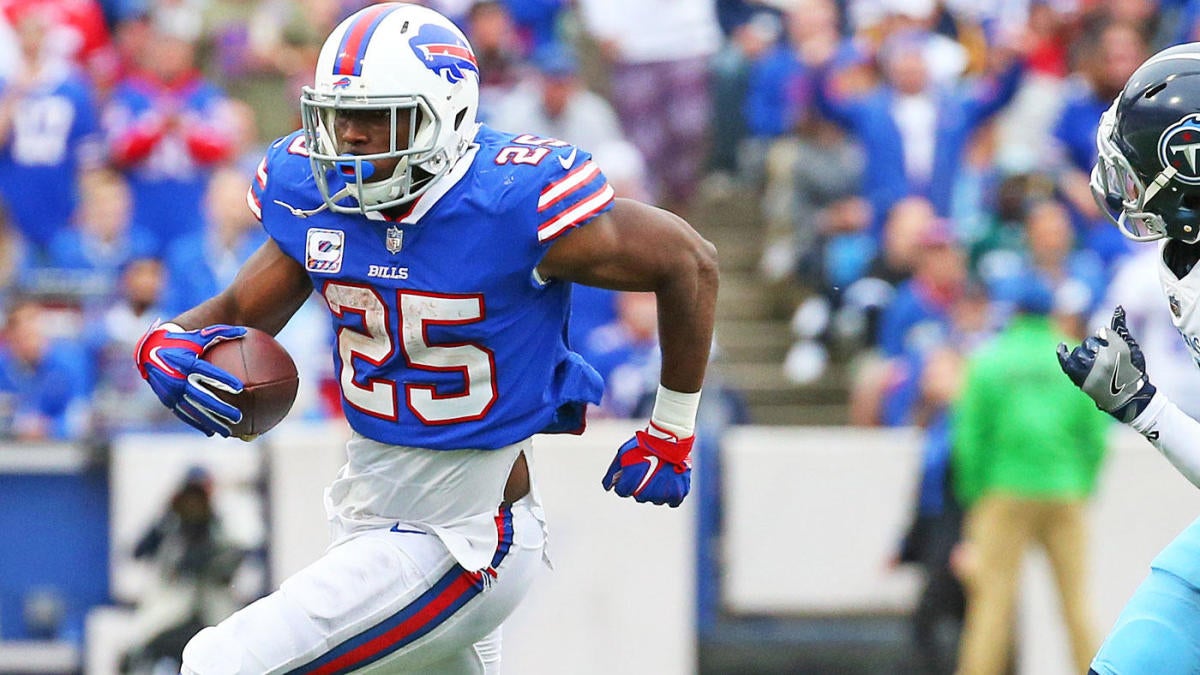 LeSean McCoy is the longest tenured offensive player on the Bills, and this offseason, Buffalo’s front office emphasized rebuilding the rushing attack to complement Josh Allen and some of his new pieces in the pass game.

While Allen’s development is most vital for the Bills this season and beyond, Buffalo still wants to run the football — the team finished tied for sixth with 468 rushes a season ago. GM Brandon Beane signed two running backs (Frank Gore and T.J. Yeldon) in free agency and picked electric ball carrier Devin Singletary in the third round of the 2019 Draft.

Up front, a whopping six offensive linemen were acquired on the free-agent market before Oklahoma’s road-grader Cody Ford was selected in the second round. But how is this suddenly crowded running back room going to shake out?

By essentially all standards of measurement, McCoy had the worst season of his career in 2018. He averaged just 3.2 yards per carry, had a Football Outsiders’ Success Rate — success differing based on down and distance — of just 37 percent, the third-lowest among 47 backs with 100 or more carries, and his 11.6 attempts per game were the fewest he’s averaged since his rookie season.

Scatback Marcus Murphy did average 4.8 yards per carry on 52 attempts in 2018, but Chris Ivory — second on the team in carries — averaged 3.3 yards per rush, and on 21 attempts Keith Ford averaged 3.8 yards per.

If we’re going to (correctly) say offensive lines deserve the vast majority of praise for quality rushing performances, then they deserve the bulk of the criticism when a rushing attack is lackluster.

Per Football Outsiders, Buffalo finished 30th in Adjusted Line Yards — a metric that assigns credit and blame to blocking units — at just 3.89 yards per attempt. The Bills offensive line finished 26th in Pro Football Focus’ rankings at the end of the season.

That isn’t to say we should absolve McCoy of his bad statistics last season. His film showed a springy, elusive runner who tried to do too much, too often — think an extra jump cut or two — on many of his runs, seemingly because he was expecting the blocking to be subpar. Most of the time he was right, Buffalo’s line failed to create lanes. But despite his bouncy movements and elite vision, McCoy’s freelancing was a problem.

Next Gen Stats’ “Efficiency” metric tracks “total distance a player traveled on rushing plays as a ball carrier per rushing yards gained. The lower the number, the more of a North/South runner.” McCoy finished with the third-highest “Efficiency” figure among qualifying backs, which gives you a good idea as to how much he danced across the field in 2018.

During his entire career, McCoy’s been best when he can trust his blocking then tap into his outrageous agility at the second level. He’s probably lost a half step, but not all of his freelancing attempts went poorly last year, and he still made a host of defenders look silly in space. Because he’s in great shape, has a knack to avoid big hits, and hasn’t lost much of his movement ability, McCoy is positioned for a bounce back year behind Buffalo’s revamped offensive line. But don’t be surprised if it takes a few games for the team’s new blocking unit to gel. Should we expect a 1,200-plus yard season at close to 5.0 yards per attempt? No. But I expect him to get somewhere between 175-200 rushes and average over 4.0 yards per once again.

Gore is one of the most natural runners in all of football, and his triumphant season in Miami in 2018 at the age 35 is proof of that if his 14,000-plus yards in his first 13 seasons before that didn’t provide enough supporting evidence.

He averaged 4.6 yards per carry on 156 rushes last year, and his 5.0 yards-per-touch average was the highest he’s had in a single season since 2012.

The Dolphins did finish 14th in Adjusted Line Yards, so for as porous as the team’s offensive line was protecting its quarterbacks, it did a relatively good job paving rushing lanes. Gore’s Success Rate was 50 percent, which put him in 17th place out of 47 backs with over 100 carries.

Like McCoy, Gore has always seemed to have a sixth sense to see blocks and creases before they materialize, and while he won’t outrun many second and third level defenders, his cuts are highly efficient.

Speaking of efficiency, Gore had basically the polar opposite running style season of McCoy in 2018. He finished with the second-lowest “Efficiency” score per Next Gen Stats, meaning he got North-South in a hurry.

After three-straight years getting over 260 carries in Indianapolis from 2015 to 2017, Gore’s 156 rushes seem more reasonable to maximize his effectiveness at his age. In Buffalo this year, he should be in line for between 125-150 carries, including a large portion of the club’s rushes in short yardage. Hitting the 4.0 yards-per-carry threshold would not surprise me.

On the surface, Yeldon was a superfluous addition to the Bills roster. After the selection of Devin Singletary in the third round, he seemed even more unnecessary.

In a crowded backfield in Jacksonville behind former No. 4 overall pick Leonard Fournette, Yeldon quietly averaged 4.4 yards per carry on 153 attempts over the last two seasons. But I have a hunch his pass-catching prowess was why Buffalo targeted him in free agency, especially with Gore not being a complementary back who brings a ton to the field as a pass catcher.

Yeldon saw a hefty 78 targets last season and turned those into 55 catches for 487 yards (8.85 yards per grab) with four receiving touchdowns. His yards-per-reception average has increased from 6.2 to 7.5 to 8.8 in each of the last three years, and Yeldon’s made at least 30 snags in each of his first four NFL campaigns.

Sure, some of the pass-game involvement came via checkdown-happy Blake Bortles, but Yeldon is clearly comfortable catching the football out of the backfield, and he’s gotten more efficient accumulating yardage in that facet of the game over the past three seasons.

As a runner, he has a slightly above average mix of bounce and power. His Success Rate was 48 percent (25th place) in 2018 behind the Jaguars offensive line than finished 21st in Adjusted Line Yards.

Despite his trending upward play and receiving specialty, Yeldon feels like a free-agent acquisition that needs to have a solid camp and preseason to make the team, although I’d be slightly shocked if he’s on the outside looking in come final cuts.

Singletary was my No. 1 running back and No. 64 overall prospect in the 2019 class. My pre-draft comparison for him was Maurice Jones-Drew. Among my top five backs — Singletary, David Montgomery, Justice Hill, Miles Sanders, and Josh Jacobs — I gave Singletary the highest “vision” grade, the second-highest “contact balance” grade, and he tied for first in the “elusiveness” category.

His combine was mostly disappointing, although he did measure in at a rather compact 5-7 1/2″ and 203 pounds, the former Florida Atlantic star ran a slow 4.66 in the 40, and his 7.32 time in the three cone placed in just the 8th percentile at the position. However, that three-cone time did not show up on film whatsoever. He plays faster and is significantly more nimble on the field than his less-than-stellar combine would indicate.

Singletary was the most electric, hard-to-get-a-hand-on runner of all those I scouted in the 2019 class. Per Pro Football Focus, he finished second in the class among backs with at least 100 carries (behind Montgomery) with a forced missed tackle per attempt rate of 0.36. He forced 96 missed tackles on 267 touches last season.

He has the ability to bounce off weak tackle attempts too. PFF noted during the pre-draft process that the smaller Singletary actually finished with a higher yards after contact per attempt figure (3.9 yards) than Montgomery (3.5) last year.

And despite his diminutive stature, Singletary proved to be capable of handling bell cow duties in college. In his final two years with the Owls, he toted the rock 562 times at 5.8 yards per carry with — wait for it — 54 rushing touchdowns. Yeah. 54.

Singletary finds himself in a running back room featuring two potential Hall of Fame veterans and a free-agent add. But his make-you-miss talent and relatively fresh legs should lead to early contributions then more volume in the final two months of the season. Then again, he has enough skill to beat out Yeldon for the No. 3 back job right out of camp. I envision Singletary finishing his rookie year with somewhere between 4.5 and 4.8 yards per rush, which will put him in line for a big spike in carries next season.