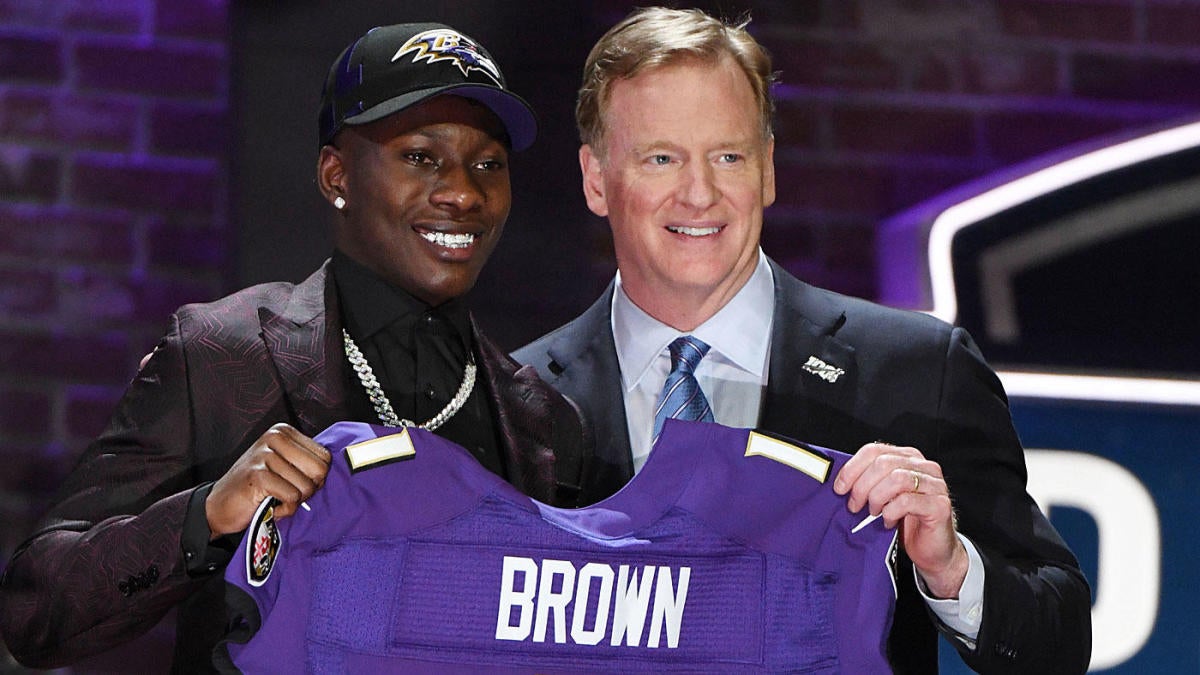 The Ravens can’t run on every down.

With Greg Roman at offensive coordinator, a stellar run-blocking line, Lamar Jackson at quarterback, and a talented, complementary group of running backs — Mark Ingram, Kenneth Dixon, Gus Edwards, and Justice Hill — Baltimore is likely to finish in the top 3 of rushing attempts in 2019 after leading the league in 2018.

But Jackson’s effectiveness as a passer will be key to the Ravens taking the next step as a team this season. And there are plenty of new faces in the receiver room. We know who veterans like Willie Snead, Seth Roberts, and Michael Floyd are, and the latter two aren’t locks to make the roster.

Let’s take an up-close look at some of the young receiving options on Baltimore’s roster.

As the CBS Sports’ summer series examining training camp position battles moves forward, let’s analyze the Ravens’ first and second year wideouts in an attempt to pinpoint who will emerge as primary passing-game options in 2019.

Scott missed his entire rookie season with a major hamstring injury. Discussing his collegiate career is the most necessary way to glean how good he can be in 2019 and beyond in Baltimore.

He finished as my No. 94 overall prospect in the 2018 class and No. 12 receiver. The Ravens picked him in the fourth round at No. 132 overall, and he was the 14th wideout picked, so they got good value with him.

The nearly 6-foot-5 Scott had 1,079 yards with nine touchdowns in his final season at New Mexico State but did account for just 24.4 percent of the team’s receiving yards, a lower figure than you’d like to see for a pass-catching prospect.

I liked his overall, well-rounded game, especially his contested-catch ability and smoothness as a route-runner for his size. I wrote a scouting profile on him in December 2017, and pinpointed many of his plus skills with a host of film GIFs.

Scott had dominant stretches as an above-the-rim wideout and wasn’t stiff after the catch. However, his combine was mostly disappointing. He ran 4.56 in the 40 and had had a three-cone and short shuttle in the 10th and 12th percentile respectively. His broad jump of 124-inch did place in the 75th percentile, by far his most impressive event in Indy. His film said third-round pick. His athleticism scores said fifth-rounder.

At nearly 6-5 with ridiculous long 33 1/2 arms — 89th percentile at the receiver spot — and large 10-inch hands, Scott clearly has a gigantic catch radius, and he certainly knows how to get to the football inside every inch of it.

Losing his first year in the NFL to injury makes it more difficult than most second-year pros to acclimate to the league. But he’s a deep sleeper on a club with multiple job openings at receiver because of his rebounding ability and flexibility that may not be outstanding but is certainly more impressive on the field than it was at the combine.

Lasley was my No. 163 overall prospect and No. 25 receiver in the 2018 class. Baltimore picked him at No. 162 overall as the 18th receiver of the board. Nearly identical evaluations overall but there are a handful of receivers I would’ve picked before him.

Either way, Lasley played faster and more explosively than his timed athleticism. At UCLA, he was Josh Rosen’s go-to down-the-field threat but ran 4.5 in the 40, not a brutal time — 55th percentile — but he seemed like one of the fastest wideouts in college football in his final year with the Bruins.

He had 1,264 yards — 28.2 percent receiving-yard market share — with nine touchdowns and a robust 18.3 yards-per-reception average.

At 6-1 and 203 pounds, Lasley has great size as a downfield burner, and he showcased dynamic movement ability on intricate routes at the intermediate level. But for as easily and repeatedly as he ran under deep balls, his hands overall were simply not good in college and were likely the main culprit in his fall to the fifth round.

In 2018, while healthy, Lasley was never activated on gameday. e missed the opportunity to gain valuable regular-season experience as a rookie. He has a chance to carve a role as a long-ball specialist, but Lasley needs to become significantly more reliable with his hands to earn playing time in Year 2. I would be decently surprised if he becomes a consistent threat in Baltimore’s offense in 2019.

Brown was the first receiver off the board in the 2019 Draft at No. 25 overall but came in at No. 40 overall on my final Big Board and was my No. 7 wideout.

I didn’t hate Brown as a prospect. His lower-than-consensus ranking was simply based on a lower grade than an assortment of big-bodied wideouts.

I wrote a scouting profile on him midway through last season. At that point, I saw him as a tiny, electric receiver much closer to Brandin Cooks or Tyreek Hill than Tavon Austin due to his proficiency running a variety of routes and ability to come down with the football in traffic despite his small stature.

After that article, written on October 25, Brown’s was held under 77 yards in four of his final six outings but did have a 142-yard game against Oklahoma State and a 243-yard eruption against West Virginia in late November. Despite his 1,318 yards on the year, Brown only accounted for 29.1 percent of the team’s receiving yards. He was held without a catch in Oklahoma’s loss to Alabama in the College Football Playoff before which it was revealed he was dealing with a foot injury.

Brown’s hot start faded in the 2018 season and ended with him not being 100 percent. He had the dreaded but not totally devastating Lisfranc surgery in February, which led to him missing the combine. He measured in at just under 5-10 and only 166 pounds in Indy. Brown was placed on the non-football injury list which is designated for players injured outside of team facilities.

For me, his NFL success hinges on his ability to stay healthy and whether or not his sub-170 pound frame can withstand the rigors of a full 16-game schedule. I’m worried about both. I ultimately compared him to Santonio Holmes.

But, if Brown can get a clean bill of health, he has the elite-level explosiveness, fluid route-running skills, and craftiness after the catch to become a dynamic modern-day target in today’s NFL.

Boykin was a fascinating, somewhat enigmatic prospect. His on-field play didn’t generate loads of buzz in the scouting community. Then the combine happened, and Boykin put on a show.

Boykin is the classic “why wasn’t he more dominant?” prospects at the receiver spot. He had 872 yards with a decently low 26 percent receiving-yard market share in his final season at Notre Dame but did have a team-high eight touchdown catches.

His film featured a variety of tremendous contested-catch grabs and jagged, twitchy routes. At the combine, Boykin turned in an all-time performance. At just under 6-4 and 220 pounds, he ran 4.42, had a 43.5-inch vertical, a 140-inch broad jump — 99th percentile — and a blistering 6.77 three-cone time.

Everything about Boykin’s size and athleticism screamed elite prospect. And his on-field movements were freakish. The production was not. That’s worrisome.

His outrageous combine effort is reason for optimism and will likely lead to plenty of reps early in his career.

Boykin is a dark horse to emerge as a Martavis Bryant-type size/speed/athleticism/ball skills specimen in Baltimore, but I do expect the low-volume stinker games to pop up like they did in college. In 2018, eight of his 13 contests featured fewer than five grabs with fewer than 75 yards.

Wesley went undrafted. I didn’t think he should have. He was my No. 94 overall prospect and No. 15 wide receiver in the 2019 class.

At a relatively lanky 6-4 and 206 pounds, Wesley’s combine did not match his movements on the field. He wasn’t a spindly, awkward mover at Texas Tech, and the ease at which he changed directions while running routes as well as after the catch was part of the reason I was so high on him as a prospect. At the combine, he had below-average agility-drill times but a 37-inch vertical. He didn’t run the 40.

While Wesley did put some “bad” drops on film, he was probably the most natural hands catcher of any receiver in his class. I’m serious. The Red Raider product routinely snatched footballs outside and above his large frame and showcased plus body control near the sideline.

He needs to add strength — and maybe some weight — to deal with press coverage and more physical cornerbacks at the pro level. As a UDFA, Wesley will be put in the pressure situation to make the absolute most of what will likely be limited reps in camp. However, a strong summer from the former Red Raiders star would not be surprising. Neither would him sneaking onto the 53-man roster and contributing in Year 1. However, a redshirt-ish season as a rookie and a big jump in Year 2 is more likely.