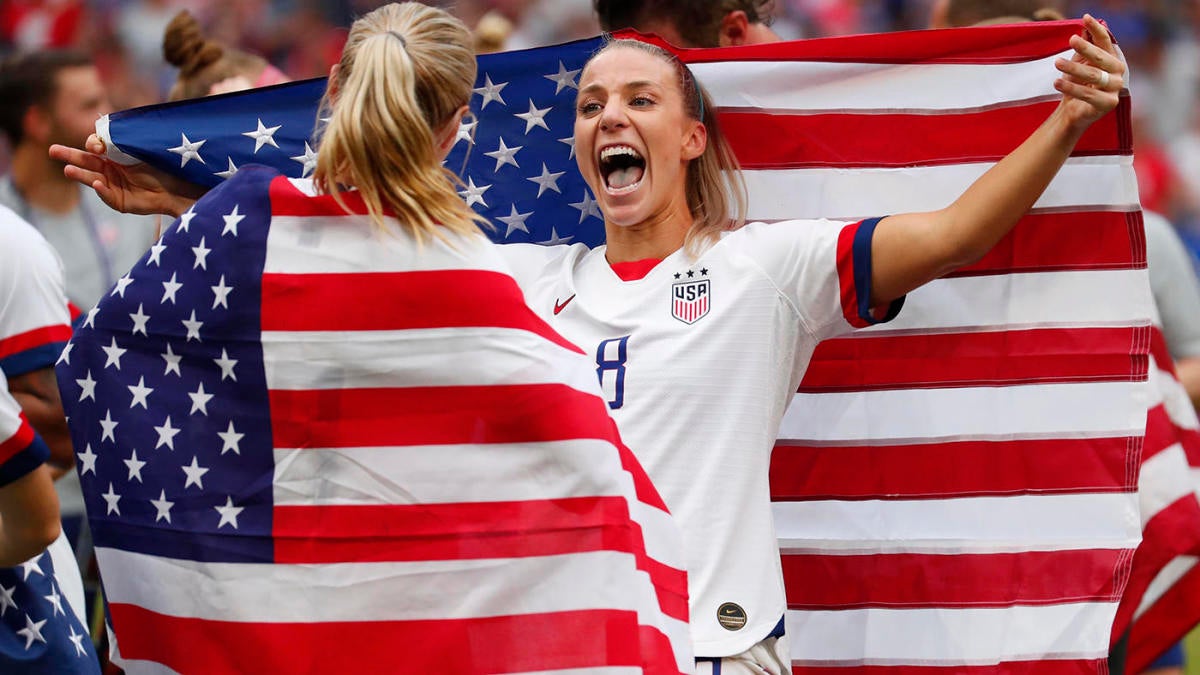 The Philadelphia Eagles officially opened training camp on Thursday, and for the first time in a long time, Zach Ertz is not the biggest sports story in his own family.

Seventeen months after the Pro Bowler scored the go-ahead touchdown in the Eagles’ first-ever Super Bowl victory, he’ll be working out of the shadow of his wife.

Julie Ertz, the 27-year-old midfielder, has kept track of her and Zach’s career accomplishments since the two got married in March 2017. They’re competitive people (shocker), so the list helps them see who’s “winning” more. And after Julie helped propel the U.S. women’s national team to its second straight FIFA Women’s World Cup championship earlier this month, Zach’s Lombardi Trophy started to look a little lackluster.

“I mean, our tallies are mostly, like, card games,” Julie says with a laugh. “I’d say I’m on top, but you’d never get him to admit it.”

Truth be told, it’s not really Julie vs. Zach in the Ertz household. It’s Julie and Zach.

Their shared competitive streak is a central part of the marriage, not to mention their respective careers. But anyone who’s ever encountered the two knows better than to pit them against each other. After certain headlines during the Women’s World Cup referred to Julie only as “Zach Ertz’s wife,” the Eagles star rocked a USWNT jersey with “Mr. Ertz” on the back. He then wrote “A freaking baller and her husband” as a caption to a photo with Julie.

It goes deeper than that, though. Zach and Julie are there for each other even when, physically, they are not. As ESPN’s Tim McManus reported, the couple is often separated for months at a time — Zach planting himself in Philly and Julie often residing in Chicago, where she plays for the Red Stars of the National Women’s Soccer League.

“I talk to him all day, from the second I wake up,” Julie says. “Usually gamedays, in the morning, are uneventful for me, so I just kind of relax until meetings. But we FaceTime on the bus every single time before I get there, then he just sends me a text when I have to go: ‘Go dominate.’ I say, ‘Love you, bye,’ and that’s that.”

Like competition in general, sports are an obvious connector for the family. Zach traveled to France to watch USA win it all. Julie traveled to Minnesota to watch the Eagles win it all. Both have admitted being more nervous watching their spouse than playing in their championships.

Julie has ensured her USWNT teammates “are definitely huge Zach fans,” even if there are “some that I have to convince more than others to root for the Eagles.”

When they’re together, they even take turns trying each other’s sports.

“I’m good at football without having to get tackled by him,” Julie says. “But Zach’s also a really good keeper. He’s good with his hands, obviously, and he takes up most of the goal.”

Their togetherness doesn’t end on the soccer and football fields, though. Much like the Super Bowl champion Eagles team, the 2019 USWNT made waves not only for historic scoring, elite depth and clutch heroics but for community activism along the way. USWNT captain Megan Rapinoe famously sparred with U.S. president Donald Trump over perceived inequalities in America, and the entire team has championed a lawsuit asking for pay equal to the U.S. men’s national team.

Julie specifically saw the World Cup run as a tool to further build up women’s sports.

“I think it’s amazing, the power that sports have,” she said. “For me, with our team, the main goal is to try and grow women’s sports and grow soccer, in general, in the U.S. Just to be a part of that, to give those opportunities to young girls who want to be in our shoes, to leave the game better than when we found it, is a huge goal for us. Any time you can help do that, that’s world-class.”

The Women’s World Cup final victory has already spiked interest in the NWSL, spawning major sponsorship and TV deals for the women’s league.

But Julie’s mission, when coupled with Zach’s, goes even further. Both of them have books out with Harvest House Publishers this year. They’re geared toward kids and preteens, coinciding with their Ertz Family Foundation‘s work to build up needy families at home and abroad. And both present deeper questions — questions that Julie herself says she has wrestled alongside her husband over the years.

“For me, it was like, sports was everything,” she said. “It’s who I was. But what happens when adversity hits, or you get self-doubt? I think it’s so funny, because you read things like, ‘I can just let it go,’ but it’s also OK to share your scars. We’ve all been there. You’re not alone. When you watch on Sunday, or game day, you watch me play, but maybe you don’t know my story, or my thoughts on character.”

In “Chase Your Dreams,” Julie’s book, she shares exactly that. She highlights humility over stardom and faith over fame, echoing sentiments often touted by Zach and some of his high-profile Eagles teammates in recent years.

“I think time has really allowed us to reflect,” she said. “We’ve both been in our careers for seven, eight years now, and obviously when you’re young, sometimes that fades your vision of the bigger picture. It really helps now, with Zach being my support, asking us to reflect. When you’re in it, you’re going, going, going and forget to see where you’re at.”

Now, Julie sees where she’s at, and remembers to ask herself: “Where do you put your identity?”

She hopes the next generation does the same. And she’s got a husband who’s right there with her.