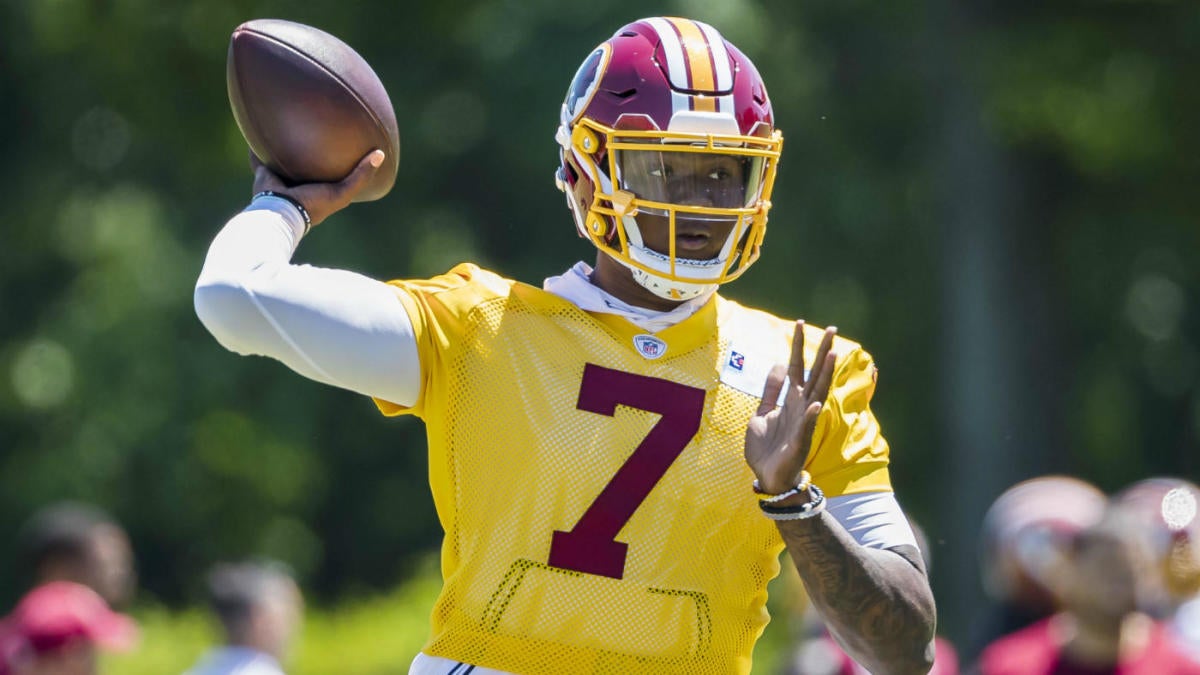 The plan was for Alex Smith to replace Kirk Cousins. The Redskins traded for Smith in January 2018 and the transition from one veteran quarterback to the other was supposed to be seamless. Instead, Smith and the Redskins muddled their way through the first half of the season before Smith suffered a horrific leg injury that puts his NFL career in jeopardy.

Smith’s season ended in Week 10; the Redskins were 6-4 and on their way to a 7-9 finish, and Smith ranked 29th in value per play among all passers, according to Football Outsiders‘ metrics, sandwiched between Case Keenum and Sam Darnold. Making matters worse: backup Colt McCoy also suffered a season-ending injury and Washington was left with Mark Sanchez and Josh Johnson over the final month.

This explains why in March the Redskins traded for Case Keenum, the man who had a career year in Minnesota in 2017 only to come back to earth with the Broncos last season. But the team wasn’t done; Washington had the 15th-overall pick in the 2019 NFL Draft and quarterback was still clearly a priority. In a first round full of surprises, one of them was seeing Dwayne Haskins still on the board midway through the proceedings. But he was and the Redskins pounced, grabbing the the Ohio State star who completed 70 percent of his passes and tossed 50 touchdowns during the 2018 campaign.

And with those two moves the Redskins’ depth chart had been remade. Haskins was the clear-cut future of the franchise while Keenum and McCoy would battle for the No. 2 job. In the wings, Smith would continue to rehab with no set timetable on a possible return. So with training camps set to kick off this month, what does each player bring to the quarterback competition?

Here was our pre-draft scouting report: At 6-foot-3 and 231 pounds, Haskins fits the mold of a traditional pocket passer. He throws with great accuracy and confidence, has a strong arm, and can throw from various arm angles. He moves well in the pocket, and while he’s not a running quarterback, can create throwing lanes and while still throwing with precision, and can also gain yards with his feet. He only has one year of experience and probably isn’t ready to start immediately at the NFL level. He also played out of the shotgun at Ohio State, and while that isn’t disqualifying, some NFL teams want their quarterbacks to be able to play under center too. Haskins also wasn’t asked to throw many deep passes — he ranked 37th among all FBS quarterbacks in average depth of target (9.7 yards), according to PFF — and he needs to become more consistent with his footwork, which should come with experience.

Ah yes, the “probably isn’t ready to start immediately” trope. Haskins went through offseason workouts like someone who has every intention of starting. The particulars will be sorted out in the coming weeks and months but coach Jay Gruden has been impressed from Day 1.

“You see the ‘wow’ plays and you’re like, ‘Jesus,'” Gruden said during minicamp. “When he’s on, there’s nobody you’d rather have than Dwayne. Really. It’s pretty. He stands tall; he has a cannon, and he can quicken up his release. He’s got great touch. Strong, powerful arm; strong, powerful body. But sometimes when he’s off, he’s abnormally off. It’s kind of weird.”

He also feels like he has something to prove after two other quarterbacks — Kyler Murray and Daniel Jones — were taken ahead of him in the draft.

Here’s the problem, however; the Redskins’ offense ranked 29th a season ago — 20th in rushing, 29th in passing — and questions remain up and down the roster. Wide receiver Josh Doctson hasn’t lived up to his first-round billing and while Terry McLaurin has a chance to be special after catching passes from Haskins at Ohio State, he’s a rookie. The same holds for Kelvin Harmon, a sixth-round pick who we pegged for a Day-2-at-worst selection.

Running back Derrius Guice returns after missing his rookie season with a torn ACL and while Adrian Peterson started 16 games and rushed for more than 1,000 yards in ’18, he’s 34 years old.

Perhaps most importantly: In June, left tackle Trent Williams demanded to be traded or released and vowed not to play for the team this season.

The good: In 2017, Keenum completed 67.6 percent of his passes with 3,547 yards, 22 touchdowns and seven interceptions and helped the Vikings to a 13-3 record and the NFC Championship Game. The bad: Minnesota let him walk after the season and he signed a two-year, $36 million deal with the Broncos. One year into it — and after a disappointing 6-10 record — Denver shipped Keenum to Washington, where he’ll earn $3.5 million on a one-year deal. But he’ll also be in the third offense in as many years, which puts him at a disadvantage, at least compared to McCoy. “I view new offenses like learning new languages,” Keenum explained last month, via the team’s website. “Certain offenses are like English to Chinese. Certain offenses are like Portuguese to Spanish. I would say I’ve been in Spanish before and this is more Portuguese. There’s some carry-over, but some little tweak of the same word might mean something different in a different language. Part of it is trying to forget some of the old stuff and replace it with new stuff.”

When asked if he’s become proficient at learning new offenses during his eight-year career that has included six teams, Keenum added: “I think so. There’s no Rosetta Stone for the West Coast offense though.”

Keenum is at his best as a backup. And this isn’t a slight; he’s a savvy veteran who does a lot of things well, but he’s not a 16-game starter at this stage of his career.

A year ago, Smith was the Redskins’ unquestioned starter. Now he’s still recovering from a broken leg, as is McCoy. But while it’s highly unlikely that Smith sees the field in 2019, when McCoy is cleared to return he’ll find himself in the mix for the starting job.

“We would love for him to take some reps, but obviously his health is more important right now than anything, and that is the most important thing for him,” coach Jay Gruden said about McCoy back on the first day of minicamp, via NBCSports.com. “When his time comes it will come quickly. He will be ready.”

Smith’s NFL future is unknown but he reached an important milestone in his recovery this week: the removal of the external fixator that was stabilizing his leg eight months after the devastating injury.

“The last eight months have been nothing short of crazy,” Smith’s wife, Elizabeth, wrote on Instagram. “Although it’s not over, today is a big milestone. We are shedding the weight Alex has been carrying (literally and figuratively). It’s one step closer to the goal. The resilience, determination and mental fortitude of this man is unmatched.”

In June, Smith indicated that he still plans to pursue a comeback.

“That’s the plan. That’s the plan,” he told Fox5 DC’s Angie Goff at the time. “Steps. I’ve got to conquer some more steps before I get there.”

Now 35, Smith signed a four-year, $94 million deal ($71 million guaranteed) with the Redskins last offseason. He has a dead cap of $42 million this season and $32.2 million next season, according to Spotrac.

So who ends up under center when the Redskins travel to Philadelphia for the season opener on Sept. 8? Gruden says Haskins has earned the right to be in that conversation.

“Oh, for sure,” Gruden said earlier this offseason, via ESPN. “I’d be silly not to. He’s put enough out there on tape to say he deserves a shot, without a doubt. I don’t know quite what he can do in the NFL in this system because it’s new to him, but his ability warrants the fact that, hey, let’s take a peek at this big son of a b—-.”

But former Redskins quarterback Joe Theismann warns that Haskins should be brought along slowly.

“To put him out there early against those teams, it’s just a formula for disaster for the team, for Jay [Gruden], for the fans and everybody else,” Theismann said during a radio appearance on 106.7 The Fan last month. “I think the young man is our future, and let’s protect the future, instead of throwing it out there right now and saying, ‘Okay, go get ’em.’ The schedule we’re playing is not a ‘go get ’em’ schedule.”

Whomever wins the job, this much is certain: Vegas doesn’t expect much out of the 2019 squad. The Redskins are 100-to-1 to win the Super Bowl, which are better odds than just two other teams: the Cardinals and Dolphins.